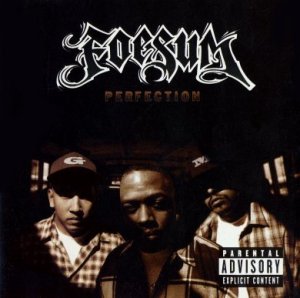 Long Beach outfit Foesum traces their roots back to a DJ crew formed in the mid ’80s while members MNMsta and DJ Glaze were in high school, calling themselves Perfection, a title that would also be selected for Foesum’s debut LP. Bouncing around the vibrant LBC scene with a few different lineups in the years that followed, they became active producers and rappers, maintaining close ties with many of their neighbors who would soon hit the big time. Cutting tracks with Domino, Twinz, and even Snoop Dogg, the original Foesum lineup took shape featuring producer and rapper DJ Glaze and rappers T-Dubb, MNMsta, and Wayniac, who splintered to form Twinz with his brother Trip Locc, signing with Def Jam as Warren G’s understudies after appearing on his “Regulate…G-Funk Era.” Keeping the name as a trio, Foesum negotiated with everyone from Suge Knight to Big Wes, Eazy-E, Warren G, Solar Records, and Big Beat/Atlantic before finally landing at Penalty/Tommy Boy, who released “Perfection” in late 1996.

With vaulted albums dating back to the early ’90s, it’s unfortunate that Foesum never saw a proper release until ’96; given their veteran status, wealth of connections, and the success of so many of their neighbors, it’s easy to imagine that they could have made a splash had they been marketed correctly. “Perfection” is a brilliantly produced record, engineering Long Beach’s beloved g-funk sound to resounding results. DJ Glaze proves a legitimate rival to Warren G’s musical genius, and musically they’re quite similar. Glaze’s go-to element is the keyboard synth, which he programs in softly whining, woozy chord lines that give each track a relaxing, distinctly West Coast feel. His rolling bass, funky percussion, and soulful guitar instrumentation comprise rich, full soundscapes ranging from sunny g-funk to darker gangsta rap. He also shares with the G-Child a real knack for smooth, feel-good sounds, and from top to bottom “Perfection” is consistently an ideally laidback summertime listen, operating at a steady midtempo thump vividly evoking Long Beach’s swaying palm trees and candy-painted lowriders coasting down the strip. Each song is furbished with a well-arranged hook and the quality sound engineering makes the beats perfect for subwoofers and headphones alike.

The LP opens with a bang on “The Ultimate Collaboration,” a posse cut featuring Twinz and Judah Ranks. With a thumping, bass-heavy beat outfitted with a cruising synth line, the track serves as a tag-team showcase. Each rapper’s verse is delivered progressively faster than the last, culminating in MNMsta’s triple-time closer. The tempo slows down for “In the Wind,” a glorious production with a superb hook provided by the Dove Shack’s Bo-Roc, a deep and soulful vocalist employed for multiple g-funk classics. Glaze attains a perfect sonic balance between his lush synths, winding funk guitars, and sturdy drum pattern, providing an ideal backdrop for thoughtful observations on life with and without paper. Bo-Roc returns with another gem of a chorus on “Runnin’ Game,” a moody party track anchored by rigid percussion.

Foesum grows reflective on the slower and particularly soulful tracks found throughout the tracklist. “WhoWouldOfEvaThought?” is a solid rags-to-riches tale, and the smooth “Don’t Get It Twisted” successfully incorporates a Roger Troutman talkbox. The best production is found toward the middle of the album, beginning with the ultra-woozy “Listen to the Sound” and its soaring, ascending synths reminiscent of Kool and the Gang’s “Summer Madness.” On these tracks, the trio raps about little else than kicking back and enjoying themselves, which given the music is quite appropriate:

“Now I’m comin in leanin’, crawlin’ and creepin’
Dippin’ in the ride and I’m hoppin’ when I’m leavin’
Layin’ low, blowin’ smoke out my nose
Got some gin in my lap, and now I’m ready to roll
So I’ma make all you fools recognize me
‘Cause I get more skirts between the sheets than the Isleys
And getting’ loaded is how we kick it
If ya down, come hang with the sly, slick and wicked
Slappin’ bones with the homies
Tossin’ up forties, rollin’ in a fo’ with a skirt bumpin’ oldies
Get my hustle on whenever ends’ one mo’
Dice in my pocket, what they hittin’ fo’?
Hittin’ ventures on the one-time, can’t get caught up
Since that three-strike rule got brought up
Head to the bud spot and pick up an ounce
And dip back to the hood, foo’ and I’m out”

“Now I never knew life would get this hectic
I find myself caught up, more than I expected
But I still take time out to make my rounds
And kick it with the homies to show I’m still down
‘Cause I never forget where I been and what we went through
To go to this point of this game that we’re into
Just ’cause I’m in the spotlight don’t mean I’ve changed
I’m still down to kick it doin’ everyday thangs
Hangin’ with the homies kickin’ back playin’ bones
Rollin’ up a fat sack to keep us in the zone
Fit to get my drink on fool and reminisce
About the good and bad times we seen ever since
So I’m stayin’ true to my crew and myself
Got the homies’ back anytime they need some help
Always lookin’ out for my peeps Glaze and Dubb
And I ain’t trippin’ I’m just showin homey love”

One of the few multiracial crews on the mid-90s West Coast scene (DJ Glaze is Filipino, while MNMsta is of Mexican descent), each MC sports a tough delivery and fairly versatile flow. A generally good-natured trio, Foesum’s rhymes portray them as folks out to have a good time, be it hitting up block parties and barbecues, rolling through their hometown in search of “skirts,” or sitting back for some nostalgic reminiscence. While fairly simple conceptually, their charm lies in the visual style of their verses that strongly evokes scenes and moods, and their focus on friends and fun in light of their troubles is appealing. However, like their associates Warren G, Twinz, and the Dove Shack, they are not blind to struggle and portray a delicate balance between the stereotypically laidback California lifestyle and the rough-and-tumble gangland that is Long Beach after dark. “Just Get On Down (G-Shit)” is a rugged banger, and another late standout is “Who Got Your Back,” an examination of street allegiance over a cold, rough-edged beat from Glaze:

“Now I got somethin’ fo’ that ass if you creepin’ ’em
Steppin’ to the Foe muthafuckas, you ain’t deep enough
Round up your homies, get your gats out
‘Cause I’m comin’ in creepin’ in a drop glass house
‘Cause we be rollin’ deeper than the ocean in ‘Lacs and treys
Got the Coke in the cup so pass me the ENJ
Gettin’ drunk and I’m swervin’, hittin’ side to side
I’m mixed black and Mexican, so you know I’m down to ride
‘Cause the MNMsta packs the Winchester
Dumpin’ on that ass so clear a path when I enter
‘Cause whatever goes down I know my homies behind me
So get your ghetto birds and canines to find me”

The original pressing of “Perfection” went out of print some years after its release, and in 2002 the group reissued a “Limited Edition” version on their own Perfection Label featuring an early track with a young Snoop Dogg titled “Let ‘Em Understand” as a bonus cut, a welcome glimpse into the group and city’s history.

It’s not too hard to discern why Foesum never blew up. Playing with an established sound and marketed as distant relatives on Warren G’s family tree, himself already perceived by many as a tangential Snoop affiliate, their limited target audience had a short shelf life during the g-funk explosion. Still, “Perfection” is a top-notch album musically and engineers the Long Beach sound Warren made infamous to, well, near perfection. Despite a generally low profile, Foesum has amassed a strong and substantial discography of independent releases and continues to tour and record, maintaining a particularly strong following overseas in Japan and Europe. Their debut remains a smooth, relaxing winner and an underrated West Coast gemâ€”maybe not perfection, but pretty darn close.