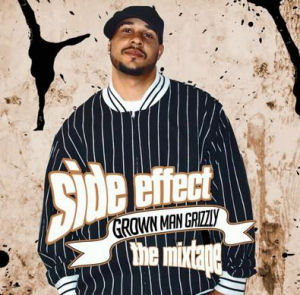 Side Effect is a Philly MC who has been rapping since the nineties, first in II Scandalous, and later as a solo act. As Flash pointed out in his review of his 2006 album “Dirt Hustlin’,” Side Effect has been keeping a low profile. I hadn’t even heard his name until this CD showed up in the mail.

Side Effect has a new CD out on Karma Response Records called “Cabin Fever.” This is not that album. “Grown Man Grizzly” is a mixtape that he released for free two years ago, and that just now found it’s way to my inbox to review. I’m not going to question the delay, but it does explain how old the freestyles are. Half of “Grown Man Grizzly” 26 tracks are freestyles over beats so old they have cobwebs, like the Game’s “Westside Story,” “Life Is Too Short,” and “It’s Hard Out There For A Pimp.”  If the purpose of a freestyle is to prove that you can go hard over a contemporary beat, “Grown Man Grizzly” falls short.

The other half of the beats are handled by underground producers Stress, Cimer Amor, Jason Famous, Happ G, Decypher, and Thee Phantom. The beats are consistently good. Highlights include the jazzy funk of Happ G’s “Audio Ambush” and Jason Famous’s “Microphone Phenomenal;” the dusty, wailing Asian strings on “Loyalty;” the sitar beat on “The Ishn’t;” and album opener “Low Latency.” Some of the best beats on the disc are handled by producer Stress, who gets a nice fat bottom on “Sumertime” and “They Want Effect.” Stress and Side Effect have a collaboration, “The Bangologist,” that’s due out any minute now. If their partnership on this disc is any indication, “The Bangologist” will be an album to cop.

As a rapper, Side Effect has talent, embodying the tough, battle-rapping stance that East Coast rappers have perfected over the past thirty years. When Side Effect hits his groove, he captures the best parts of East Coast underground rap: he’s lyrical, clever, confrontational, braggadocious, and he tears sucker MCs apart over hard beats.

The title of the record “Grown Man Grizzly” is a reference to Side Effect proving himself to the younger generation, showing how he’s been doing this hip hop shit since before all the younger rappers were still shitting their pampers (to steal a line from another older rapper).

Side Effect may prove himself to be more experienced than younger rappers, but he doesn’t seem more mature. He’s got a wicked potty mouth, and drops a manure-heap of scatological and gynecological references. “Mindstate of a primate/Throwing shit in your mom’s face” he raps on “Audio Ambush,” one of many, many references to poo and your mom on this album. There’s a line between sounding hard and becoming a self-parody, and Side Effect crosses it at several points on “Grown Man Grizzly.”

Despite the flaws, Side Effect and his fellow MCs offer some solid underground hip hop. The beats are nice throughout, and when they aren’t focused on body parts or body functions, the rhymes are better than your average rapper. While I wasn’t totally won over by “Grown Man Grizzly,” I will be on the lookout for Side Effect’s upcoming projects.