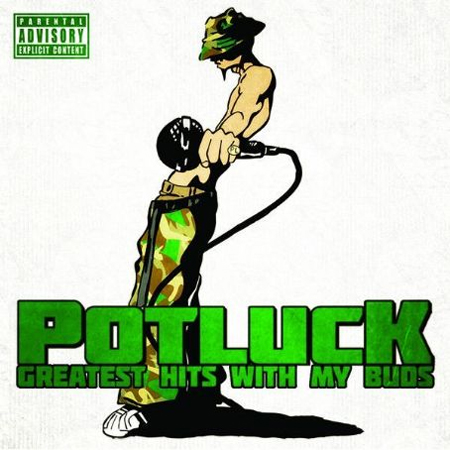 Potluck :: Greatest Hits With My Buds

Rap never ceases to come up with fresh concepts for compilation albums. Similar to MC Breed’s “2 For the Show,” Potluck’s “Greatest Hits With My Buds” gathers collaborations between the main artist and kindred spirits, except that the sources are largely limited to Potluck’s own albums. One could get the impression that the Northern Cali duo doesn’t have much faith in its own abilities if it has to display the co-signment of celebrity guests (the big sticker on the CD’s shrink-wrap announcing featurings from Kottonmouth Kings, Tech N9ne, E-40, Hed PE, Chali 2na, Twiztid, D12 and The Luniz covers up the album artwork entirely). But in the spirit of a smoking session the release makes perfectly sense, since it is, after all, callled “Greatest Hits With My Buds” (if you haven’t noticed the play on words).

UnderRated and 1 Ton have made plenty of musical friends since their Humboldt beginnings ten years ago. Not automatically being part of the rap in-crowd, it’s no surprise they linked up with other fringe elements like Tech N9ne and Kottonmouth Kings. Still it will be hard to find a rap outfit whose resume includes having worked with artists as different as Mystik Journeymen and Twiztid. Naturally, there’s no shortage of songs here that suggest Potluck are particularly estimated for the potent weed they bring to a recording session.

Stoner rap has limited prospects, but if done right it can bubble with puns. Here they are scattered across the tracks, the slowed down, electro-funked up, Pharmacist Chris-produced “Hot Box Anthem” scoring with “I was born to roll just like I was Masta Ace” or “I got a PhD – that’s a Pothead Degree.” Conceptually, the “Gangsta Bitch”-inspired “Stoner Bitch” (f. KMK) is certainly more original than the umpteenth rap version of “Mary Jane,” although the latter is graced by the Luniz (whose “I Got 5 on It” Potluck covered on the Subnoize sampler “Blast From Tha Past”). With “Humboldt County High” you get an early, still local hemp rally, a slender arrangement of high synth tones, while tracks like “Roll Big” (f. KMK) and “4SmokazOnly” (off Hed PE’s “New World Orphans”) feature a bigger, more widely accepted sound. Nevertheless it has to be noted that Potluck’s music never reaches the psychedelic quality of Cypress Hill’s first albums.

Believe it or not, clouded with smoke though their minds may be, Potluck do have other things on said minds. Although a song like “Sports Junkies” (w/ Equipto) doesn’t exactly break the pattern of addiction, and UnderRated can’t help but make another reference to smoking: “In Humboldt where we watch the World Series and smoke SuperBowls.” But there are smoke-free zones alright, like the E-40 feature “You Ain’t That Fine,” laced by Bosko with classic West Coast funk, or the softly thumping dedication “Hip Hop” with contributions from Sunspot Jonz and Luckyiam.PSC. “No Disrespect” sends out a message of unity over reggae grooves, UnderRated and 1 Ton acting as Humboldtian ambassadors of peace:

“I’m livin’ in Humboldt, where we smokin’ the weed and keepin’ it peaceful
We treat you equal, don’t get down with disrespectful people
You tryina scrap? You need to leave, it ain’t the time
Why you need to act so hard? You always fuckin’ up my high
I live on the West Coast, the home of the gangsters, so I know
It’s like a unwritten ritual to get in a fight at every show
But not today, we all gon’ blaze and feel so blessed
No matter the race, the color, or creed, we all gon’ show some respect
Cause it’s a new day, a new age, I’m seein’ us change
I toured the nation with Strange Music and did a song with Brother J
I was the shiest, smallest kid in my class, so I’m just sayin’
If we all just get to know each other we all gon’ see we the same”

Comparing their smoke-filled songs to the early single “What’s Your Purpose,” one might get the idea Potluck have abandoned initial conscious/backpack leanings in favor of the weed gimmick, but with “No Disrespect” or “Revolution” they show they can still pen insightful verses (even though they’re a few notches below Chali 2na’s stunning performance on the latter). Also, the Twitzid features “Smoke the Pain Away” and “Funeral” showcase an introspective side:

“Low on my cash and goin’ nowhere fast
I got just enough to function cause I’m smokin’ on grass
Catch me up in the pad missin’ chances I had
reminiscin’ on the bad, hopin’ I can buy a bag
I’m smokin’ on a blunt, got a problem, roll it up
Mama tell me that I’m special but I keep on fuckin’ up
My lady say she love me but I see she’s had enough
Keep my feelings bottled up and hope she never brings it up
The pain of thinkin’ different would be way too much to handle
Some people live in Disney World, smile in Orlando
My life is filled with mysery, I’m singin’ the soprano
The hurt I feel is real, so I rap over pianos
Pass another joint, so I can puff away the pain
It’s way too late to change the thoughts that’s runnin’ through my brain
Ain’t no solvin’ my problems, only arguin’ through it
So I smoke a blunt of chronic ‘stead of swallowin’ bullets”

When the smoke clears it is evident that Potluck are jacks of many trades. At times coming across like a NorCal version of Dilated Peoples but also well versed in Bone Thugs harmonizing, the duo adapt to a variety of sounds and styles, UnderRated’s production, largely sample-free, matching the diversity. Next to one disc already filled to capacity, “Greatest Hits With My Buds” includes a second CD, the previously only digitally available “Pothead Music Vol. 1” by The Dank Alumni Experience, Potluck’s collaboration project with Absolute on End and Garth-Culti-Vader, another 30 minutes of expertedly executed escapism, taken by itself the more compelling record, but since you get both with this double-disc release, chances are, every rap fan will find something to like on “Greatest Hits With My Buds.” High praise indeed.