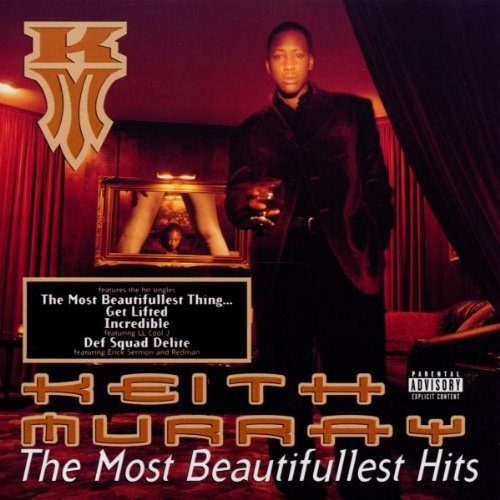 Keith Murray :: The Most Beautifullest Hits

Their glory years well behind them, it looks as if Keith Murray’s legacy may be the least of the Def Squad, odd in that he was often the most captivating member on group efforts. Lacking Redman’s legendary discography and the pioneer’s resume of Erick Sermon, Keith amassed a significant catalog of acclaimed singles and albums alike, collaborating with some of the East Coast’s finest MCs and becoming well known for his recognizably rugged flow and potent battle rhymes. 1999’s “The Most Beautifullest Hits” makes a great case for why history shouldn’t write him off as E and Reggie’s tagalong.

Keith first started showing up after EPMD’s 1992 breakup with cameos on Sermon’s 1993 solo debut “No Pressure”â€”the trunk-rattling “Hostile” from that album, featuring a head-turning guest verse, appears as the first track on this collection. His 1994 debut “The Most Beautifullest Thing In This World” was produced almost entirely by E-Double and established an instant fan base that remained for his subsequent Jive efforts, 1996’s “Enigma” and 1999’s “It’s a Beautiful Thing.” Coming home from jail in 2003, he signed with Def Jam for “He’s Keith Murray” and stayed out of the spotlight until 2007’s “Rap-Murr-Phobia: Fear of Real Hip Hop” and 2008’s “Intellectual Violence.” Released by Jive, “The Most Beautifullest Hits” contains material from his first three albums, so from an album standpoint only encompasses half of his career to date, but also includes his most infamous guest appearances and tracks from the Def Squad’s first group outing.

Released in 1999 during his incarceration and mere months after his third LP, the cover art on “The Most Beautifullest Hits” appears to come from the “It’s a Beautiful Thing” photo shoot, one of the most laughably misleading cover jobs I’ve seen. Picturing Keith in a suave bachelor pad clad in a velvet suit and holding a glass of wine, it looks as if the designers confused Keith Murray for Keith Sweat. A raw New York rhymer from the age of raw New York rhymers, Keith’s appeal was built around his tireless energy and cerebral battle raps, with an inimitable delivery, motormouth flow, and vicious punchlines; as Masta Ace once quipped, a man who “fucked niggas up and asked questions later.” Backed by the Green Eyed Bandit’s cosmic funk, his early output was the union of a venomous MC and a masterful producer, as evidenced by his brilliant debut single “The Most Beautifullest Thing In This World,” with a smooth, ingenious track from Sermon and Murray’s witty, head-spinning raps that established his character as one to be reckoned with:

“Y’all mythological niggas is comical
The astronomical is comin’ through like the flu, bombin’ you
And embalmin’ in your crew too
With the musical-mystical-magical, you know how I do
With word attack skills and vocabulary too
Droppin’ hits, and this Edition is all brand New
You’re through, I’m interplanetarian like Doctor Who, so who
Born to get tripped on, word is bond
I’m kickin’ rhymes ’til the AM vultures swarm
Not Quincy but I’m back on the block and not sellin’ crack
I’m comin’ in with the fat funk flows and tracks
So what you sayin’ black, with all that yackety yack
My artifacts can’t be beat with bats
I’m sayin’, I eat up everything up on the menu
And bend you and send you swayin’, to be continued”

The thumping weed ode “Get Lifted,” “How’s That,” and “Danger” are also included from the debut, each showcasing his distinctive delivery and heady lyricism. “Enigma” is represented by the underrated single “The Rhyme” and the Ummah production “Dangerous Ground,” and three tracks come from “It’s a Beautiful Thing”: the menacing “When I Rap”; the snaky “Ride Wit Us” featuring Sermon, Redman, and Too Short which also appeared on Def Squad’s 1998 effort “El Nino”; and the polished LL Cool J duet “Incredible.”

The other tracks here are well-selected and might even entice fans who already own his first three LPs. “Cosmic Slop” from Redman’s “Dare Iz a Darkside” stands up with any of Keith’s own singles, and in addition to “Ride Wit Us,” “El Nino” supplies “Full Cooperation” and a lively cover of Sugarhill Gang’s “Rapper’s Delite.” Most exciting is an extended version of the thundering East Coast posse cut “I Shot Ya (Remix),” a classic from LL Cool J’s 1995 album “Mr. Smith” featuring the all-star lineup of Murray, LL, Prodigy, Fat Joe, and Foxy Brown. Over a beast of a Trackmasters production, Murray kills his opening verse:

“I’m here to make a dollar out of fifteen cents
And let my balls hang like I’m on the toilet takin’ a shit
My style is all that, and a big bag of chips with the dip
Fuck all that sensuous shit
I represent intellectual violence
And leave your click holier than the Ten Commandments
Like Redman I shift with the ruck
If ya if was a spliff we’d be all fucked up
No need to ask you who is he, son, I get busy
Scuff my Tims on the boulevard of many rough cities
I’ll have to Norman Bates ya, I love to hate ya
‘Cause you’s a freak by nature
Can’t wait to face ya, mutilate ya
Drink your style down straight with no chaser
My verbal combat’s like a mini mack to your back
As soon as one of you niggas try to overreact
The L.O.D. love good confrontation or vamp
Break your concentration, murder your camp
For the jealous, overzealous, we fellas
Blow the spot like Branford Marsalis
Niggas comin’ through and actin’ wild
Y’all commercial niggas better have a Coke and a smile
I shot ya”

It’s quite plausible that Murray never intended for a greatest hits album to be released a mere five years into his recording career, and it may well have been a quick way for Jive to cash in on a departed and incarcerated artist. While “The Most Beautifullest Hits” is not an accurate portrayal of Murray’s work as it only encompasses the first years of a young career, it succeeds brilliantly for what it is: a great collection of a great rapper’s great music.