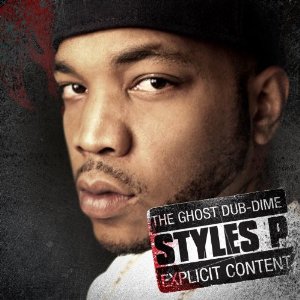 For over a decade, we’ve all come to know Styles P by a multitude of names: Paniro, S.P., The Ghost, Holiday Styles and so forth. Back in June we were introduced to David Styles the author as S.P. released a novel entitled “Invincible.” In addition to the book, there was also a soundtrack of the same name. Prior to its release, Styles dropped “The Ghost Dub-Dime Mixtape,” which was the follow up to “The Green Ghost Project.” When asked why he decided to make a second unofficial album instead of proper follow up to 2007’s “Super Gangster Extraordinary Gentleman,” Styles explained that he wasn’t in a “worldwide” mood and just wanted to keep it street. In fact, in the mixtape’s opening moments, he appoints himself as the representative of the poor and the voiceless. Production is provided by the likes of Street Radio, Ceasar Productions and Don Joe. While these aren’t necessarily household names, their beats pack enough punch (pun intended) for S.P. to flow over and inflict damage.

Following the intro, things get going with “G-Sense” and “Back On My New Shit.” The former hits a bit harder production-wise, but if there was any doubt to the claim that this mixtape is for the streets, then the latter clears that up, as Styles raps:

“Go ahead and fuck with me, I’m really gettin’ the Desert
Already know you’re food, go ahead and give me your beverage
Might be kinda short but I bet you I get the leverage
Hit yo ass up, and I bet you ya gon hemorrhage
Go ahead and make a tease, I bet you he gon perish
If I don’t shoot him up, then I throw him off the terrace
Really wanna urine on him
But he’s too far down, so I put it in a cup and pour it on him”

As the mixtape moves forward, Styles continues to kick the tales of the trials and tribulations of inner-city life. Never afraid to present more than one side of the situation, songs like “Where I’m From” perfectly illustrate the conditions that could force someone to turn to the streets, while other songs like “Fast Lane” are quick to point out the possibility for failure: “Life is like chess, but never forget the checkers/ Try to jump, get the pump or get hit with the trifecta/ That’s the trey-pound or the trey-eight/ Even Furious Styles couldn’t keep Tre safe.” The first single that was released, “That Street Life”, features the soulful sound of Raleigh, NC-based singer and producer Tyler Woods, giving balance to the street conscious raps of The Ghost:

“I don’t need no pen, I don’t need no pad
Yeah I miss my brother, yeah I miss my dad
Wanna kill the whole world sometimes I get so mad
Tell myself to slow down, don’t get so fast
To light a big ass blunt, and let the shit go past
But the pain’s still there, so the shit don’t last
Yeah I sit in the dark, I’m addicted to weed
Stopped buying fast cars, because I’m addicted to speed
I don’t know what to do, I don’t know where to go
I don’t fit up in this industry, but know I can flow
Why I’m standin’ in the ghetto when I know I can blow
Why I’m standin’ on the corner when I know I should go”

On the first listen, the spaced-out production of “Juice Bar” makes it seem a bit out of place, but the lyrical content is just as street as any of the other tracks on the mixtape. Things start to wind down with the medieval-sounding “Road To Success” but not before Styles declares “Here I Am.” When it comes to raw, grimey, gutter lyrics, Paniro is happy and quick to oblige with lines like “Shoot the white zinfandel out ya bitch mouth while she’s sippin’ it/ D-B-Lock.” One complaint that may come up about this mixtape is the fact that it’s only 35 minutes long, but that’s long enough for Styles to get his point across. For those who want more S.P. in addition to this mixtape, check out the companion soundtrack to “Invincible.” I can’t recommend one over the other since I haven’t listened to the soundtrack, but I do know the only track from this mixtape that appears on the soundtrack is “This Street Life.” For all others who happen to appreciate the uncompromising vivid street imagery that Styles P is known for, this mixtape should be satisfying enough. Although brief, “Ghost Dub-Dime” has enough going for it here to garner it’s fair amount of play, in the streets or otherwise.