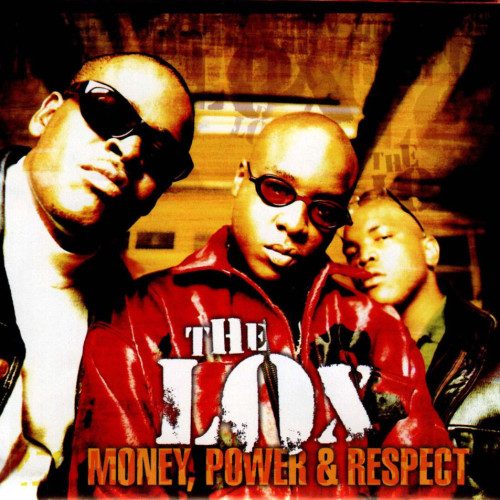 “It was around 1997, The LOX was the sound of the streets. It felt like there was a Bad Boy on every corner back then.” Nostalgia comes included with “Money, Power & Respect,” whose intro “Yonkers Tale” (mimicking the opening sequence of ‘A Bronx Tale’) already sets a historic stage for a rap album that was then brand new. To be precise, there weren’t that many Bad Boys around back then (even if you count Martin Lawrence and Will Smith tag-teaming in ‘Bad Boys’), but Bad Boy Entertainment had certainly become an ubiquitous player in the recording industry, and with The LOX, Sean ‘Puffy’ Combs was able to present three more Bad Boys in one fell swoop.

Christopher Wallace died in March 1997. His posthumous album “Life After Death” was quickly followed by Puff Daddy & The Family’s “No Way Out,” Mase’s “Harlem World,” and then in early ’98 by “Money, Power & Respect.” By the time of their full-length debut, The LOX were already a household name in hip-hop, having appeared on the previously mentioned albums (most notably in Big’s “Last Days” and Puff’s “It’s All About the Benjamins”), as well as providing the mandatory rap edge to R&B songs by Mona Lisa, Mariah Carey, LSG, ZhanÃ©, and Mary J. Blige.

The LOX entered their mainstream career well prepared, garnering a gold album and a gold single within months (the album went platinum in ’99). Combs was instrumental in that success, from considering the endorsement by fellow Yonkers artist Mary J. Blige, to shortening the somewhat nerdy name The Warlocks to The LOX (which came to stand for Living Off Xperience), to providing the label’s production expertise. As Mase and Puff himself covered Bad Boy’s pop rap leanings, The LOX, while visually fresh-faced and vocally exuding a touch of innocence, were seen as the label’s future lyrical strike force. The question was not only which direction the rap department of Bad Boy would take, but also if The LOX, similar to The Notorious BIG, could combine commercial and artistic ambitions.

The first single, “If You Think I’m Jiggy” failed at both. Those wondering if the title referenced Rod Stewart’s “Do Ya Think I’m Sexy” learned from the credits that the composition indeed embodied portions thereof, even if the only traces of it could be found in the half-sung hook. Apparently Bad Boy was able to afford such preemptive ‘sample’ clearance. Produced by Dame Grease with untypical restraint, “If You Think I’m Jiggy” is one of the most uneventful club tracks of the Bad Boy era, the spacious instrumentation suggesting luxury but creating an air of of emptiness. This reviewer at least can’t help but be reminded of the scene in the “What They Do” ‘Rap Video Manual’ parody when Black Thought boredly waves his champagne glass. Still, on their ’97 single The LOX radiated the defiant big baller charm that has since proven so attractive to many rap listeners.

The strategy, however, was too transparent. Have The LOX build on their recently found fame (Sheek mentions “the Mona video” and “Benjamins”) and endear them to the female audience. The LOX were both object of and spokesmen for the Puff Daddy entrepreneurial philosophy, repeating his “Can’t stop, won’t stop” mantra. They were Puff’s willing apprentices as he lured them, “I’ma show you how you get this money.” “Get This $” was an unfamiliar environment for the always efficient Lou Donaldson sample, yet the trio flowed expertedly to it. However, the song was more Mase than anything else, as evidenced by this Jada excerpt:

“Who you know could take an old record and flip like Puff?
From small clubs to arenas, who rip like us?
Who everytime they pull up, whips be plush
chicks be tough, Bad Boy – Hits R Us
I bagged this mean West Indies slimmy named Kimmy
and I taught her how to say ‘May I have?’ instead of ‘Gimme!'”

It’s all or nothing in “Livin’ the Life,” whose extended hook still only offers up two options – to “rise or fall,” “be large or small”, “die or ball,” “be rich or poor.” Rather than indulging in traditional grimy, gully, true-to-street-life rap, the LOX remain academic and get caught up in the mafia fantasies of their days, Styles boasting that “everything involve The LOX,” Sheek bragging, “even my guns be Ger-man, links Cu-ban, rugs Per-sian,” and Kiss calling his crew “black mob / with every last member of the team on the job / whether it be controllin’ the street holdin’ the heat / really don’t matter to me, long as we eat.” The album also attempts a couple of “Life After Death”-style narratives. “The Heist (Part 1)” passes without leaving a lasting impression, but “Bitches From Eastwick” does better justice to Big with good storytelling.

Overall the trio manages to establish the LOX brand name but struggles to create individual profiles, even though they all have solo cuts. Sheek channels MC Lyte in “Goin’ Be Some Shit,” which taunts “industry niggas” “with that Wendy Williams shit,” and – ironically – rappers who don’t write their own rhymes. Sheek has often been singled out as the weakest link in The LOX, but his animated performance on “Money, Power & Respect” is a welcome contrast to the nonchalant flows of Styles and Jadakiss, who at times sound very similar. Lyrically he has a few nuggets as well. Just ponder his contribution to “Bitches From Eastwick,” where the scammer leaves him waking up to breakfast and a note apologizing for the inconvenience: “Sorry I had to rob you baby, but / I need cash like you, I ain’t your ordinary slut / or dick teaser, please, I need food in my freezer / and by the time you read this note I done been spent your Visa.”

The other two give hints of what they’re capable of, Styles with his more poetic approach, Jay with his punchline methodology. The Styles solo “Not to Be Fucked With” is the album’s unlikeliest track, as it finds Pinero lost in his thoughts over a surprisingly subdued Dame Grease/Puff Daddy co-production, envisioning “jeeps that fly when traffic’s packed / bustin’ down on the crabs with plasma gats (…) Sagittarius style, spittin’ out arrows / hundred at a time, killin’ a hundred heroes.” “All for the Love” on the other hand is underwhelming at best, and certainly not the type of track Kiss built his reputation on. It works neither as a convincing drug dealer confession nor as a lyrical manifesto, even its best line – “You hear that flow? It drove the underground wacko / every since 12 I been spittin’ like tabacco” – sounding like an empty promise.

“Let’s Start Rap Over,” the regretful ode to rap’s innocent days, is the only time they get autobiographical, intertwined with choice rap references. Styles:

“When I was nine years old I realized there was a road
at the end I would win lots of pots of gold
Days when I used to have my play clothes on
I would make up my rhymes [in] the middle of Voltron
But you learned what the Earth do, breakin’ curfew
Hit the park when it’s dark, make a stand like a podium
Niggas had a box and a strip of linoleum
Some break or boogie but those that don’t…
Was usually a fighter, rollin’ E-Z Widers
sendin’ people to the store for a soda and a lighter
A real cool cat that would let you keep a dollar
But now things change and it’s the days of tomorrow
The little kids is big now, they’ll push your wig now
Can’t send ’em to the store but you can send ’em for raw
So I speak my mind and put ’em on my vine
and give ’em one big push for all mankind”

The legacy of “Money, Power & Respect” lies foremost in the solo careers of its three rappers that it spawned. But there is also the album’s title track. The group’s contribution to its success may be secondary as the real star here is the beat by Deric ‘D-Dot’ Angelettie, Ron ‘Amen-Ra’ Lawrence and Jay Garfield, in conjunction with Lil’ Kim delivering what has to be a hook penned by Biggie himself. To this day “Money, Power & Respect” sends shivers down the spine of this rap fan when the well-timed drums court the dramatic string loop while Kim, after a short, whipping, Tony Montana-inspired intro, gives the brilliantly concise declaration:

“I’m done with ice in charms
I’m tryin’ to ice my whole casket when I’m gone
Pull up with class on the Don
Once I meet Him I greet Him, kiss His feet for freedom
tell Him, ‘Thank you Lord
cause on Earth I was gettin’ bored
Now resurrect me back to this cat called Sheek
So I can make this album and get back to cats that’s weak’
Two thirty, six two
Me budge for you that’s like a cat verse a pitbull
Gun, no clip full; keep hunger and plan for the future
Cause you figure you gon’ be older
way longer than you gon’ be younger”

You’d expect a trio to raise more hell than The LOX do on this surprisingly pensive debut. One of the reasons for that was certainly the tragic loss of their mentor. Their tribute to BIG, the previously released “We’ll Always Love Big Poppa,” closes the album on an emotional note. “Everybody Wanna Rat” should be one of the earliest songs about snitching on a mainstream rap album, and while the P.K./Dame Grease beat has a cheap, forcedly cinematic feel to it, it does feature a show-stealing Jadakiss verse. The Nashiem Myrick-produced “I Wanna Thank You” finds Kelly Price and Puff in a spiritual mood, and over the conciliating beat The LOX open up as well. Kiss reflects, “Brains is the key to the game / if you ain’t got none, what good is a shotgun? / If you ain’t got guns, then you better cop some / cause the New World Order’s around the block, dunn.” Styles laments, “It’s all foul / Watch the honeys check your style / Worthless when they worship what you purchase / They only see ice, not me under the surface / What’s the purpose? I just go my way / Know my way, till bullets blow my way.” And Sheek actually ends up putting respect over money:

“If I wasn’t that cat Sheek Luchian’ that rap
would you still be my man and pass your bottle to my hand?
Would I be in the rain while you pass me in the Land’?
Oh, you think by now that I don’t already know your plan
to get next to me and possibly sex me
then slip ecstasy inside a nigga’s Pepsi
Money’ll never amount to respect, B
And you don’t wanna test me
cause God blessed me”

As so often, less would have been more for the LOX debut. Considering that “Money, Power & Respect” fared much better than “If You Think I’m Jiggy,” the ordained Bad Boy material like “So Right” and “Can’t Stop, Won’t Stop” seems even more pointless. But if you listen close enough, you come to the realization that even the streamlined LOX deviate ever so often from what you expect to be spewed out by a hit factory, surpassing any bland “half rough, half jiggy” formula. That’s why the fact that this album rose as high as #3 in the Billboard 200 isn’t proof of buyer’s ignorance but a sign that Bad Boy, at least for a while, still somehow managed to reasonably handle the artistic estate of The Notorious one.