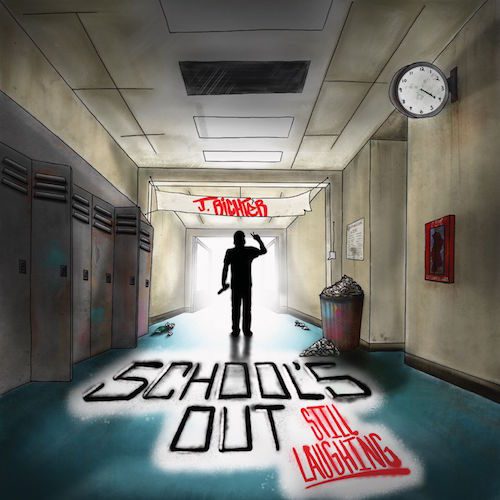 It’s kind of hard for me to fathom a Kottonmouth Kings without Johnny Richter, but the two sides parted ways in 2013 when the Kings left Suburban Noize Records and Richter stayed behind signed as a soloist. I’m not sure there’s any animosity and I’m certainly not trying to paint the picture that there is. There’s nothing on “School’s Out (Still Laughing)” I can point to as a diss track. He’s not the only person to leave the group over the years – DJ Bobby B and Saint Dog also parted ways at various points – so it’s more than likely a change in philosophy for everybody involved about artistic and creative direction. Richter certainly sounds like he’s getting philosophical and thoughtful on “Insanely Amazing,” an opener where he reminisces over dead homies in the first verse then gets deeper on the second section:

“I can’t believe what people say to those they’ve never met
There’s so much negativity spread on the internet
I think you should be held responsible for what you said
I bet that most would think twice before they hit send
Now more than ever you can’t believe anything you read
And as for me I only believe half of what you see
Because your mind can play tricks or simply be deceived
And what you’re looking at ain’t really what your brain thinks
And who came up with fake reality shows?
The plots are all the same – just give ’em boobs and let the cameras roll
Just look at how it’s affecting the young society
All you gotta do to be famous is lack sobriety”

It’s a good look for Richter, but try as I might listening to “School’s Out” I can’t help but notice that unlike his last full-length solo there are no cameos by Daddy X or Dirtball. Even if there’s not open animosity between Richter and the group, there’s not any collaboration either now that the remainder of the Kings are on United Family Music. Richter didn’t even seem sure he wanted to keep rapping once they parted sides. As he says in the outro of “Kill It” he had to “take a little break (to) get that fire back (and) remember why I do this music.” I’m not sure if that fire included making the tracks too as the “one sheet” isn’t clear — it says the album was recorded in San Diego and “mastered in the marijuana mecca of Humboldt, CA by Underrated from Potluck.” One other reference I can find online says Underrated was the producer though and since Potluck has a guest appearance on “Burb Words” I’ll go with it.

The point I’m trying to get across is that the instrumentals are of variable dopeness from track to track. Some are definitely “fire” – the electronic melody and hard hitting bass of “Way Out,” a “Mad Cow” track that seems destined for a remix with Madchild, and the spooky minimalistic sound of “Reflections.” On the other hand some tracks seem to have a good start and then just never progress to anything musically intriguing. “Moving Forward” is an ironically titled example of the problem. “Conflict” implies tension but doesn’t do anything to make you feel stress or quicken your pulse. “High On Life” references the long running theme of intoxicants Kottonmouth Kings fans know and love but then flips it over to romance and says he “don’t even need no pills or alcohol or nothing/cause I’m high on life and drunk on lots of loving.” Really? Still he’s gonna “Keep On Keeping On” whether it’s a great track or just so-so and average.

What I respect the most about “School’s Out” is that Richter is clearly trying to work his way through some personal problems and complex emotions, as he keeps referencing death and loss throughout the CD, so if you wanted a strictly fun times “high all day, f#%k all night” type Kings album let alone Richter solo then this might not be for you. Even a lifelong stoner like J.R. can see there’s more to life than the party, and while you can overdo sobriety just as much as you can intoxication, I respect Richter taking a chance and hoping his past fans will come with him on this journey. I expect most will.