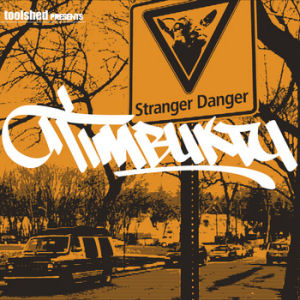 The only appropriate way I can think of to start this review is to explain the significance of the artist’s name. I never like to assume any readers haven’t studied the history of great African nations, cities and empires yet it’s possible some who only recently started high school or college have yet to hit the chapter on Timbuktu in their studies. To be fair though a chapter simply isn’t enough for this fabled city, and neither is this paragraph, so I encourage you to read further after this review and learn more. Nevertheless here’s a VERY brief summary. Geographically the city lies within the land locked nation of Mali. Historically Timbuktu has been known for learning and scholarship, renowned for both secular learning and Islamic teaching, and since at least the 15th century had a large madrasah/university – now considered to be among the world’s oldest. A thriving trade business made it at times a very wealthy city, which in turn made it a target for invasions and conquests, passing through several large and powerful empires over time. The current day city is more modest but is recognized by UNESCO as a World Heritage Site that people of all nations should appreciate and preserve.

Now then we turn to the ARTIST Timbuktu – a scruffy looking white dude from the city of London, Ontario, Canada. Huh? Don’t blame me. Although it does seem odd initially, given Timbuktu’s rich history as a center of knowledge, it can in fact be seen as a simple acknowledgement that Knowledge Reigns Supreme. I can dig and respect that. Timbuktu is certainly aligned with the right crew by virtue of D-Sisive among others (who coincidentally makes a cameo appearance on two different tracks). Kils doesn’t do every single track out of 15 but it’s fair to say he handles a majority, with Tim himself doing a few and contributions from Beatmason, Bigg Bix, Uncle Fester and The Returners among others. Even the songs he didn’t produce or co-produce were mixed and arranged by Kils, so he’s always there.

Food seems to be a recurring theme for Tim intentionally or otherwise. One of his hardest hitting songs musically and lyrically is “Grown Man’s Dinner,” a boom bap rap where he vows he’s “sippin’ Tropicana with the Presidential candidates” even though he’s “broke and lampin’ with degenerates.” With additional scratching by DJiRATE of the phrase “macaroni and cheese” this is a song designed to please AND make you hungry. As noted though food is a recurring theme which you can also find over the gaunt “Fishcakes,” soaking into the blunts and brew of “Memory Stew” and arguably even a flavor factor in “Nothin Sweet” with El Da Sensei. The song packs a dense amount into under three minutes, particularly given the first 25 seconds are taken up by instrumental and dialogue snippets.

Tim: “Heard it through the grapevine you’re a dime a dozen
Survival of the fittest, smell the primal bust
Just the incredible, predator any edible
animal I meet gets greeted with the mandibles
Savage not sweet, creep through canapes
Squash a non-believer and got you panicky”

El: “Excel when launched, raised to levels unimagined
Fathom my extractions, protected by my pattern
Sharp like stabbings, always make it happen
Like jump offs in satins, two tits I’m grabbin
First deal burned tags, then emcees the same
Known to spit flames that lasted in the game”

Although this review has named several standout tracks already, quality tends to be the rule rather than the exception on “Stranger Danger.” The speedy flows spit on “Timbuk the Brave” over a self-produced Timbuk beat are worthy of any Gift of Gab flow, showing off what his press release vows is over 13 years of hip-hop experience. That experience also manifests on the old school throwback sound of “The New Science” and the massive posse-all-in manifesto “Smell the Glove” with everyone from Muneshine to Wordburglar joining in on the fun. If there’s a major downside to “Stranger Danger” the biggest one that occurs to me is that the CD is censored for foul language and words not normally heard on MTV – and a few that are including “tits” in El Da Sensei’s verse posted above. Despite that Timbuktu’s “Stranger Danger” is a lot of fun, though I’m not quite getting the scholarly vibe I expected based on his name. He’s more of a punchline humorist and underground rap architect than an intellectual, but he does what he does do well so I’m not hating on it. If he’s had it for 13 years, by all means keep it, but the city in Mali has had it for at least 900+ more.