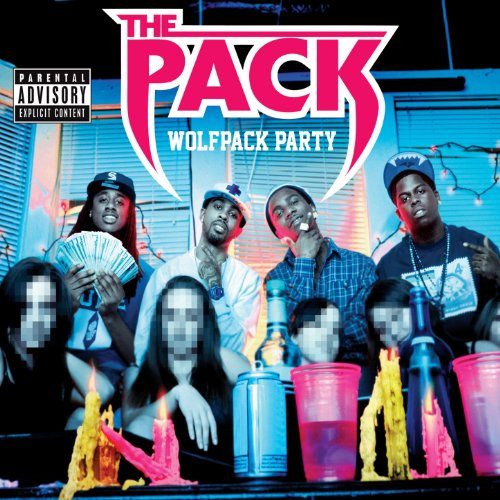 It’s no coincidence that there is more censored than there is visible on the cover of The Pack’s new album. The faces of the young women partying with these wolves are digitally blurred out. Some phallic looking objects on the table in front are blocked out by neon colored melting candles (one might be a bong). A beer is strategically placed in front of a bottle of top shelf liquor so you can’t see the label, and even the beer can itself has been digitally altered so that it has a generic label that reads BEER. I’m not sure anyone has ever gone to the store to buy BEER brand beer, but if you’re the first then write back to me and say so. The bottom line is that this is all one huge in joke that may be over the heads of newcomers. Long time Pack fans will remember that MTV all but banned the video for “Vans” for being what they felt was a three minute commercial for footwear they weren’t getting paid for. The censored version that finally came out was so bad it was good, causing a groundswell of support for The Pack and making their debut EP “Skateboards 2 Scrapers” a hit.

Four years and dozens of songs later, The Pack are back with what may be their biggest album to date – the 19 song and over one hour long “Wolfpack Party.” They’re leaving little doubt where they stand musically or lyrically on the opener “Bass Remix III.” The hits are designed to rattle your trunk or shake the walls of the club, and the rap is intentionally crass, with Pack members spitting lines like “ball so hard that every bitch is a rebound” and “yeah nigga, I’m the shit like a dump.” For the uninitiated, this is what The Pack has been about since their start. Young L, Lil Uno, Lil B, and Stunna never proclaimed themselves as hip-hop’s intellectual lyrical saviors – far from it. In fact the topic matter of most of their songs fits squarely into the Lil Jon mold – drink a lot, dance a lot, fuck a lot, and brag about it a lot. Haters have accused them of dumbing down hip-hop music, while failing to realize hip-hop’s roots go back to DJ’s spinning at block parties and underground clubs where (guess what) people danced, drank, fucked and smoked a whole lot. Whether you like or hate it The Pack represent a form of pure hip-hop expression untainted by any pretentious or lofty ideals.

Giving them their due as uncompromising party rappers is one thing, but listening to 19 straight songs of it is another. Young L produces the majority of the songs here, which is both a gift and a curse for “Wolfpack Party.” He’s certainly not incompetent when it comes to layering bass, drums, melody and lyrics together, but sooner or later you realize that if you’ve heard one Young L produced song you’ve heard them all. The tempo, the thwomp of the beat, the electronic melodies and noises, they all blend together over time. When one song off the album is packaged and sold as a single such as “Sex on the Beach” it stands out from most of today’s hip-hop (save for the New Boyz, who have accused them of ripping off their style and vice versa). On the album there are a dozen tracks just like it though. “Make Me Cum” and “Front Back” are interchangeable, and the only reason “Titties” and “Aye!” won’t be single material in the same mold are that they’d probably be too hard to clean up for radio. Out of numerous amount of songs on this CD, “Super Man” and the the Lil Wayne/Drake croon inspired title track would be the best choices despite the line “she on my balls/give that bitch a Heisman.” Usually a Heisman trophy has one (foot)ball not two, but whatev’.

So here’s the bottom line on “Wolfpack Party” – the album lives up to the title. This is four young, wild, and crazy guys with hella money to spend living it up in California or anywhere that the road takes them. Sophisticated? No. Profound? No. Unapologetic? Yes. And for that you have to give them their respect and take “Wolfpack Party” at face value for what it is – party music. The only thing that really hurts The Pack here is that 19 songs of it is just too much in one sitting, as it ultimately makes you realize how little they have to say and how repetitive they can be. If you can focus more on the beats and not so much on the words the overall experience improves, but even then it still tends to be monotonous. Still if you’re going to throw a late night bash where your apartment or dorm room ends up looking like the cover of this CD, this is probably the perfect album to play.