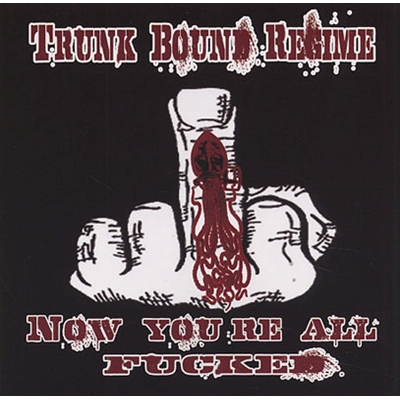 Trunkbound Regime is a two man crew of Just Be and Mike Cooley broadcasting straight out of Dayton, Ohio. After a chance meeting in 2008, the two emcees decided to pursue their musical aspirations together. “Now You’re All Fucked” is the result of their grind; an 8 track EP that runs the gamut of both style and quality. The duo is hard to describe upon first impression. Their artwork consists of a big middle finger on the front with a squid tattoo. The back shows a set of murders in the moonlight set to a gothic backdrop. The music is far from the horrorcore or hardcore rap music one would expect.

“Gettin Mine” is set to a soulful croon that quickly flips into an energetic loop. Mike Cooley drops a verse about keeping it real in the rap game and Just Be follows in kind. The track is a perfect mix of confidence and energy and works well for the duo. “Traffic” changes the pace with a Young Jeezy sampled hook slathered over a hypnotic southern bounce beat. The duo takes the song in an unexpected direction by lamenting on the changes they’ve seen in their city. The tie in comes when Just Be frames his verse as reflections he’s had while stuck in traffic. The juxtaposition is interesting, even if it is not a complete success. “Lead The Way” marks the first misstep as the duo enlists the vocal help of a singer who tries to sing out of her vocal range with poor results. The subpar singing ruins the song. “No Second Guessing (Regime Mix)” picks things up again with Mike Cooley reflecting on his thoughts about hip-hop:

“Let me give it to you straight, no chase, bitch
Hip-hop didn’t die with Rap City’s basement
It’s very much alive and it’s hitting impatient
Try to come between us there’s going be some complications
Now I realize that you wish it could be different
And blame rap music every time that I act ignorant
Like when we’re in the Buick bumping Marley and you ask me “Is this love?”
I just have to switch it up and put some Too $hort in the trunk
Always was too short to dunk and too slow to run on the track
Baseball’s my favorite sport but I wasn’t even good at that
Wanted to DJ until I heard Sparechange
And figured that that motherfucker was going to own the whole game
No rhythm for breaking and my graf was always weak
Only choice was to develop one hell of a mouthpiece
Everyone I know second guessed my decision
Dropped the mixtape with Be and now they love how I’m spitting”

Combined with a catchy hook and jazzy g-funk on the beat, the song is a smooth success. “Our People” changes pace yet again with distorted guitars bouncing over a stuttering drum beat. Just Be once again leans towards the left by delivering a social message. The hook is a complete breakdown featuring eery, airy vocals with no music. “Whatcha Call That” finds the duo using Young Jeezy as their muse yet again, this time pairing his vocals with long, dull guitar stabs and a frantic synth/sample combination. “Gravity” unfortunately marks the return of the same vocalist from “Lead The Way.” Even forgiving the fact that R&B is not the group’s forte, the singer’s limited range make this song skippable. TBR ends things on a lighter note with “Enjoy The Ride.” Spare Change produces a laid back, feel good beat and the singer is limited to the hook.

“Now You’re All Fucked” is a mixed bag of songs. Trunk Bound Regime shows promise and ambition throughout. Though their more adventurous songs fail to connect at times, the fact they even attempt such tracks shows more creativity than most groups. The production on majority of the EP is head nodding. Mike Cooley stands out as the natural emcee in the group, commanding the mic with a comfortable flow. Just Be is the socially conscious emcee in the group and makes up for his shortcomings with clear passion for the art. “Now You’re All Fucked” is a bit too scattershot to give it a universal nod, but, overall, TBR shows plenty of promise.