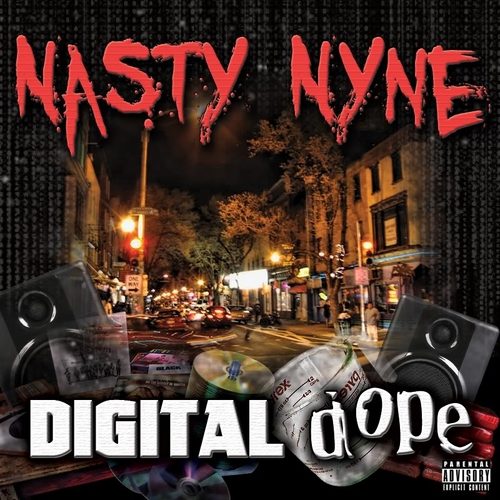 Michigan is usually known for horrorcore or gangsta rap, but Nasty Nyne is looking to add a new dimension to Michigan hip-hop. “Digital Dope” is 14 tracks of rough and rugged raps with east coast flair. While the style isn’t new, it is a style you don’t often associate with Michigan. Further differentiating Nasty Nyne from the pack is the fact he represents Lansing, Michigan, a town that to my knowledge hasn’t produced a major rap star. With “Digital Dope,” Nasty Nyne is out to prove a small city boy with a big city swag is enough “dopeness” to attract the fiends.

The first thing one notices on “Digital Dope” is the complete lack of originality in the beats. I give credit to Nyne for not copping out by dropping a “mixtape” full of original beats, but he does use other beats enough for it to be an issue. The original beats on the album either use classic samples or are very generic. The intro finds Nyne rapping a one minute verse over the beat to Camp Lo’s “Lucini.” “Out The Box” features a re-working of Ghostface Killah’s “Apollo Kids.” The sample is flipped differently with more aggression and energy, but you still can’t help but think of GFK when listening. Nyne reverts back to mixtape tracks towards the end, rapping over the “Who Shot Ya” instrumental, among others. The original production is mostly darker, synth driven with a southern influence. The pounding beat and two note melody on “Dope Superbowl” doesn’t sound bad, but there is nothing unique or creative about the sound.

Lyrically, Nasty Nyne does his best to rise above the production. He gets things started on a promising tip with “Out The Box:”

“The genius raw writer, pull an all-nighter
Excite the wire like the booth on fire
He know how to wreck a crowd
Double deck techs, have em writing now
Hey child, I’m second to none
Make your whole block run like I’m flashing a gun
You might be wild, but he is so trust me
Your CD dusty once they start to bump me
These boys know, yes he rap the best
Plus he aim A-1, better rock a vest
I’m so serious homie, you hot? Show me
Nah you baloney, you worser than phonies”

Unfortunately, Nasty Nyne devolves into the same clichÃ© topics found on most rap CDs. He claims to go “through your speakers, open fire when I aim at your brain” while shit talking on “F You” and drops dope boy raps on “Iron Chef” and “Dope Superbowl.” Even with likes like “I make that white girl stretch, early morning calisthenics” the songs don’t offer much you haven’t heard before. “It’s My World” shows more promise with Nyne dropping lines referencing rappers as he claims to “make em Sway with a Tech.” Nothing else on the album is very memorable. Nasty Nyne weaves similar shit-talking dope rhymes on “Streets Is Hell,” “Get This Doe,” and “We Takin’ Over.”

Ultimately “Digital Dope” is just a generic version of something you’ve heard before. There’s nothing new or original to get out of the album. Nasty Nyne has a good voice and flow and some clever lines, but over all he reverts to tired clichÃ©s on track after track. That’s not to say the formula couldn’t have worked. Even with an east coast style and southern production, “Digital Dope” could have succeeded. The downfall is the fact that everything about Nyne and this CD is generic. I have no clue what Lansing, Michigan is like, how’s it like living or growing up there, etc. I have no clue what Nyne is about, where he came from, how he came up, etc. He might as well be every other rapper who claims to be the best, but does little other than boast. If he drops an LP with a personal touch and some Michigan flavor I’ll happily peep Nyne again, but for now “Digital Dope” is best left alone.