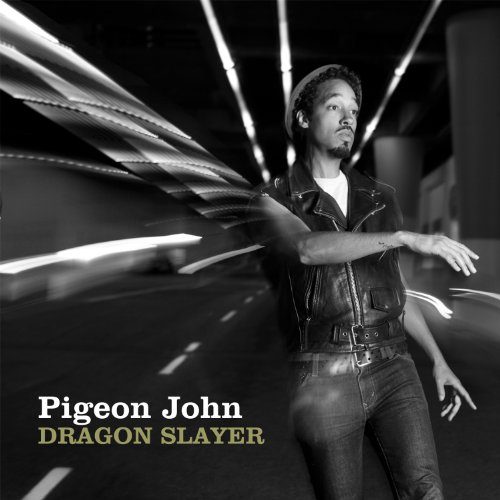 If you’re arriving late to the “Summertime Pool Party” that is Pigeon John, don’t sweat it. Go shower and change, grab a towel off the rack, get a drink at the open bar and pull up a deck chair. You’re only now getting comfortable, but the rapper/entertainer John Kenneth Dust already has been for years. The only downside to his career thus far is that he’s always been a little ahead of his time. He was Lupe Fiasco before it was cool to “Kick, Push.” He was Kid Cudi before he spent all “Day ‘n’ Nite” getting high. He was Lil Wayne before he decided to “Drop the World” and play rock music, and he was filled with “Magic” long before B.o.B took a page from Penn & Teller’s playbook. John is the constantly self-effacing artist, mocking himself for being unconventional and fitting comfortably into rap stereotypes, while simultaneously making some of hip-hop’s most interesting songs in the process. You never know whether he’s going to rap or sing before you play one of his tracks; either way they are so good you could care so less. Perhaps the most interesting and apt label that’s ever stuck on John and not fallen off is “consummate entertainer.” His album titles may be humorous but his music’s no joke, and as he’s about to prove on “Dragon Slayer” he may be the only man in 2010 who can sing he’s “So Gangster” and pull it off.

And just when you think California’s most unconventional G has come as far Straight Outta Hawthorne as he possibly could, he flips the script and stops singing:

“Yup, yup, I’m bangin some Depeche Mode
Windows down so you can see my fresh mode
Yeah my six-fo’ is only a Nintendo
But I’m smashin fools on some Super Mario
Never pictured myself sittin on some big dough
Used to +Singing the Blues+ on +6th and Alvarado+
I’m chillin in the back of The Belt chewing tacos
I feel like young Sean Connery in Cabo”

Okay a couple of those references were for old school fans who have his 2002 CD, but basically he gets his point across quite nicely – being G is what you make of it. Being unafraid to make the kind of music you want is just as gangster as being the biggest hardrock on the block. Both require fearlessness about how people are going to perceive you or treat you, and both require you to be uncompromising about the choices you are going to make to succeed – you either take it on with gusto or you fall flat on your face. John’s music is therefore G to the highest degree, and even though he’s using the song’s titular phrase for a laugh, his point is still essentially valid. He’s not kidding when he says “Hawthorne is backing me up” – they respect his G precisely because he feels free to be himself musically. On “Dragon Slayer” this is taken to even higher levels thanks to John taking over his production with the assistants of Herve Salters from General Elektriks. The already adventurous emcee is if anything more unrestrained, floating over melodies that can do little to restrain his ebullient personality. The hand clap guitar soul slap groove of “The Bomb” could be mistaken for Andre 3000 by the unobservant. “Buttersoft Seats” brags not about his wealth, but what he can do for his mom, his sister and his little nephew with his success. And for most creative flip of a sample ever, the award may just go to the musical reinvention of “um um well excuse me” from Pharcyde’s “I’m That Type of Nigga” for his song “Excuse Me”:

“Okay, hello everybody won’t you take a seat and listen close
Today is a story ’bout a young man that you seem to know
Born in Omaha then later his mom moved to the West coast
Inglewood to be exact, and that was a shock, in fact folks
Neighborhood Pirus would roll up in crews and try to jack him
He would try to make them laugh and pop like to a backpsin
Sometimes they would stall ’em out, and other times he would be scrappin
This made him into a man to never back down when attacked, and NOW…
Excuse me, can I be myself? And spit it like no one else
I think I got a story to say; well, maybe you better – make room!
(Excuse me) Maybe you better, make room (excuse me)”

When reviewing an album this fun and interesting to listen to, you have to avoid the tendency toward cliched phrases of praise, but Pigeon John makes that goal awfully hard to achieve. Perhaps John says it best himself in the press release that accompanies his new album: “Dragon Slayer isn’t a step away from my other records, it’s just on a different wave. It’s a little risky, but c’mon man, what am I risking anyways?” THERE YOU GO. John has decided the only barriers in his way are the self-imposed ones he put up due to being perceived as too weird or unusual for rap, and now he’s tearing them down and boldly going forward where no Cali rapper has gone before – well save for his Quannum Projects labelmates. Pigeon John has found a home in the music industry where he can’t be pigeonholed, where his compatriots are as eclectic and creative as he is, where he can release an album that’s his true artistic vision with no compromise or restriction. As reviewers we’re always warned not to crown something a classic too early given it may not stand up to the test of time, but I know from listening to this CD I’m going to want to listen to it again today, next week, next month and twenty-two years from now. Pigeon John isn’t just an interesting and weird cat, he’s an interesting and weird MUSICAL GENIUS of a cat. If songs like the semi-autobiographical “Davey Rockit” aren’t your cup of tea I understand, but John’s rap is the perfect example of artistic freedom personified.

“Cause momma was a weeping willow
His daddy wish he did the same thing years ago
When he was young he played the drums, opened for Artie Shaw
Wanted to be a jazz legend and a superstar
But his dreams faded when they had little David
He secretly resented all his friends that made it
And to be honest grew to hate and love his own son
And couldn’t understand where the rage was comin from
Davey and his momma was on tiptoes
Cause they never knew which daddy would open the do’
Either the mad, sad, happy or the drunk one
Davey like the drunk, it was the only time he spoke to him
He sat down and yelled for a Coors Light
Davey brought it for him, it was the only thing he did right
He said ‘Son, your daddy used to be sum’n
Now I work at some place that don’t mean NOTHIN
And you gon’ be JUST like your old man’
Davey laughed and said ‘Dad that’s the main plan!’
And daddy laughed at that
And told Davey get another from the six-pack”