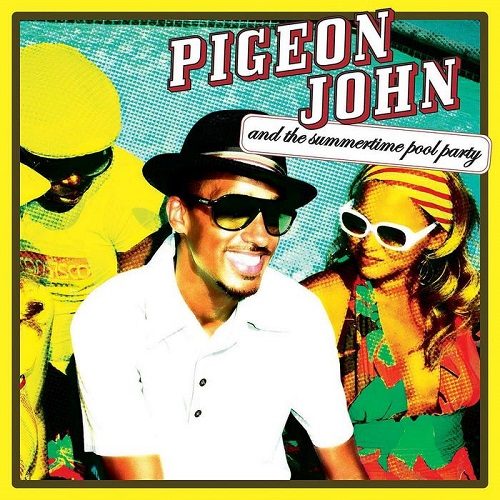 “What the fuck? Nigga why are you seein Pigeon John? What the hell? (I kinda like him. I like him!) You like him? Nigga are you a fool? What kind of motherfuckin rapper named Pigeon John?”

This skit entitled “I Thought You Was a G” perfectly encapsulates what today’s mainstream hip-hop audience thinks when seeing a Pigeon John album at the store in the “P” section right next to Pete Rock, Public Enemy and Prodigy. In truth the above is the uncensored version because Pigeon John is even more of a nerd than his name alone appears to be. “Pigeon John and the Summertime Pool Party” doesn’t carry a parental advisory sticker of any kind. How the hell are you gonna be hard with a name like Pigeon John, a title like “Summertime Pool Party” and a release that’s been completely excised of all curse words?

That’s precisely the point. John Kenneth Dust, a.k.a. Pigeon John, has no interest in being hard. There’s a tendency to cheapshot him among self-righteous hardcore “purists” for not keeping it real, including a poorly written Wikipedia bio that more or less mocks him for being born in Omaha even though he reps L.A., and claims he doesn’t fit into either city’s cultural scene because he’s half-black and half-white. Not only is that kind of thinking absurd in 2006, the uncredited author(s) of that biography show their ignorance by claiming Omaha is “predominantly white.” I think both North and South O would disagree with that statement. Regardless the document shows just what kind of hurdles Pigeon John faces trying to gain acceptance among the narrow-minded stereotypes of what hip-hop is and should be.

A gimmick change to “Johnny Chron’,” the hardest weed-smoking pistol-packing G in Hawthorne, California would probably get him over in a heartbeat if that’s what he really wanted, but the self-mocking skit suggests that Pigeon John relishes being dismissed and misunderstood, and the “Summertime Pool Party” album itself offers the proof. The DNAE produced opener “Welcome to the Show” has a whimsical horn arrangement and a laid back tempo that suggests early Pharcyde, a California group John clearly has more in common with than N.W.A. or 213. John promises in a sung chorus to help you “have fun in a major way” and then procedes to lyrically revoke any hardcore status he has while ironically being more of a rap purist than the G’s who hate him:

“Who rocks the mic, who rocks the mic RIGHT
Mr. Black Jack Tripper cause I do what I like
Between the Janets and the Chrissys of the world I stand
That jiggalo butter man, microphone in my hand ’til I die
Not doin this for money, not doin this for fame
I’m doin this so I can change the whole freakin game
Ni#%az in colorful clothes dancin like superh#%s
New MC Hammers get the +Gas Face+, you gotta go
[…]
New generation of just regular dudes
We don’t, dress the same or sing the same blues”

The self-censoring of tracks is as obnoxious and unnecessary here as it was on Danger Doom’s “The Mouse and the Mask” but is largely forgiveable due to John’s unrepentant hip-hop ethics. What ethics you ask? He’s professing the most ethical hip-hop philosophy of all where “keeping it real” means representing your true lifestyle and personality, not imitating someone else’s. If you’re a G or lived the life of a G before turning to rap it’s all good, but studio actors claiming to be hard when they’re soft as tissue paper do far more damage to hip-hop than a “motherfuckin rapper named Pigeon John.” Maybe it’s time to take a break from C-walkin’ and “Do the Pigeon”:

Musically “Summertime Pool Party” is as unpredictable as any Project Blowed or Quannum Projects album you’ve ever heard, and if you’ve never heard any of them then it’s a damn good place to start. “Higher?!” is an up-tempo bouncing self-produced beat that swings along Pigeon John’s natural high of living life while you get down “to the new James Brown.” Pretty apt self-description given John’s pretty damn good on the boards AND the mic, as evidenced by the humorous “Money Back Guarantee.” A heavy bassline and smooth melody provide John the chance to mack on a cute girl, offering her a refund if she doesn’t enjoy their date. Pigeon John never passes up the chance to make fun of himself in the process though, as he croons a ballad of promises and then raps “Okay – so that was a long chorus/but I really wanted to let you know I adore yas.” John’s not afraid to share the spotlight with other iconoclasts of hip-hop, bringing in DJ Rhettmatic for beats and cuts on “Freaks! Freaks!” and RJD2 to provide a subtle funk with heavy drums so he and J-Live can rap “The Last Sunshine.” The latter is the kind of collaboration that’s far too rare in today’s hip-hop:

J-Live: “Rock with me through the waves on the TV screen
Flash back the dream sequence yo whatever it means
Escape from the present time date and mindstate
Rewind to a clean slate and a full plate
106th where they maintain the wall of fame
Middle school showed me everything before was lame
Girls and basketball, my approach was the same
Couldn’t score had no game but had fun playing”

Pigeon John: “I miss those days we would skate from Hawthorne to Ingle
Wood under my feet remember every single crack
In the concrete makes my neck tingle in fact
This track gotta a nigga thinking way back in time
Way before I made a dime out of writing a rhyme
Go to Magic Mountain and cut in all the lines
Getting numbers let’s see who got the most and find
It wasn’t me but the brother named B and we
Would love to sneak in movies for free”

Along the way Pigeon John reminds you of a lot of different people for all the right reasons – the musical stylings of K-Os on “Brand New Day,” the hardcore Hieroglyphics raps of Opio on “As We Know It,” the simultaneously somber and silly flows of Aceyalone on “I Lost My Job Again” and the uplifting hip-hop positivity of Speech on “Growin’ Old.” The only downfall of Pigeon John, other than one of the singularly most un-hardcore names in hip-hop history, is getting the same kind of mainstream exposure as Chamillionaire, Nas or The Game without doing what they do. At the end of the day Pigeon John seems resigned to the fact that as long as he refuses to reshape his image and pose as being hard he’s never going to reach that plateau, but he’s HAPPILY resigned to this fate because in exchange for never going platinum he’s making heartfelt music that those with open minds can easily enjoy. “Pigeon John and the Summertime Pool Party” won’t make you the hardest b-boy, but it might make you one of the freshest.