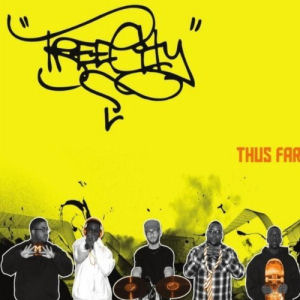 Tree City is a five man crew consisting of Cheeks on vocals, Clavius Crates on vocals and production, DJ Cataclysmic on the mic and (obviously) the wheels of steel, G.P. on vocals and M.I.C. on vocals and production. If the group’s name is not familiar to you, you can check out our previous coverage of their collabo’ with Black Milk entitled “Black Trees” or their shorter but equally enjoyable “TreE.P..” There’s just something in the water out there in Ace Deuce (Ann Arbor) because these Trees have grown strong in hip-hop. It’s a town that at times seems ready to tear itself apart at the seems, balancing a huge Wolverines college community with life-long residents who do not necessarily share their mindset on anything other than Michigan football – and not always that. Still having lived there and been to the “The Big House” myself I can tell you the game of pigskin is given more respect than the rap game, even though the influx of youth every year means the town always has a thriving underground hip-hop sound. Despite that there are only a few small venues like The Blind Pig dedicated to exposing local talent, leading many frustrated artists to pack it up and head to L.A. or N.Y., and many mom & pop record stores to turn their nose up on the underground before going belly up themselves.

Despite the difficulties inherent in their scene, Tree City keeps on growing, getting a little strong and more established every year that goes by. I’m not the man to come along with a chainsaw and chop it down – rather on “Thus Far” I’m here to celebrate their accomplishments right along with them. That doesn’t make me a Tree hugging hippie, just a man who recognizes good music when I hear it who thinks that Tree City has been kept quiet for far too long and deserves a broader exposure outside the harsh winters and boiling hot summers (especially during the numerous blackouts) one can find in Eastern Michigan. Speaking of Eastern, their sound is definitely heavily influenced by the sounds of New York City and Philadelphia, yet these Trees still got Michigan smoke coming out of their pores. The dirty drums and piano breaks of “Ace in the Hole” illustrate that mixture nicely – raw as a Wu-Tang demo but undeniably Ace Deuce.

“Yo, I’m so raw it don’t make no sense
The city of Ann Arbor where I make those hits
Hit Soto on the phone like I need that shit
He hit me back soon after like ‘Here, take this’
Put me on that list, of dudes that spit wicked
Way before I picked it, I knew that I was gifted
But the way the pen whips, somethin like a misfit
Battlin these dimwits who never gave a shit IF
I rolled over and died, my whole goal is the sky
Your folks ask me why I do mu-sic
I give an honest reply, not cause I want to be fly
Just spit what I like and don’t abuse it”

A lot of upcoming hip-hop artists sound like they’re one producer and one hit from being internationally known, but with Tree City the sound quality suggests they should be household names already. Ashod melds electronic sound with a zoo-like backdrop of chirps that’s not annoying in the least on “Crackdown,” then flips to an obscure Beatnuts worthy break on “Braintouchers” before bringing it to reverberating funky funk soul soundscapes on “Whose World” featuring Ant the Champ. Clavius Crates shows off his love of quick rhythms and tom sound on the appropriately named “Rubble Drums,” then gets straight sick on track one-six to bring down “Death From Above.” Speaking of apropos you can’t fault a producer for calling himself The Man In Charge when makes edgy and interesting beats like the ones heard on “Scattered Jazz” and “Doesn’t Matter” featuring Dante Peaks. From Magistek Legend on “What I Gotta Do” to Blaze One on “Strange,” a whole slew of different producers provide different sounds for Tree City with one common thread weaving them together – freshness.

The question remains after listening to 18 items and 1.1 hours of music repeatedly on “Thus Far” – it’s all dope but it has been for a few years now, so what’s next? Can Tree City have any hope of success if they stick with a city that doesn’t show half the love they show it back? That’s hard to say, and it’s even harder to imagine anyone dope not seeing Eminem’s hometown less than an hour’s drive away and thinking that’s the next step to making it big as opposed to staying in A Squared, the Double A, Ace Deuce, Ann Arbor or whatever you want to call it. It has been known as the “Tree City” itself for the longest time, and in general takes credit for spearheading environmental causes like Arbor Day, which means the dedication to making a change often seems more important than spending change on artists in your own town. I’ve got some advice that won’t cost you a dime though – if you’re going to U of M and you hear Tree City is playing somewhere downtown, take a night off from hitting the books to hear them live. If you can’t do that then at least preview their album for free on Bandcamp and see if it isn’t a breath of fresh air you’ll want to breathe some; then buy it online or at the nearest local store that has it in stock.