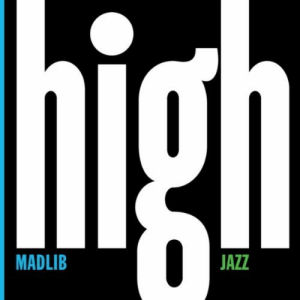 There’s an ice cream shop in San Francisco called Humphrey Slocombe that specializes in “unique” flavors. So unique that they got written up in the New York Times about a month ago. Their most famous flavor is Secret Breakfast, which is vanilla with bourbon and cornflakes. Some of their flavors, like Secret Breakfast, offer a unique take on old standards, and end up being really good. However, a lot of them are just weird. I’ve tried their Peanut Butter Curry, which was edible but wacky, their Salt and Pepper, which was kinda gross, and their Balsamic Caramel, which was fucking nasty. My problem with Humphrey Slocombe is that their ice cream is interesting, but not particularly enjoyable.

Which brings me to Madlib’s latest installment of his monthly Medicine Show, “High Jazz.” This disc contains thirteen songs of Madlib’s various avant-jazz incarnations. It includes tracks by Generation Match, Jahara Massamba Unit, the Kenny Cook Octet, Yesterday’s New Quintet, and R.M.C. What are these different incarnations? I don’t know. Are there other actual people in the groups, or is Madlib playing all the instruments? I don’t know, except that Karim Riggins played drums on some of the tracks.

Before I get too deep in my criticism, I should disclose that I don’t know a lot about avant-garde jazz, seventies or eighties jazz, or music theory. I own a lot of 50s and 60s jazz, but not much beyond that, and my collection doesn’t get much more far out than a few Sun Ra albums that I enjoy but don’t totally understand. I like jazz on an aesthetic, not intellectual level, appreciating how it sounds versus the theory and thought behind the composition. In short, I’m a lay person, so my observations and criticisms should be taken with a grain of salt. I’ve also not delved too far into Madlib’s jazz persona. The only album I own is his jazz-funk “Sound Directions,” which I liked. I’ve stayed away from his Yesterday’s New Quintet material, mostly because I was pretty sure I’d feel the same way I felt about it as I felt about “High Jazz.”

That said, I like what I like, and I wasn’t liking a lot of “High Jazz.” Partially because I don’t “get” what he’s doing musically, and don’t have a refined enough ear to appreciate it. Mostly, though, I didn’t get into “High Jazz” because many of the songs sounded half-baked and half-finished. “Reality or Dream” by the Big Black Foot Band featuring Black Spirit sounded like someone reciting poetry while the band warmed up. Generation Match’s “Electronic Dimensions” was a series of electronic blurbs and bloops that meandered around without any since of direction or purpose, like two stoned robots talking to each other.  Russel Jenkins Jazz Express’s “Drunk Again” sounds like three different bands playing three different songs at once. Jahari Massamba Unit’s “Pretty Eyes” and “Wanderin’/Nighttime” are pretty enough, but underwhelming, more background music than something that commands your attention.

I’m fully aware that as someone who is not a big avant-garde jazz fan, I could be missing the genius of these songs. To the extent that I’m not enjoying this album because I’m not smart enough to get what’s going on, so be it. My real complaint, however, is how half-assed and tossed off the above songs feel. Madlib has been churning music out like a madman this year, and I’m noticing a disturbing lack of finish to some of his output. It’s like he’s so concentrated on getting shit out the door that he doesn’t spend enough time editing what he’s doing, and the result is a noticeable sacrifice in quality as he increases his quantity. Madlib is a talented dude, and he should let his prolificness get in the way of making quality music.

Not that “High Jazz” is terrible. Things get more interesting on the deep spaciness of “Space and Time” by R.M.C., with its tinkling piano and heavy acoustic bass. Yesterday’s New Quintet’s “Conquistador” and the Big Black Foot Band’s “Tarzan’s Theme” also pick up the pace, providing a groove you can hold on to and sounding more recognizably like songs. Poysner, Riggins, and Jackson’s “Funky Butt, Part 1” offers up some funky latin jazz, and the disc closes with “Kimo,” a song by the Joe McDuphrey Experience that sounds like a jazz version of house music.

If you are a jazzhead, you might appreciate “High Jazz” on a level that I am unable to. Maybe I’m totally missing the point of this album. To me, it sounds like a lot of half-finished ideas that were rushed out to meet a deadline rather than a well-constructed, well-thought out album. Too much of it is like vinegar ice cream: interesting, but not very enjoyable.