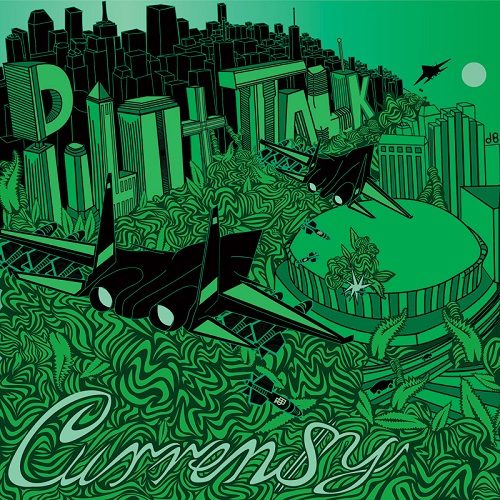 The name Curren$y first caught my attention when witnessing the dying days of the empire that was No Limit Records. The N.O. newcomer was loosely part of the 504 Boyz in ’02 and appeared on Master P’s “Good Side Bad Side” in ’04 before switching to Young Money/Cash Money, where he was featured on albums by Birdman and Lil’ Wayne. But Curren$y’s reputation in 2010 has nothing to do with these stints on labels that weren’t always the most reputable. Instead, it has everything to do with how the internet offers rappers the chance to reboot their career. Like in 50 Cent’s days ten years ago the vehicle to make a name for yourself is still called mixtape, but today the format has lost its physical restriction as digital mixtapes are let free by artists to roam the globe.

Curren$y had been releasing mixtapes during his tenures with both labels, yet things really took off in 2008 with free offerings such as “Independence Day,” “Higher Than 30,000 Feet,” “Fear and Loathing in New Orleans” or “Fast Times at Ridgemont Fly.” It was Curren$y’s independent internet grind that turned the potential would-be into a 2009 XXL Freshman, and it was his positioning in the here and now that made him attractive to mogul Damon Dash who hopes to build a new creative conglomerate that brings together art and business in an increasingly cross-linked world. “Where haven’t we been?” is one of Curren$y’s catchphrases, and with flying being his existential metaphor, it’s understood that this rapper definitely will be going somewhere. The question is whether enough people will care to join him on his trips and travels. The latest being “Pilot Talk,” his first release in a physical format after last year’s ditital-only “This Aint No Mixtape.”

Clocking in at a little over 40 minutes, “Pilot Talk” isn’t the release that will get Curren$y into the big league, but it’s a highly relaxing, unpretentious offering from a rapper who’s simply himself. Vocally coming across like Jadakiss or Kurupt on a chill day with a hint of that charismatic B.G. twang, he drifts across homely Ski Beatz tracks with an air of experience and serenity. The ex-No Limit Soldier remembers what the Colonel taught him when early on he confesses that world domination occupies his mind and when he presents himself as “an example / of what can happen when you quit bein’ afraid to gamble,” while the platitudinous imagery of “King Kong” would have been at home on any No Limit release. But again, Curren$y has broadened his horizon, and had he not, he would not be able to report: “Upstate New York, Woodstock, Saugerties / the view from my rocking chair you would not believe.”

Despite showing streaks of traditional MC megalomania, Curren$y hits us from an approachable everyman angle. Rather than showing off status symbols, he brags about his skills in writing raps and pulling chicks. He may be restless, stressing, “Came a long way / but I don’t got time to be sittin’ at the dock of the bay,” but the moment he writes and records his raps he’s audibly content with where he’s at. But would surely concur with fellow DD172 resident and Ohio transplant Stalley who ponders on “Address” “how a three-hour flight can make your life change” and how hard it is “to crack a smile when the ones you came up with not around.”

All of the cameos make sense, from affiliates Trademark and Young Roddy on the jazzy, Monsta Beatz-produced “Roasted” to fellow mixtape phenoms Big K.R.I.T. and Smoke DZA on the neo-soul-stirred “Skybourne.” Devin the Dude, Snoop Dogg and Mikey Rocks all chip in according to their abilities, but the album’s gran combo has to be “The Day,” a majestic track featuring a mystifying hook from Mos Def and a fiery verse from Jay Electronica, Curren$y not trailing behind:

“Brand new tires, rollin’ down the same ol’ strip
New party, same ol’ chicks
I’m so sorry if I don’t look happy to be here
and your label offers, but they said I can’t smoke weed here
Man fuck it, I’m out
Black-owned and I’m ’bout it, fool, I got a studio in my house
along with some of the perks that come with my work
Pretty 20-somethin’ sleepin’ in my diamond-supplied shirt
There is not a adjective to describe how I work
Hard is not enough, brother, I’m tougher
Wack niggas with that sleep-rappin’ and woke up in trouble
You was cool ten years ago, you fuckin’ Lex Bubbles”

Curren$y is not one to dazzle, instead he stimulates almost subconsciously with casually delivered lyricism – “Loaded bases, bring my team home / I’m the Great Bambino.” “Them niggas pickin’ sticks and seeds out of they weed / my bud covered in fuzz – but not surrounded by the police.” “I spit a complex venom / the real niggas it strengthens, the fake niggas, it kills them.” Or for the even more casual, extended version:

“In the buildin’?
Nah, I’m on the roof chillin’
The pool up here
couple chicks I grew up with
bottles in the cooler
If you don’t know how to do it
homie, I’ll school ya
Barrel roll, loop-the-loop, Top Gun maneuvers
Makin’ Hot Wheels outta hoopties
Holdin’ it down like balloon strings”

Maybe the highest praise one can bestow on “Pilot Talk” is that it is a real album, not really fit for phone speakers or headphones but best enjoyed on a home or car system, where Ski’s warm beats and Spitta’s hazy vocals can fill the space. The often difficult balance between beats and rhymes is achieved quite naturally here, surely a consequence of the expertise of all involved. Ski, best known for his contributions to Jay-Z’s classic debut but actually a longtime renowned New York beatsmith, has reached a level of down home coolness that enables him to use howling guitars, rolling organs, airy synths, and triumphant horns all to the same soothing effect. (The Mos Def-produced “Breakfast” curiously being one of the highlights of the set-up.) Curren$y readily embraces these soundscapes as reflections of his mood to craft a contagiously composed package. There’s no question that Curren$y’s current buzz is largely based on the fact that he uses the internet so effectively. But beneath the hip appeal he strikes a chord on a quite essential level where for once everything is like it’s supposed to be.