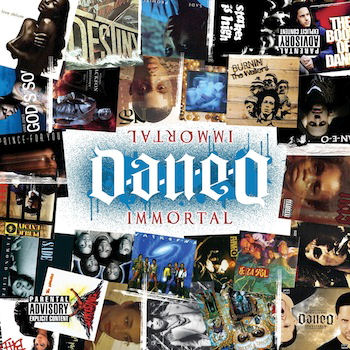 If you’ve already heard the newDan-e-o interview on the website today, props for heading on over to check out the “Immortal” review. If you haven’t, it’s not a prerequisite to this write-up per se, but it may shed light on what Dan-e-o is all about if you’re new to his music. Long time readersshould be familiar with his steelo though. We’ve been writing about him for almost a decade now, and he’s been in the music business even longer. His longevity would be impressive in any hip-hop scene, but regrettably his survival skills have not resulted in requisite fame South of the maple divide. Despite that Dan-e-o is “Immortal” – no matter how little or how much cheddar he has, no matter how little or how much mainstream airplay he’s getting, Dan keeps on outlasting his peers.

The title track of Dan-e-o’s latest short release (22 minutes) is also a tribute to hip-hop’s longevity, as he namechecks a slew of classic rap albums like “Illmatic,” “Buhloone Mindstate” and “It Takes a Nation of Millions” in a rapidfire second verse. In fact the whole album is a salute to classics in one way or another. “Eritrean Girl” makes absolutely no bones about the fact it’s a tribute to “Liberian Girl,” a song which has been sampled many times before in hip-hop. My favorite was always “Keep On, Keepin’ On” by MC Lyte, others prefer “Letter 2 My Unborn” by 2Pac, but this one pays homage to MJ in a way neither song does. The same can be said for “Worldwide Vapors” featuring special guests Big Kish and Maestro Fresh-Wes, an updated 2013 take on Biz Markie’s theme from “The Vapors” back in the 1980’s.

The entire release is a (free) prelude to Dan-e-o’s upcoming “Immortal” album, and ends with the uptempo sex song “Girl (Boom Boom Pump),” showing off not only Dan’s nimble lyrical tongue but his ability to assert the machismo and charisma of LL Cool J in his prime – where a breathy whisper was just as powerful as a shouted epithet. It’s Dan’s versatility that has kept him relevant throughout the years – he can flip the flow from serious to silly, from party to political, from hardrock to heartfelt at his discretion. This teaser has me excited for the full length “Inevitable” album due November 12th, and my suspicion is that if you download this free release and/or listen to the interview you will be too.