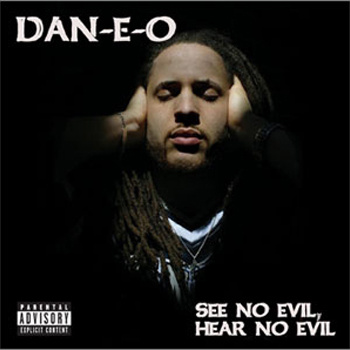 Of all the talented collectives currently operating in the Toronto underground, few pack as much muscle or command quite as much respect amongst scenesters as the Scarborough-based Monolith Crew. Boasting an embarrassment of ability, most notably the trio IRS, Monolith have through a reasonably young career consolidated their position amongst Canada’s most accomplished, bloodthirsty artists, crafting some of the most technically sophisticated, intelligent battle-oriented rap music in recent memory. Having dropped debut opus The Book Of Daniel to widespread acclaim in 2000, Monolith deputy Dan-e-o returns to reaffirm his status as one of Canada’s premier emcees, attempting to consolidate his relevance in a climate that has seen the rise of countless brazen young upstarts like K-OS, Ro Dolla, Nifty, Rochester and Talksick.

As with most Monolith material, this release reaches right for the jugular and wastes no time in declaring its modus operandi- refusing to meander into artier directions, this is straightforward, driving battle rap, aggressive 4/4 rhythms built around Dan-e-o’s intricate labyrinthine rhymes. Predictably, Dan rarely strays from his punchline-centered, multi-syllabic, Chino XL meets Big L template throughout the record, delivering countless punchy quotes in breakneck, relentless fashion. His breath control is quite remarkable in itself, as is his meticulousness- while complex in structure, Dan-e-o’s technicality never overreaches itself, everything is carefully metered and measured to fit perfectly with the beat. Additionally, while he clearly possesses a formidable vocabulary, Dan-e-o thankfully stays away from Canibus territory, thus avoiding the technicality for technicality’s sake ethic that plagues many self-indulgent emcees of his ilk. To be fair, though, despite his valiant attempts to inject some variety into the proceedings (the bouncy but ultimately flimsy “Foxy Lady,” the Red Rat featured dancehall barnstormer “Kama Sutra,” which fares much better), the incessant braggadocio runs a little thin and becomes redundant after extended listens, a pitfall that his precocious wit cannot save the record from. If you are in the pursuit of variety, you will invariably be frustrated with the often monochromatic content on offer here, an unpretentious excursion through vintage, mid-school battle rap.

That isn’t to say that there is a lack of bangers on offer here though- Lancecape provides several enchanting moments: the intriguing stop-start, scratch-heavy dynamics of “Inferno,” the Erick Sermon and Rockwilder-esque shuffle of “T.N.T.,” the classic rock riff driven stomp of “The Real Deal” (featuring the elusive Nish Rawks), the classic bass-heavy New Yawk romp of “We & You”. Meanwhile, the always-dependable Korry Deez laces IRS-assisted posse cut “Stand Clear” with thunderous, almost-Madlib bass. Bizarrely, the usually solid DJ Serious (responsible for such masterpieces as Canibus/Kool G Rap’s “Allied Metaforces” and THAT new banger with Masta Ace) puts forth some rather stolid tracks on this outing- “Foxy Lady” feels pedestrian and flat, while “Amazing” opens with the throbbing drums that opened a certain Tribe classic (cop the disc and guess), only to disappoint with its hapless reinterpretation of dancehall riddims.

Ultimately, if you are at all acquainted with Monolith’s previous output you know what to expect on this jawn. This is sincere, passionate and furious battle rap, a celebration of vintage East Coast street hop, replete with all the requisite elements- technical virtuosity, hefty doses of audacious wit and warm, unpretentious production that has no higher intention other than coaxing you to nod your head. If you can get down with dope, traditionalist battle rap, you could do much worse than invest your time and money into one of Canada’s foremost virtuosos. An impressive effort.