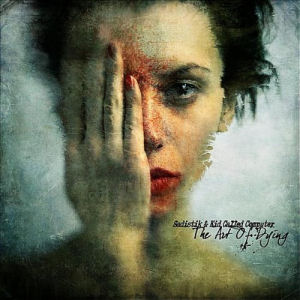 When I first listened to this album, I thought I was listening to Slug’s long-lost twin, or at the very least, his cousin. It’s not just that Sadistik channels the flow of Slug into his raps, but the same depressive and contemplative energy that would fit perfectly in “Lucy Ford’ or “Godlovesugly.” This whole release is run with a motor of emotion and melancholy, from the dark and symphonic beats to the skillfully crafted verses on melancholy topics, like death and heartbreak. The large influence of Atmosphere is apparent throughout this album, but I daresay it has a little bit more cross-over appeal. I mean, people more in-tune with their inner thug wouldn’t be predisposed to like this album, but I feel that “The Art of Dying” improves on the formula brought forth by early Rhymesayers shit.

“The Art of Dying” starts off with “Wake Up Dead,” with a long intro that sounds like Kid Called Computer is warming up the keys to start the journey into the melancholy. The beat mixes synth sounds with natural instruments to create good framing for Sadistik to strut his stuff. Sadistik is fond of the multi-syllable schemes, which matches the fast-paced drumlines that accompany the dark music. “Wake Up Dead” gives us a course in black imagery:

“You look into my eyes and try to find the breath of life
See all the mysteries and secrets that I kept disguised
Through all the perfect insecurities I meant to hide
Me in a way because I always felt so dead inside
Now I spell “dedicate” with another letter “a”
Walkin to the center stage, caught up in Heaven’s Gate
Every single step I take reminds me of the death I taste
Unfulfilled promises of what I didn’t get to make”

I like how Sadistik takes the time to add some more complexity into his schemes, and Kid Called Computer takes us on a tour de force by switching up the loops every two or three verses. The great thing about this album is that the songs switch up the loops often enough to keep the listening experience fresh, but not too much as to take away from the overall structure of the song. “Bed of Flowers” slows it down, with Kid Called Computer using more synth sounds to create a more technological feel to the song, and Sadistik bringing a more measured, more aggressive approach to the song. Helping to frame the song is samples of news clippings of the Virginia Tech massacre, which is interesting because I felt like this song tried to empathize with Seung-hui Cho’s point of view by throwing the listener into the dark sonic landscape that Sadistik and Kid Called Computer have constructed. Of course, you might get something completely different, I just thought that was an interesting response I had.

Next up is “Black Rose” with a decidedly lighter tone than “Bed of Flowers” and “Art of Dying,” but of course that’s a relative term. This song feels lifted straight from “Lucy Ford,” as it deviates from the fixation of death in the previous two songs, and starts to explore that melancholy that’s found in heartbreak. The tempo stays slow, with more instruments creeping into the music, and Sadistik coming with the bitterness and aggression of vintage Slug. It applies the formula beautifully, and even if it isn’t anything new, it’s still a well-crafted song.

My favorite song is the last one, “Ghost in the Machine” featuring Louise Fraser on the haunting chorus. Kid Called Computer brings some Yoko Kanno sensibility onto the track, and beautifully marries some gloomy piano progressions with some screeching synth and off-beat drums. There’s a beautiful chaos in the music that made the original “Ghost in the Machine” have such a great soundtrack. Sadistik brings the business too, starting off the song with:

“I’ve been dancing on the quicksand for one too many moments
Swallowin’ the sunshine is the company I’ve chosen
It’s the company of wolves, underneath the clothin’
They just hide the sheepish smiles that are sunk beneath the ocean
With the chitty-chitty-bang-bang
Pretty city same pain
Do-wop-ditty-witty-would he really let his fangs hang?”

Sadistik is deft enough at rapping to bring some swagger to his flow, although I never would’ve put “swagger” and “emotional” in the same sentence, Sadistik brings the two together like Jack Daniels and Coke, the powder kind of course. Kid Called Computer doesn’t have any missteps, carefully making each song with an attention to detail that is apparent on each segment of every song. In terms of pure talent, I can’t find anything to criticize on this album. I don’t usually roll with such emotionally heavy releases, but I’d proudly put this CD on repeat in the Honda Accord, no doubt.