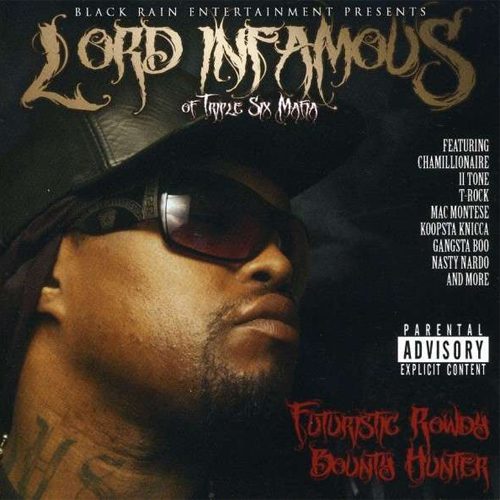 In June of 2010 the word went out to RapReviews and scores of other hip-hop sites that Lord Infamous suffered a heart attack AND kidney failure. With such a deadly double dose of medical maladies to deal with, it was entirely understandable that his PR people wanted us to all know “Futuristic Rowdy Bounty Hunter” would be pushed back and there was no longer a definitive release date. The health and well-being of one of the founding members of Three 6 Mafia was (and still is) far more important than any new songs or a brand new album. Since “Bounty Hunter” landed on my desk this week I have to assume his health improved enough in the interim to either finish the CD or master the already available material and put it out to the public. That’s no indication of whether he would (or even should) tour to support the release, but one can at least hope that it’s a sign of things improving – or at the very least one of those cases where the phrase “no news is good news” rings true.

“Ringing” is definitely one of the things a Lord Infamous album does. L.I. has been known since his earliest days as a lyrical leader at the forefront of hip-hop’s occult side. Even though the Mafia’s style evolved over the last two decades to become more commercially friendly, with only the name itself implying any kind of Satanic side, there was definitely a time in their history where they explored the mysteries of the dark side. Infamous stood out in the group for being willing to push their exploration of these themes to the maximum, and since being on hiatus from the group (it’s never been clear if he was asked to leave or parted ways on amicable terms to do his own thing until an eventual reunion) he’s kept that darkness alive. Even his label’s name Black Rain Entertainment implies an unnatural and ominous storm coming down on your head. Normally the only time of year I get into occult symbolism is Halloween, but if a black rain was coming down on my head I’d certainly wonder if it was the end of days. Infamous definitely enjoys spooking people – after all one of his many nicknames is ‘Scarecrow’ – a fact he references on the heavy beats and rhymes of “Don’t Stop”:

“When I grab the pad and pencil, oh it’s so essential
That the Scarecrow show you bitch-ass niggaz my credentials
Phrases and these metaphors I use ’em as utensils
Like a butcher as I carve in corpses my initials
Like I said before a nigga likely with a nympho
Sicker than them niggaz with that cell they call sickle
Toss you in the pond you hit and then the water ripple
Only way you walkin out this piece is as a cripple
When I walk into the rhyme get cold and harden nipples
Wicked shit is complicated, you niggaz too simple”

While Lord Infamous’ rhymes aren’t “too simple” they are definitely predictable to a degree, as he’s always proud to boast how hard he is and how much more gruesome he will get compared to his foes. It should be self-evident that it’s boasting, because if he was really tossing bodies in ponds he’d either be in jail or he’d be on the FBI’s most wanted list with a national manhunt out to find him. Nevertheless when it comes to macabre grim tales, few rappers can match his level of depravity on “Niggaz Like You”:

“My name is the Scarecrow, some say that I’m deranged
And if you come step in my slaughterhouse I’ll make sure that you not comin out mayne
I’m reppin up like Rain, bloody Memphis, Club House Click
Forever I came out to use up real bodies like you with the bitches real quick
A menacing menace to murderers, Lord and I’m comin real fuckin slick
I’m doin these niggaz real dirty, man I’ll shoot you in yo’ dick!
Listen closely punk bitch, you don’t want no parts of ‘Ric
Come and get with these killers, make you split your own wrists”

The one thing that might definitively be “too simple” about Lord Infamous’ “Futuristic Rowdy Bounty Hunter” is the liner notes. There’s absolutely NO production credits or guest appearance credits, even though the album’s cover promises contributions from Chamillionaire, Koopsta Knicca and Gangsta Boo among others. It’s not hard to pick out guests when you hear them, but it smacks of gross oversight to not list each track’s producer and credit each artist – they have to be to get any royalties coming their way anyway. Surely Black Rain Entertainment kept records of everything, and given this album was delayed there was no reason to rush it out without putting the info inside, let alone giving Infamous a chance to write a list of thank yous to people who supported him while he was in bad shape.

It’s hard to fathom why it was done, but more than that it’s impossible to either praise the producers who did well or blame the ones who did poorly in supporting L.I.’s efforts. “Bout It” has a classic Mafia sound, “Cry” sounds like a gothic bloody rap opera, and “In Da Hood” is the kind of anthemic song Infamous’ fans will undoubtedly love. There’s not much on “Bounty Hunter” that could cross over with a radio edit or music video, but “Jump” comes as close as any of them in terms of the sound and the tempo. Unfortunately the tempo is at times a drawback on this album, as “I Be” and “War Love” are two among many that seem to have no variance in pace at all. If you listen to this album straight through from start to finish for 50 minutes many of the songs blend together, and not in a mixtape kind of way. This is one of the few times I actually think more skits on an album would have been helpful. Still just in time for Halloween in 2010, Lord Infamous is back with an album creepy enough to keep his many fans and admirers happy while he continues to rest and recuperate so he can keep making more grim raps.