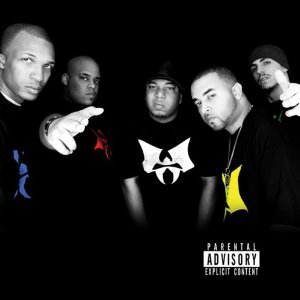 “Who leaves the rap game in critical condition/Enter the Watchmen, the answer to your wishin'”

In 1993, the Wu-Tang Clan took the rap game by storm with “Enter the Wu-Tang (36 Chambers),” as the supergroup of emcees brought a raw and gritty style to the East Coast hip-hop scene that was sorely lacking any hardcore influence until then. 17 years later, the Watchmen are trying to revive the rough and tough style that Wu-Tang embodied by going all out with a 36 track double LP. Hailing from Florida, the five-man group â€“ consisting of BlackMask, The Cipher, PRO, 7th 7ign, and Prox â€“ blends the old school Wu-Tang style with a more polished new school sound that resonates throughout the album.

The Wu-Tang Clan influences are present from the very beginning of the LP, as the intro track is a dialogue sampled from a kung-fu movie that begins with “So you are the new student.” The first real track, “Assassins,” features longtime Wu-Tang affiliate Cappadonna as well as another kung-fu sample and an eerie, high-pitched synth that sounds like something RZA would have used on “Wu-Tang Forever.” Throughout the song, the Watchmen reference popular lyrical themes of the Wu-Tang Clan â€“ chess, 36 chambers, etc. â€“ with line such as “swords clash, blood on the chessboard splash/checkmate, whack rappers is dead weight.”

The Watchmen also manage to incorporate some Latin music flavor from their Florida roots in a few of their songs. “Crusin'” features a chorus sung in Spanish by Hispanic recording artist Aileen Rosario, who is sure to seduce any listener with her stunning voice, with a xylophone and high pitched whistle in the background. And on “2010,” Latino rapper Polzino kicks the third and final verse almost exclusively in Spanish. The Hispanic influences on these songs contrast well with the rugged gangster vibes of the rest of the album and give the Watchmen their own unique production style that sets them apart from similar but less cultured groups.

The bread and butter of the LP, though, is the group’s ability to rip almost any track thrown their way, and the variety of beats found throughout the double release is remarkable. “3rd Eye,” which samples a 1966 Nancy Sinatra song, features sweeping orchestral strings that massage the brain and make for an almost hypnotic beat. On “Don’t Know Me,” over deep brassy horns and an aggressive, reverb-heavy drum loop, the Watchmen shout “who’s next for the slaughter?” as each emcee steps up and spits a verse. “Apocalypse” features a wailing, static-filled soul sample in the beginning, which meshes with smooth easygoing strings to create a mournful, reflective beat. Simply put, whether it’s the guitar laced ode to hip-hop “We Love You Too” or the piano driven “Everything” â€“ where one emcee proclaims “From the highest mountain, to the ocean’s deepest crater/I remain one of the greatest verbal illustrators” â€“ the Watchmen bring the heat on almost every track.

Releasing a double LP as a debut album is almost unprecedented, and it is certainly a bold statement to make, but the one shortcoming is that, given the number of tracks, there are bound to be a few that don’t measure up to the rest of the album. Songs such as “Throw Your Hands Up” and “Chinese Split” have a more mainstream feel to them and lack the lyrical prowess that is present on most other songs. While going with 36 tracks further solidifies the Watchmen’s ties to Wu-Tang Clan, one wonders whether the group could have released a slightly shorter LP without losing any quality.

The bottom line is that any rap aficionado, and especially any Wu-Tang fan, should pick up a copy of the Watchmen’s album. Are there a few “filler” songs? Maybe, but the point remains that the Watchmen have the lyrical skills and the Wu-Tang style of production â€“ featuring kung-fu samples, lots of orchestral instruments, and hardcore drums â€“ that make for a great debut performance. With a good mix of aggressive gritty beats and slower, more reflective tracks, the double LP has something to offer for everyone.