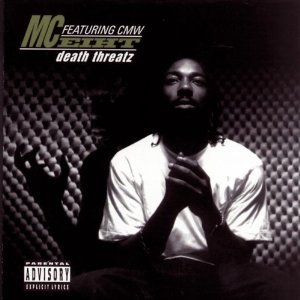 What changed in Aaron Tyler’s world between 1994 and 1996? Well, judging by “Death Threatz,” not a whole lot. Sure, ’94’s “We Come Strapped” had been his most successful record to date, reducing the shell of Compton’s Most Wanted to a supporting role as a veteran MC Eiht took the listener back to Compton aided by the masterful production of DJ Slip. Yeah, DJ Quik did record one of the most vicious diss tracks of all time, 1995’s “Dollaz + Sense,” in response to Eiht’s “Def Wish” series, leaving fans on pins and needles waiting to see how Eiht would respond. And indeed, the West Coast spotlight remained largely focused on the g-funk phenomenon and the Death Row inmates up the road. But for the purposes of Eiht’s second “solo” record, none of this was enough to make the CMW frontman slow his roll or break his stride, and “Death Threatz” picks up right where “We Come Strapped” left off.

Where “Music to Driveby” and “We Come Strapped” were celebrated for their lusciously smooth, soulful production techniques positioned against Eiht’s unapologetically violent rhymes, “Death Threatz” takes a moderately but markedly harder approach. Produced largely by Eiht and Slip but also featuring tracks from Austin Patterson, G. Reed, and others, the record sports a meaner, funkier sound than its predecessors, with ominous synths and more upbeat grooves added to the familiar swirling violins and sparkly keys provided by the invaluable Willie Z. “Death Threatz” features extensive contributions from the South Central Cartel crew and, perhaps most surprisingly, revered guitarist and bassist Rob “Fonksta” Bacon, a primary studio musician on DJ Quik’s LPs. From a musical standpoint “Death Threatz” is a total triumph; by this point Eiht and Slip had honed their craft to the extent that some experimentation produced resounding results, and the rugged sound fits Eiht perfectly. The chilling, expertly-arranged funk of “Ain’t Nuttin’ 2 It,” the bells-and-bass opus “Love 4 Tha Hood,” the snarling, syncopated drums and wailing strings on “Set Trippin’,” and the Willie Z showcase “Thuggin’ It Up” each provide more than flashes of the musical genius listeners had grown to expect from Eiht and company.

“Death Threatz” contains a few absolute essentials of Eiht’s catalog, which given his discography totaling upwards of a dozen albums should say something. “Late Night Hype, Pt. 2” is an infectiously smooth, soothing masterpiece and Eiht at his best. DJ Slip shines with a gem of a track featuring breezy strings, an easygoing bassline, and a trademark Willie Z piano performance, and Eiht responds in form. His fierce narrative of guns, robbery, and escape tactics would normally be completely inappropriate for such a musical backing, but this is classic Eihtâ€”his light, joyful delivery and exuberant adlibs make the track sound tailor-made for such fare as he one-ups “All for the Money” from “We Come Strapped”:

“… Somebody got two keys behind the damn do’
I look at my nigga and say, ‘What we waiting fo’?’
He said ‘I’m waitin’ on you,’ I said, ‘No shit?
Then step aside and watch this muthafuckin’ nine spit’
Ready to leave dead bodies on the curb
I’m go’n be sitting on fat when I get them birds
Not thinking nobody can do me
Through the back do’, I know it’s lookin’ like a fuckin’ movie
Big boss man behind the chair and he’s scared as fuck
Pop in clip number two and I commence to bust
Not givin’ a damn, mentality’s do or die
Hollow points hit the chair as the feathers fly
I hear him scream out loud, ‘Homey you dirty!’
I tell him, ‘Shut the fuck up, where’s the birdies?’
I grabs the suitcase, it’s good
Unloads my strap like a real G should
Like Santa Claus with a sack full of goods
I’m headed back to the hood
I’m back with a mack in the front seat of the Benz and I’m flossin’
Niggas get in my way and I’m tossin’
Not from Shaolin, but I’m down with the cream
They sayin’ shame on a nigga, know what I mean?
Gyeah, but I’m just that type
The niggas go’n pop you on the late night hype”

Late standouts “Fuc Your Hood” and “You Can’t See Me” are also phenomenal, placing cautionary verses over gorgeous melodies layered with tranquil strings and silky basslines. Nobody ever managed to make imminent death, gang warfare, and drug trafficking sound nearly as good as MC Eiht did, and these tracks are prime examples.

While the production more than carries the majority of “Death Threatz,” Eiht falters periodically with a batch of predictable material. Each track is an essentially similar first-person account of armed street warfare, and at times their impersonal nature and sheer redundancy can border on ridiculous. Prior to “Death Threatz” listeners could speculate as to what elements of Eiht’s tales were real and fabricated; here it became quite clear that his accounts had to be somewhat embellished. On the whole they lack the cinematic grip of “Take 2 With Me,” the desperation of “Hood Took Me Under,” and the hints of reservation of “Streiht Up Menace.” The glimpses of awareness behind his murderous demeanor were often the most compelling aspects of an MC Eiht track, and “Death Threatz” has the propensity to lapse into autopilot, over-reliant on his punchy delivery and constant exclamations of “gyeah” and “wessstside.” There’s also just too much of it at 72 minutes, and with titles such as “Killin’ Nigguz,” “Run 4 Your Life,” “Drugs & Killin’,” and “Killin’ Season” you pretty much know what you’re in for.

Looking back it’s easy to point to “Death Threatz” as the dawn of Eiht’s descentâ€”his last album with the CMW moniker on the cover, it began a schedule of annual and increasingly uninspired records into the new millenniumâ€”but listening to it it’s impossible to label this his fall from grace. The production is among the best ever found on an MC Eiht LP, and even though the subject matter can at times feel reheated Eiht still entertains with his trademark style and energy. Had it not been preceded by “Music to Driveby” and “We Come Strapped,” it might very well have been a much more striking listen, but either way “Death Threatz” once again finds pioneers of West Coast rap displaying their mastery of the genre on a record that still sounds great.