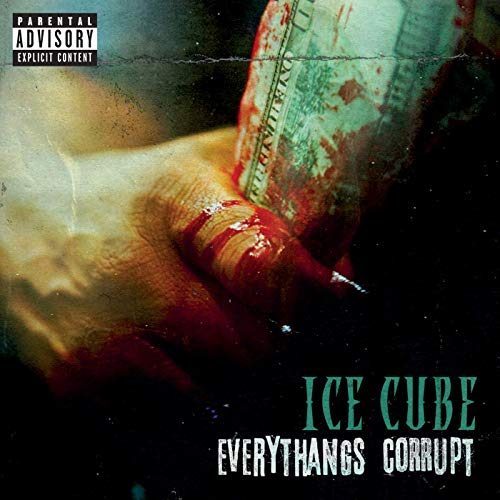 It’s possible in 2019 that more people know O’Shea Jackson as an actor than as a rapper. I don’t have personal knowledge of how Ice Cube thinks, but I’d dare say that doesn’t bother him very much, because he wouldn’t have gone eight years between albums if it did. During that span Mr. Jackson could be seen in both “21” and “22 Jump Street” plus buddy cop comedies “Ride Along” and “Ride Along 2”, while his son could be seen portraying HIM in the based-on-a-true-story motion picture “Straight Outta Compton“. Acting is definitely in the Jackson family’s blood.

Lest we forget that Cube cut his teeth creating hip-hop classics in the 1980’s and 1990’s, and continued to score hits throughout the 2000’s, Mr. Jackson is back with “Everythangs Corrupt” to prove there’s no such thing as retirement from hip-hop OR professional wrestling. The timing was initially confusing given the long drought between 2010 and 2018 before this album came out, but as the album’s opening song “Arrest the President” shows, Jackson has plenty of motivation to rap again. There’s little doubt who he’s talking about.

“Let’s meet at the White House
Run in and turn the lights out
Man, they treat it like a traphouse
Deez motherf—ers never take the trash out
They just cash out and mash out
Nigga take your drugs and pass out”

It just goes to show that the only thing necessary to bring Ice Cube back to the mic was the most racist, vile and corrupt U.S. President in American history. I’m sure it was only a matter of time before Cube had a full album’s worth of material to release, but having to see POTUS 45 every day on the news undoubtedly sped up the process. Having producers like Shawnski to work with didn’t hurt either. The heavy ivory keys and booming funk of “Arrest the President” harken back to some classic Westside Connection s–t. While Beau James doesn’t bang quite as hard on “Chase Down the Bully”, it’s an equally politically motivated song as Cube vows to hunt down “all you evil forces, with your tiki torches”. Once again the target of his rage isn’t hard to grasp.

Cube keeps his album firmly rooted in Cali with the beats, rhymes and the lone guest star Too $hort on “Ain’t Got No Haters”. The song borrows heavily from Delegation’s “Oh Honey” which for some will provoke memories of R&B hits by Total and Puff Daddy, but for me it will always be first and best remember as the backdrop of the seminal Geto Boys classic “Quickie“. DJ Pooh does the song as much as justice as anybody else to loop this smooth track over the years, and $hort’s boisterous bars include lines like “I don’t shop for bargains, f–k a pre-sale”. Word.

If there’s one other song on here that’s automatically worth the price of admission besides those already mentioned, it’s lead single “The New Funkadelic” without a doubt. The name is not a coincidence — T-Mix borrows heavily from Funkadelic’s “(Not Just) Knee Deep” and lets Jackson update it for the 21st century with his flow.

With so much time having elapsed between audio appearances by O’Shea Jackson, just having damn near 60 minutes of Ice Cube rapping is a treat. Of course just hearing him rap isn’t enough — the music and the lyrics have to be right. Whether it’s Teak Da Beatsmith hitting it hard on “Non Believers” (with an appropriate Flavor Flav sample) and “Can You Dig It?”, T-Mix throwing down on “Good Cop Bad Cop” and Fredwreck getting wreck on the title track, the albums thumps hard 90% of the time. The other 10% would be “Fire Water” and “Don’t Bring Me No Bag”, both of which seem to be going through the motions. It’s also important to note that even though O’Shea is okay when he’s fired up, at other times he seems out of step with the times. “Have you acting strange like the dog with the mange” is not what I’d call a good punchline on the too aptly named “Bad Dope”. On the WHOLE “Everythangs Corrupt” is a very welcome return, but we’re never getting back to the “Death Certificate” era again — this is as good as it gets.