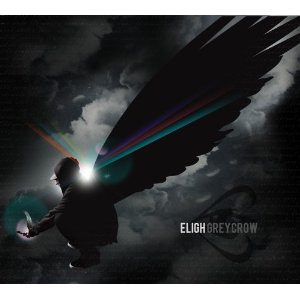 “So much to do and not enough time
Age is but a number but I ponder my demise
Only 30 years old as my fingers take a ride
Grippin on my pen I got what’s hanging out the side
of my ark that I was sho’ to build by feelings in my chest
My heartbeat is my guide I take what I need and bleed the rest
Yes, Eligh my title is vital I’m on a quest
Yes, one more recital recited for all my guests”

Reflections on mortality are not an idle exercise for Living Legends alumnus Eligh. This talented writer and producer was for a time knocking on death’s door and just waiting for a response, living on the streets of Los Angeles as he went from one heroin fix to the next. How does an intelligent, artistic, creative person wind up in such a personal hell? It is a question that history asks over and over again about now departed musicians like Jimi Hendrix and Layne Staley – people who even at the height of their fame and success are brought to depths of depravity by their drug use and addiction. One cliched response is that those with the gift to see the world for what it truly is are driven mad by it and are driven to drug or drink (see Vincent Van Gogh) to dull their sense of it. Another is that the active artistic mind is firing neurons so rapidly it craves a heightened sense of experience more than the average man or woman and will thus drive a person to try dangerous (and possibly) destructive things to feed the brain’s need. And of course some people just accept as a given that musicians, actors and otherwise famous people live a life of sex and drugs because it’s available to them and they can afford it – though if you wind up on the street it’s clear that a once affordable habit has most certainly gotten the best of you.

We can all ruminate on these different explanations until the cows come home, but Eligh’s not sitting around waiting to hear “moo.” Some inner resolve kicked in and the man simply got tired of being destitute and living on empty between brief and flickering highs. Perhaps it was around the time he released “On Sacred Ground” with folk singer Jo Wilkinson last year – perhaps before. Either way the bio that accompanies “Grey Crow” states that this is his first solo album since “Poltergeist” in 2003, and the emphasis in that description needs to be FIRST SOLO since his last album and many other recent ones have been collaborative works. In those cases Eligh has chosen to have a diminished visibility, staying behind the scenes as a producer but lending his name to the products which resulted from combined artistic creation. “Grey Crow” shows his willingness to step out from the shadows, addressing both his inner demons and outer need for self-expression, the artist who no longer has anything to hide. He lays his soul bare on the 17 tracks here, all of which are self-produced save the last 2, and songs like “When I’m a Dad” let us know just how he’s feeling:

“I can try to say that I was never one to run
But I was never one to say my daddy never taught me how
to knock a motherfucker out, or lay in bed and dread the day
you hear the scrawny kind of kid, target on his back
I never told my friends that I was tortured by the fact
I was in the minority […]
I never, regret that, when I think about the times
When bat boys wanna keep my ass for nothin in my mind
was stressed daily, now it’s funny, but then
I learned to pray to God because I couldn’t tell my friends
that I was bullied on the block, psychology getting punked
I never really got whupped or jacked, for my lunch money
But on the yard like a jail I kept my eyes peeled
Fifth grade on the battlefield man that shit was real”

Eligh vows that as a father his children will know that they love him and will grow strong in that knowledge, never experiencing the dread or doubt he did as a youth, pledging love to a child that has yet to be born. Would you say Eligh is a deep thinker? Yes, and also a fast flower – when he gets his engine revved he can at times be hard to keep up with. The diction can at times suffer too – it’s clear that even though Eligh has a lot to say he’s not always comfortable being in the spotlight to spit it. This leads to times on the album where his verbiage and storytelling are compelling yet his own delivery makes it hard to latch onto. More often than not though the desire to connect with the audience wins out, particularly given he can produce the right notes and beats to accentuate his deep and speedy vocal tones.

That said Eligh’s natural tendency to fall back is accentuated by an abundance of guests – almost two-thirds of the songs on “Grey Crow” feature someone besides just him. That’s not necessarily a negative given the people who he collaborates with are either likeminded underground rappers or Living Legends fam. “Love Ov My Life” with Luckyiam.PSC and Paris Hayes is the kind of song where Eligh’s production instants compliment his comrades ideally, as is the barren soundscape of “Stuck With You” featuring Aesop Rock and the sinister “Skitzo” with Ellay Khule, Basik & D.J. Bonds. The best of all of these joint efforts may be “Beneath the Sea” with long-time partner Scarub and Zumbi from the Zion I crew, the kind of song you can put on repeat and not get tired of for an hour – it has that breezy Left Coast avant garde hip-hop style crews like the Legends and the Project Blowed fam are famous for. In the grand summary “Grey Crow” is an album to be celebrated both because it shows Eligh’s triumph over his personal demons and it continues an artistic and personal journey which is as important to him as the listener – but thankfully it’s often enjoyable for the latter too.