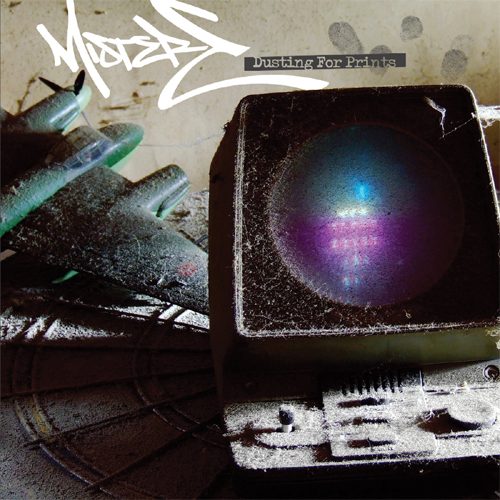 Before I begin reviewing this album I want to take a little bit of time to reveal something to the Rapreviews.com faithful. It usually takes me around ninety minutes to write a review, not including actually listening to the album, and I’d be willing to bet that I spend at least forty five of those minutes on the first six sentences. Furthermore, at this point I can’t help but to feel as though the opening paragraphs of my reviews are becoming a bit redundant, because of the last six reviews I’ve written for this site, five of them were by artists I’d either never previously heard of, or have heard of but never particularly enjoyed. MisterE’s “Dusting For Prints” is one of those albums. I’ve never heard of him, never listened to him before, and I don’t know where he’s from. For all I know he could be the kid that got arrested for trying to sell 4Loko out of his car outside of the local club last weekend.

All I have to determine whether or not I find MisterE worthy of being welcomed into your musical universe is a collection of seventeen tracks. The first of which is “My Turn”, which sounds like something off of “Orange Moon Over Brooklyn” by Pumpkinhead. The beat is slick, and within the first minute it becomes clear that MisterE has some legitimate talent. Also, he sounds a little bit like Celph Titled. The lyrical performance isn’t really all that mind blowing, but after being sentenced to writing a review of the new Gucci Mane two weeks ago; I’d have to admit that I’ve already enjoyed this album in the first five minutes more than I did the Gucci album. The second track, “Sound of my Horn”, is reminiscent of early Non-Phixion, or maybe Grayskul, and MisterE displays all the technical rapping skills necessary for a rap artist to warrant a second listen, at least in my opinion. “Connect the Dots” has a pretty banging beat, and MisterE turns in one of his more entertaining performances. However, it’s six or seven tracks into this album where one can’t help but to yearn for a departure from the core theme of “Dusting For Prints”. “Dowudido” would probably serve as the most effective indicator of whether or not MisterE’s music will be enjoyable to you or not, because the song pretty much summarizes the album as a whole.

I can’t say I’m aware of why I feel this way, but one of my biggest turn offs in rap music is rappers who endlessly rap about “lyrics” in every single song they make. MisterE doesn’t necessarily fall into this category, but I’m pretty certain that the grand majority of these seventeen tracks are about either about rap in general, the importance of lyricism in rapping, and how dope MisterE considers himself to be, and it’s that type of subject matter that I just can’t listen to consistently for a prolonged period of time.

For instance, Canibus is my favorite rapper of all time, but I cannot remember the last time I’ve listened to any of his albums released prior to “Rip the Jacker” because it was on that album where he began to effectively utilize his ability to tell a story while employing his world class attention to detail. I enjoyed “The Rest is History” by Jin because there were some banging joints on that shit. My boy and I used to play that album every time we drove to the club. Jin’s second album though, which was almost exclusively centered around hip hop culture, complete with vocal samples taken from KRS-One and Rakim songs, wasn’t even in my possession for three days before I traded it to a buddy for “All We Got Iz Us” by Onyx. I mean it’s one thing if the boasts and bravado are in the same league as “Illmatic”, or “Internal Affairs”, but those albums at least tried to mix it up. They represented a time and a place, they explored, and they exceeded the standard fare, and I don’t think that “Dusting For Prints” is nearly diverse enough to sustain the lack of variety in both the subject matter or production. “What’s On” deviates from the medium a little bit, a neat little homage to television shows of the 1990’s and how MisterE had particular routines specified for them. “Everybody thought Kelly Bundy was hot” he raps. Can’t say I wouldn’t agree there.

All in all the production is good, and MisterE is at the very least a capable rapper, with some charming characteristics in regards to skill set and writing ability. However, he isn’t the most exciting rapper you’re ever going to hear, and he could probably benefit from some charisma. That’s not to say he’s boring, but this album really doesn’t pop you in the mouth. Other than one or two duds, “Dusting For Prints” is impressive for the most part, keeping in mind this is the first I’m hearing from him. His pen game is capable, same with flow and delivery, and there are far, far worse albums out there than this one. I would suggest to MisterE that he shake things up a little bit on his next release, and do something to make himself a little bit more accessible, and his music a little more personal, or from the heart. He is a likeable emcee, but I don’t think he’ll reach his true potential until he gives a little bit more insight into who he is, and what makes him tick. However, “Dusting For Prints” does get a stamp of approval.