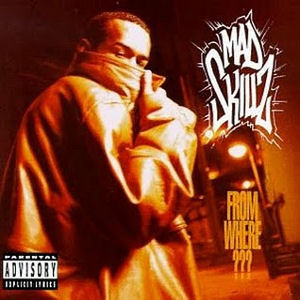 At the beginning of the new millennium Skillz reminded everybody that he had been the “first nigga to pop his collar on an album cover” (“S.K.I.L.L.Z.”). What to some may have sounded like a sad attempt to claim relevance, was not entirely inappropriate. Not so much because the statement was made at a time when popped collars were synonymous with rap cool, but because Mad Skillz in ’95/’96 wasn’t just a sharp battle rhymer and resourceful freestyler, he also had style. Don’t mistake fashion sense, pricey jewelry, luxury cars or upscale locations for style in rap. A rapper who has style (and not just ‘a style’) in the artistic sense aims for refinement and sophistication. Rap with class doesn’t have to mimick society’s conventions about good taste in design, fashion, cooking, etc. It can be loud, rugged, nasty – but it has to have that flair that makes something tricky look effortless. Old school hip-hop had style in spades, up in the Bronx where the people were fresh.

But Donnie Shaqwan Lewis wasn’t from one of the five boroughs – he was from Richmond, Virginia. “From Where???” Skillz summed up the Big Apple’s reaction to his provenance, similar to Maestro Fresh-Wes’ “Naaah, Dis Kid Can’t Be From Canada?!!” Like the Toronto MC, the 1994 Unsigned Hype alumni hooked up with exponents of the New York rap scene, most notably for the classic triumvirate “Extra Abstract Skillz” with Large Professor and Q-Tip. He had three Buckwild beats as well, but also made sure to consider Virginia production talent as embodied by Shawn J-Period (who some years earlier had taken a trip up north himself with his crew Down South). What’s more, two credits go to a certain Jaydee, more widely known as influential Detroit hip-hop maestro J Dilla. His beats for “It’s Goin’ Down” and “The Jam” are standouts on a well produced album.

The Beatnuts turn a well-worn Johnny Guitar Watson source (“Superman Lover”) into a personal career highlight for “The Nod Factor,” the ’95 single that may serve as an example for Skillz’ stylishness. The chopped guitar twangs and slick kick drums find their match in a rapper whose tongue is as quick as his wit:

“I know you’re tired of bouncin’, so check this here
We got the neck-breakin’, club-shakin’ beat for this year
Yeah – so peep the steelo and the flow
I got your head noddin’ cause your neck already knows
So pass the mic and watch Skillz rip fast
and have niggas up in parties catchin’ whiplash
Slash the wack for tryina bite my style
Take yo ass to the old school and part your fuckin’ eyebrows
I’m comin’ through, duke, it’s ’bout to get set
So act like Wu, protect that neck
Eject? Wrong, I’m still tendin’ to the song
I be blowin’ up spots like I was sendin’ out mail bombs
Stay calm and keep noddin’, see
I’m like a black president, cause niggas ain’t seein’ me
Has-beens, we bump like bad skin, so face it
After this joint – yo, we passin’ out some neck braces”

If you were a rap fan in 1995, you knew exactly what the nod factor was before you even heard that song. Skillz simply came along and put the hypnotic head-nodding effect of ’90s East Coast hip-hop into words. He also found words for other aspects of our music. He represents with “VA. in the House” and later invites homegrown voices for a duet (“Tongues of the Next Shit”) and a posse cut (“Unseen World”). The second single, “Get Your Groove On,” expresses the longing for an uncomplicated club experience without guest lists and quarrels. The Clark Kent-produced “Move Ya Body” attempts to bridge the gap between club crowd and hip-hop heads in Biggie fashion with couplets like “I don’t get writer’s block, yo, I block other writers / And there’s been nights I head to wear sniper attire for biters” and “I got to keep it tight like seams / cause ain’t no fiends comin’ in between me and my dreams.” “All in It” emphasizes Guru’s “Gimme a fly beat and I’m all in it” mantra, this fly beat being provided by Shawn J-Period, who crafts a contemplative background with instruments just barely resembling pianos and horns.

On “Tip of the Tongue,” while paying hommage to Organized Konfusion in the chorus, Skillz declares that “a real MC keeps his skills on the tip of his tongue” over a typically murky but epic Nick Wiz production. Nowhere is that particular skill more required than in a cypher, and since that’s his turf, Skillz captures the atmosphere on “Doin’ Time in the Cypha” together with Buckwild to a tee:

“This is our secret garden
Niggas are representin’ and nuff heads are noddin’
On the corners, without the mics
inside the clubs, without the spotlight
Packed in tight like we were all doin’ a bid
Fuck where you’re from, it’s time to shoot your lyrics, kid
Yo, flip the script, if you’re wack time’ll tell
Aww shit, my man lit up the L
So you go for yours, I’ma go for mine
Rapper after rapper, rhyme after rhyme
Hardcore punchlines and then come the riddles
It’s like gettin’ high when I’m standin’ in the middle
So freestyle fanatics and you bad-ass writers
your shit ain’t real unless it’s real in the cypher”

Skillz’ rap expertise is undeniable. He’s proven it with his crew the Supafriendz, with cameos on Timbaland albums, with losing only to Supernatural in ’93 at the New Music Seminar’s MC Battle for World Supremacy, with solo albums like “Confessions of a Ghostwriter” and “The World Needs More Skillz,” with his yearly “Rap-Up”‘s since 2002. “From Where???” is proof as well, but not conclusively. Vocally this rappper has such an attention-grabbing demeanor that lyrically one expects more of someone who presents himself as the incarnation of ‘mad skills.’ Despite ill lines (“If I’m up and comin’, all y’all niggas is down and leavin'”), there’s a shortage of truly dope raps. For example, were it not for the Jay Dee beat, it’d be a pain to listen to the lyrically bland “The Jam,” whose only nugget is the Method Man quote Skillz uses for the hook.

Recording a solid, well rounded album (see the cautionary “Street Rules”) comes at the expense of the sheer brilliance this rapper might just be capable of. Back in the day I couldn’t help but compare “From Where???” with another 1996 album, Chino XL’s “Here to Save You All,” even putting one on the a- and the other on the b-side of the same tape. Chino tackled both battle raps and conceptual songs with a radical attitude that Skillz lacked. Where Chino XL was a tad bit too inconvenient, Mad Skillz was just slightly too much on the side of convenience. In its final stage, “From Where???” begins to measure up to the songwriting exploits of “Here to Save You All.” On “Inherit the World,” Skillz destroys everything in his path, only to find out that without opponents and audience hip-hop is no more: “Why write rhymes – who’s gonna hear what I have to say? / And if I do, who’s gonna appreciate it? / Humanity terminated, I’m alone and I hate it.”

Ultimately, the fact that he has style comes to Skillz’ rescue, making that “From Where???” is a satisfying debut and formidable representative of East Coast hip-hop, albeit not a masterpiece.