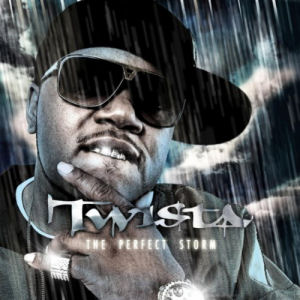 In the meteorology of hip-hop Twista’s career has gone from record temperature highs to barometric pressure lows over the span of two decades. When “Kamikaze” dropped it was hard to imagine any rapper being hotter, but for multiple reasons (including music industry politics) he was unable to maintain that momentum. What followed wereunderwhelming new albums that while still good by contemporary hip-hop standards did not hold up to Twista’s previous efforts. To be fair though these albums could be considered classics compared to misguided side projects that featured Chicago homies and his Get Money Gang familia. Our staff writers were brutal in their assessment of these albums, but also entirely fair in recognizing these were ultimately destined for clearance bins. These albums slowed Twista’s momentum even further, downgrading him from a once powerful hurricane into a much less devastating tropical storm.

“The Perfect Storm” attempts to put Twista back on the weather map for 2010, recognizing that the legendary rapper needs to appeal to both his commercial crossover base and his hardcore fast flow fans. It’s a difficult balance for any rapper to strike, but even moreso in Twista’s case given few underground rap sensations ever became an “Overnight Celebrity” to near the degree he did. Thus there are songs on Twista’s new CD like “Back to the Basics,” produced by long-time collaborator Legendary Traxster, keeping the background beats both minimal and sinister in the style that allows Twista’s famous rapid-fire lingistuics to dominate easily:

“I’m about to take everybody back to the basics
I’m historical, an oracle, an event is about to occur
because a motherfucker put these raps in The Matrix
And I’m terror when I spit it on tracks full of hatred
But it’s beauty in the dark; just put in your mouth
and the flow is mmmmm like that when you taste it
Come at niggaz like a disciple of death
You would think I’m poppin the rifle or Tec, I’m aimin right for the neck
Your momma might as well call up the funeral home
so she can write ’em a check”

And there are songs like “Make a Movie” featuring Chris Brown which harken back to the freak flop flow of “Slow Jamz,” with the perfectly contradictory combination of fast slung lyrics to slow quiet storm grooves:

“Shorty we gon’ make a movie
Got me lovin it when I’m feelin on the booty
Especially when I can blame it on the alcohol (alcohol)
Cause it do somethin to me
She look better than every chick in my perimeter
Sexy, I wish I could film every bit of her
Kiss her neck down to her stomach and then I’ma
tell her we can be in our personal cinema
I’ll let you hold the camera first then I’ll hold it then
Cause I wanna see how it’s comin out and goin in”

For lesser talents this constant change of style could seem mentally or artistically unbalanced, but Twista sticks to his Windy City roots and allows the storm to surge when needed and ebb once the tornado passes. As such Twista can go back and forth to freaknasty melodies like the Tight Mike produced “Sweating” featuring Scotty and the heavy handed Street Runner laced “Cocaine” with Yo Gotti and not seem contradictory. Not all of his collaborations are winners though – the beat and rhyme of “2012” are fair but Tia London’s vocals are not improved by the AutoTune treatment they receive. It was probably necessary to include Waka Flocka Flame on the album for marketing reasons, but his contributions to “Hands Up, Lay Down” drag what could have been a good Twista/Traxster track six feet beneath the earth. And with no disrespect to Dawreck, he just seems like another one of Twista’s Chicago posse buddies that make one cameo on an album and then disappear right back into obscurity on “Darkness.”

There’s more to like than hate on “The Perfect Storm” though, particularly if you come up on the “bonus track” version which is (1.) a third longer than the regular release and (2.) has no tracks which shouldn’t have been included to begin with. These are not throwaway songs in any sense – from the super quick tongue twisting flow of “Pussy Whipped” to the electric funk crossover potential of “Bad Girl” featuring Lloyd to the surefire mixtape sensation “Heat” featuring Raekwon. It’s inexplicable that someone thought it was acceptable to release “The Perfect Storm” and cut it at #11 with “3 Minute Murder.” If you decide to cop this album and the copy you hold doesn’t have songs 12-16, wait and go back another time to get one that does. Twista hasn’t completely recovered from all of the mistakes and music industry setbacks of the last decade, but his storm is gathering strength in the 2010’s and beyond.