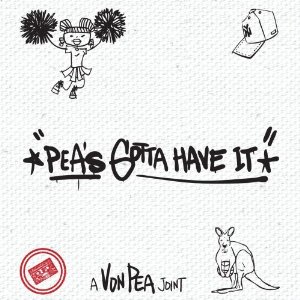 Von Pea :: Pea’s Gotta Have It

“Pea’s Gotta Have It” came about when Tanya Morgan producer/rapper Von Pea was cleaning his bedroom and came across his high school journals. His trip down memory lane gave him the inspiration to make a concept album about his high school days, going back a decade to think about what life was like as a teenager in Brooklyn. The result is fifteen songs and two skits that all deal with different aspects of high school life.

You might expect a high school-themed album to lighthearted, full of songs about being in detention and trying to get laid. That side of being young is definitely represented here. “We Should Be Rocking” and “There U Were” are about youthful conquests. “New Pair” is about buying new kicks. On “Open School” Von Pea and Danny! trade rhymes about getting sent to detention for writing rhymes in class and getting bad grades because they spend all their time making beats.

There are also songs where Von Pea’s older self reflects on being young. “The Yorker” acts as shout-out to his home town, and a portrait of the artist as a young man. He also captures the confidence and feeling of unlimited potential of being young.  “I Know We’re Right” channels the swagger and confidence of adolescence as Von Pea and female rapper Keisha Shontelle drop rhymes about their dominance. “Thanks for Your Children” has Che Grand and Elucid rapping as kids criticizing the world of adults. “Good Life” is written from the perspective of a teenager daydreaming about how big he is going to blow up by his twenties, living the “Good Life.”

It’s not all sex and hijinks, though. The album makes reference to the violence happening just outside the classroom. Detention and bad grades aren’t Von Pea’s only concerns. “Don’t let the gentrifying hide the fact that kids are dying” he warns on “Boombox,” and other songs touch ojn the stick up kids and senseless gunplay that were a constant threat in his high school days in the BK.

I would describe Von Pea’s flow as laid back, but less generous listeners might consider him boring. He shares the flat delivery that seems endemic to rapper/producers. Like Madlib, J Dilla, and Dr. Dre, Von Pea doesn’t exactly set the mic on fire. His style is conversational, with lines peeling off his tongue in a casual, relaxed manner. I’ve always loved his style, and I think he’s a better rapper than most producer/rappers,  but even I have to admit that he’s not the most dynamic MC out there.

Luckily, he’s accompanied on the mic by more expressive rappers.  Jermiside, Ilyas, and Spec Boogie show up on “Dreams,” which outlines three very different daydreams – from violent death to chilling with your pop and the A-Team to getting laid. Brick Beats lays down a mellow, soulful beat and the four MCs let their imaginations go wild. Josie Stingray and Rapsody trade bars on “New Pair,” and Donwill, Aeon, and Lee Sissing takes turns on the mic on “We Should Be Rocking.” They add variety to Von Pea’s monochrome flow. Special mention goes to the two female MCs, who are both impressive, and Von Pea’s fellow Tanya Morgan bandmates Donwill and Ilyas. It’s nice to know Pea isn’t burning bridges with his solo joint.

Even on his own, Von Pea can generate heat. The strongest track on the album is the outro, which is a song titled “Outro” vs. a album-ending skit. Von Pea uses a banging beat as a backdrop to tell the story of a thirty-year-old realizing that his high school dreams haven’t come true.

It ends with a chorus of “Tear this shit down!,” where even Von Pea’s mellow flow can’t disguise his anger and frustration.

Von Pea takes the boards on several tracks, but this is mostly Aeon’s show. He produces half the album, offering up some 90s sounding hip hop, making generous use of soul and jazz samples. It fits in nicely with Von Pea’s tracks, which have a similar sound. Brizzo produces the more lively cuts on the album, including “Outro,” “Pep Talk,” and “Thanks For Your Children.” He keeps things from getting boring, spicing up the album nicely.

At the end of the day, “Pea’s Gotta Have It” is a well-executed if understated album. It doesn’t jump out of your speakers, and there aren’t any real bangers on it. What it does well is offer up 15 examples of hip hop that isn’t jumping on any bandwagons and isn’t trying to be anything it’s not. Von Pea colors his youthful experiences with the experience that comes with age, and the result is an album that is humorous, thought-provoking, and head-nodding. It may not be the album of the year, but it could become the album that you keep coming back to.