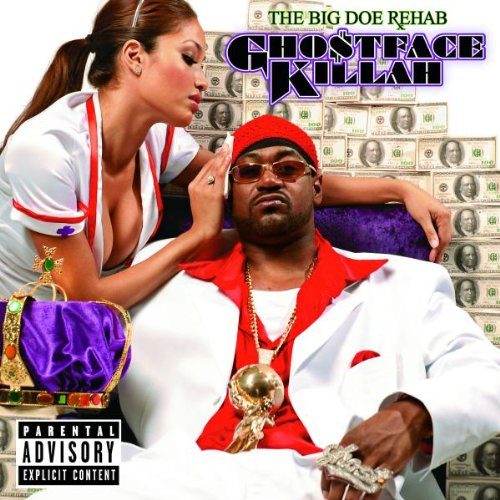 If Ghost has anything going for him after all these years it’s that he’s still one of the best storytellers in rap, in or outside of the Wu.

“The way I fell cracked the face of my watch
My mans chantin me on like ‘Run son, don’t go up in the spot!’
Jettin through bushes and backyards, neighbors is rattin me out
Dogs is barkin, all you hear is the cars
Sirens, I’m tryin to think and toss the iron
Blood on my sweats, got me runnin from, you think I’m lyin
May God strike me if you don’t like me, I’m tired and I’m outta breath
The weed got me paranoid, my heart’s poundin through my chest
[…]
Next thing you know I’m this bitch crib, chillin
Told her my story and like this I had her legs on the ceiling
Cooking me fries, fishsticks, and a side of them biscuits
While she doin this, the bitch still slidin on lipstick
Now I got the fat stomach on, she crackin a dutch
and playing with her pussy on the couch, I’m ready to fuck
Like commandments, lay you out, where you put the condom box
You finished off the last one, OH SHIT I HEAR THE COPS”

Ant Live mixed a smooth combination of wailing singers, fat bass and smooth strings for “Yolanda’s House” above and like an old school Wu-Tang house Method Man and Rakewon the Chef slide on to tell their portions of the narrative. In fact “The Big Doe Rehab” is loaded up with guest appearances. Kid Capri provides the hype on the LV & Sean C. produced “We Celebrate.” The Rhythm Roots Allstars salsify things for all of 37 seconds on “!” and it’s a shame they weren’t on longer. It’s hard to be mad about it when the next track “Killa Lipstick” rocks the old school “Ridin High” sample that will no doubt give you flashbacks to songs by O.C. among others. Chrisette Michelle stirs thing up on the singing tip for “Slow Down,” but it’s not meant to evoke a mental image of Brand Nubian – they literally SLOW DOWN the beat when she sings the chorus. Perhaps the most surprising cameo is Beanie Sigel on “Toney Sigel aka Barrell Brothers” – he flows so long over The Hitmen track that they eventually just have to cut off the beat and the rhyme.

Rest assured though if you thought Ghost was breaking away from the Wu that “The Big Doe Rehab” is still Wu-affiliated to the death. “Yapp City” rocks a Scram Jones track and Trife Da God helps Ghost flip on the slow and deadly melody. “Rec Room Therapy” blows things up with U-God and Raekwon, and the Baby Grand beat is reminiscent of a classic Wu banger track for all the right reasons. The track that will absolutely make 36 Chambers heads flip though is “Paisley Darts,” an overloaded all-star affair with Raekwon, Sun God, Trife Da God, Method Man & Cappadonna all rhyming in the cipher. Some will probably note that “The Big Doe Rehab” doesn’t feature any production from RZA, but at this point in Ghost’s career his sound is a success with or without the “traditional” Wu-Tang production crew. On the flipside some will argue that Ghost played it safe with the tracks here, considering Redman already blessed “Superman Lover” over 15 years ago and put the definitive stamp on “leaping over tall buildings in a single bound.” That’s not to say “Supa GFK” isn’t a fun song, but oddly it seems that Ghost just decided to rap over the whole song without even looping any part of it, which means there are times his vocals conflict with the track’s.

“The Big Doe Rehab” is an album that falls right in the middle of the pack as compared to Ghostface’s extensive catalogue. While it doesn’t surpass “Supreme Clientele” or “The Pretty Toney Album” it can’t be considered the letdown that “More Fish” was either. The OTHER thing Ghostface has going for him at this point in his career, besides being one of the best storytellers in rap, is his general consistency from one album to the next. Even the weaker of Ghost albums tend to be relatively strong compared to some of his peers, both in and outside of the Wu, and “The Big Doe Rehab” is no exception.