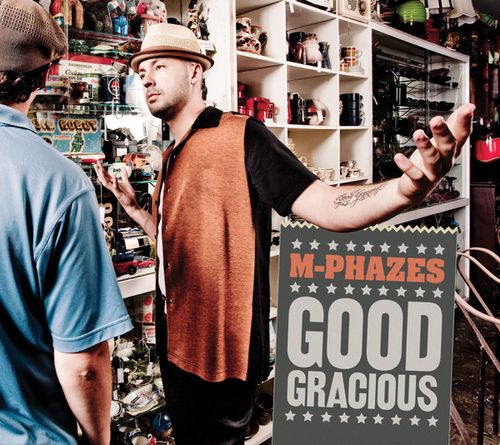 Undoubtedly the name M-Phazes would sound foreign to the ears of the average hip-hop listener. Quietly though, Australian-bred Mark Landon has made a name for himself in America producing for the likes of Redman, Pharoahe Monch and M.O.P. His skills behind the boards have also garnered him first place in 2008 during Sha Money XL’s renowned One Stop Shop Producers Conference Beat Battle. Released in February 2010, “Good Gracious” is a compilation album that features some of the finest Aussie rappers rhyming over Landon’s signature boom-bap production. The record explores and celebrates many of the elements that make hip-hop beloved around the world.

The inspirational “For What It’s Worth” featuring Solo begins slowly with the rhythm and bass guitars providing the perfect backdrop for the rapper to reminisce over the good times he has shared with hip-hop. The track gets even better when the horns and orchestration set in while Solo spits introspective raps about his genuine passion for the genre and how he has achieved self-actualization:

“I had a part-time job so I’d work all week
then blow my whole paycheque in a few seconds
And if it had that Oz Hip Hop sticker on the front
you could bet I’d pick it up and add it to the collection
Something bout the way my native tongue
sound over dirty drums is like I found a connection
And looking back now I bought a lot of classics
But I also spent a lot of cash on a lot of wack shit
And if I added it up I’d probably cringe at the thought
But really I got way more than I bargained for
Cause if I could put an hourly wage
on all the time that I’ve spent locked away with a pen and a page
Or every drop of sweat that I shed when I step on a stage
then brother I’d be getting paid
To some it might sound crazy
But music took me in, taught me and shaped me
And the life lessons learnt over break beats
are worth way more than anyone could pay me”

M-Phazes continues to craft solid instrumental tracks with this theme as NFA’s “Keep Running” features a bouncy vibe with a mean guitar riff, while 13th Son’s “Triumph” provides celebratory horns over hard drums. Both tracks profess a love for hip-hop and explore refreshing concepts such as self-belief, dedication and hard work. Even when M-Phazes throws the listener a curveball with the electro-tinged “Music Box,” the song doesn’t feel contrived and provides a nice change of pace for the record.

On the other side of the spectrum, “Good Gracious” celebrates lyricism within rap through tunes like the menacing “The Freak Show” featuring Mantra and “The Facilitator” featuring Dialectrix through braggadocios lyrics and spit-fire flows. The continuous humming in the background, along with an organ and violin departs from the other two styles on the Bliss N Eso “Walk on Clouds,” but the lyrics hit harder than any other track on the album:

“One two, one two, we’re back at it again
The renegade razor blade when I’m packing a pen
Put away them toys, I don’t play that junk
Simply cause my mother didn’t raise no punk
So colour me bad when I walk in my room
with a spliff and a pain-filled water balloon
And speaking on spliffs, pass that shit round
cause I’m known for hitting that BITCH like Chris Brown!
Say get down! Shake, rattle and roll
The crowd is shitfaced and out of control
Say get back! They better make some room
cause your man Mac is back and I just ate some shrooms
That’s the naked truth and I’ma fucking raise the roof
I do the drunken river dance, my fucking favourite move
And if life’s a beach, then I breathe with it happily
cause just like that I turn dreams to reality”

Much like the celebration of bravado, success in hip-hop on a mainstream level is usually measured through conspicuous consumption. Hedonism is the most primal aspect of humanity and works best in hip-hop if the concept is flipped in a unique way. The hilarious and jazzy “The Club Song” featuring Forthwrite shows the emcee duo talking about getting plastered at a club, stealing a DJ’s microphone and getting tossed out. The album’s first single “Goodbye Gravity” featuring Muph & Plutonic does this as well, with Muph telling a vivid story and admitting his own defects of character:

“Yo, first sip, lips on a bottle of Spumante
Never knew she could be so truly demanding
I’m handed the answers in the form of a solution
Liquid, the problems forgotten when I drink it
But don’t get it twisted though, I’m pro party life
You ain’t gotta ask why
Just look to the laughs and the stars in our skies
Now sometimes even a barfly can’t master his high
So I’ma say goodnight, goodbye to gravity
Crooked flight academy flying throughout the galaxy
Happily lost in my space
Phone switched off cause I learnt from that play
Drunk dials, they ain’t smiles when you come to again
The mess that we made, the who we called and the what we say
All part of the performance we gave
Can’t recall getting home, but we all okay
So it’s okay”

Though Landon’s old-school, boom-bap production can get repetitive at times and many of the rappers lack the swagger and charisma necessary to cross over to the pop world, “Good Gracious” is as solid of a compilation album as they come. Traditional hip-hop elements are truly represented on this celebratory record showing a wide range of perspectives and styles. In a world full of electronic, dance-oriented hip-hop, this album is a breath of fresh air.