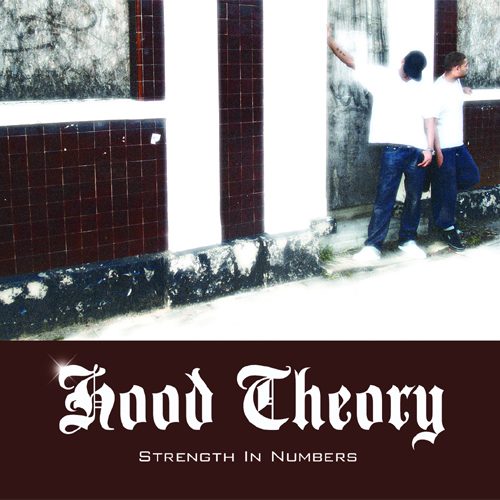 Hailing from Bedford, in the UK, comes a new hip hop collective with an old school throwback feel. This album officially dropped just over a year ago, but it’s fresh enough to not be considered as a Back to the Lab feature. That freshness consists of a producer (The Passion HiFi), and two mic men (a Jamaican named Jon Pecos, and a British Indian called Switch). A lean, thirteen track 43min offering â€“ always advisable in today’s crowded and overstretched marketplace â€“ “Strength In Numbers” is a raw offering, containing some notable triumphs and, unfortunately a couple of let-downs.

First things first, the absolute best thing about this LP is the production, handled exclusively by The Passion HiFi â€“ it is good, very good. It contains all the prerequisite DNA of hip hop production that you’d expect in an underground group, but Passion HiFi just seems to understand it, and have the necessary nous to combine it with his innate musicality. He has that 9th Wonder feel, alongside a Black Milk sensibility and that Dilla-like attention to detail. It’s one thing to spend a week on a beat, but if it’s still a weak beat, you ain’t got that special spark â€“ luckily, Passion HiFi proves himself as one to watch over the coming years. Whilst the UK mainstream is courting huge OTT radio anthems, there will be space opened up for straight up hip hop producers to craft album material, so let’s hope that Passion HiFi continues to burn with the same passion he’s displayed on “Strength In Numbers.”

From tracks like album opener “Anthem” to the sweeping violins of “We Can Do This,” the understated lounge music of “Feelin’ Your Energy,” the bass on “Memory,” you start to get a feeling that Passion HiFi could really make a name for himself, deservedly so too. But enough of the production, what about the MC’s? Well, there’s good news and bad. Which one do you want first?

The Jamaican spitter/singer Jon Pecos, or Jon P, is â€“ surprisingly so â€“ quite excellent. I wasn’t really filled with hope when I read of his involvement â€“ not him personally, but I guess I’m just used to Jamaican artists being ridiculously corny on hip hop albums (“Distant Relatives” was a fluke exception). But Jon P does a very good job, I could imagine him being a pretty big star if he got picked up by the right team. His lyrics are solid, his singing voice is extremely effective and, crucially, he has an excellent ear for a melody. He can carry whole songs by himself, and his contribution to “Strength In Numbers” might be secondary to Passion HiFi’s, but only just.

So, the bad news. Much as I absolutely hate having to focus on a negative, the blindingly obvious one is the MC that calls himself Switch. His inclusion on this album just isn’t warranted: his voice isn’t right, he has a poor staccato flow, the lyrics make little sense and there isn’t a single redeemable feature about his performance on “Strength In Numbers.” Again, I hate saying it â€“ because hey, he’s out there doing it, pouring his all into something he loves doing â€“ but he’s just nowhere near the quality level expected, debut or not. He will probably hate hearing these things, but any impartial reviewer would surely agree, and I’d love it if he proves me wrong in the future by transforming into a talented, charismatic MC. A rapper is only as good as his/her influences, and to be great it is necessary to study the greats appropriately, and then forge your own style and appeal. It also takes guts, resilience and practise to reach that higher level everyone is aiming for. My feeling is that this album probably just came a couple of years too early for him.

In conclusion, “Strength In Numbers” is an album that contains many merits, in particular the promising production from Passion HiFi, some lovely singing and MC-ing from Jon P, and, unfortunately, some substandard rapping from Switch. That still leaves plenty to recommend, and if Switch is prepared to really put his head down and work hard to improve, there is no reason why Hood Theory can’t go far. It does at times come across as the work of a small, underground debutant group â€“ hey, we’ve all been around them, it’s at least an interesting ride â€“ and their heart is in the right place. Next time round, they should open themselves up to some impartial criticism, and try to take constructive advice on board, not to heart. We all love hip hop, but great music isn’t made with love alone. It takes a fine balance of self-critique without destroying self-confidence.