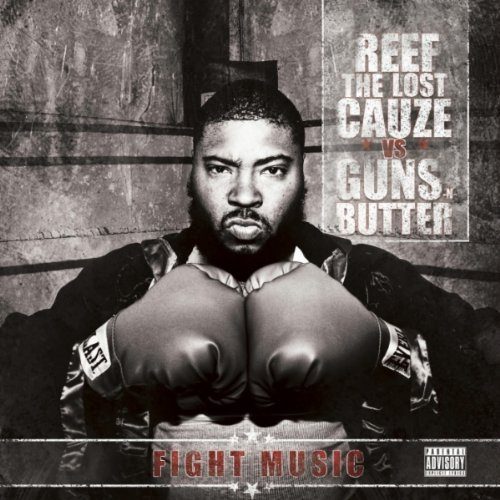 It’s good to know that some MC’s still consider themselves in the bout for world supremacy. Philadelphia’s Reef the Lost Cauze doesn’t put it exactly like that, but it’s clear to see that domination is part of his motivation. One need only consider the title of his latest, “Fight Music,” the collaboration effort with production team Guns-n-Butter. With “Fight Music,” Reef aligns himself with acts who combine the lyrical with the physical such as Sean Price, M.O.P., Torae, Ruste Juxx, Celph Titled, Vinnie Paz, etc. who all work hard against rap music going soft.

But beneath the tough exterior there lies a thoughtful mind:

“I ain’t pull up in a cake whip
I appeared in the mist, ridin’ on a slave ship
Docked at James River
where they used to hang and maim niggas
in the same picture they’d explain scriptures
Cocaine and liquor, I was born into a tenure, a fitna
Drug wars for 40 years – nobody richer
I had priors before Richard, bills before Cosby
It’s not comedy, I’m starving
I’m at your dance party, ice-griller
wonderin’ aloud, ‘What is wrong with these white children?’
This ain’t hipster rap, this that official vicious rap
by the aristocrat of rippin’ cats
[…]
Fuck the fame, see what the game did to Mike Tyson?
That nigga livin’ in a bus station
Then they got the nerve to wonder why I’m filled with such hatred
From where the bus fare raisin’ and we know how the dust tastin’
cause guns bust on every occasion
You speak of one nation, we don’t count as much
Chinamen make a thousand bucks for sellin’ the same amount of Dutch
Masters to young bastards who cut classes
tap asses, sling crack and get blasted
by someone they used to have class with
It’s not tragic, it’s a part of the package
over money that coulda been replaced
I know you read the news, my dude, but in all truth, do you see a face?
The one that looks like mine and got shot nine times
and he ain’t signed to Dr. Dre
and he’s dead and the brother who did it locked away”

After the plainly titled but lyrically ambitious “Intro,” the bell rings for the first of twelve rounds. “OPG Theme” seems to announce a Philly triumvirate that includes veteran Vinnie Paz and newcomer Burke The Jurke. They man a track by Stu Bangas, who provides a solid backing of a steady one-key piano chopped up by rock guitar blasts. Stu also produces “I’m a G,” whose bubble bounce is stirred up by cinematic horns while Reef hazards, “I’m the Cauze, the new Chuck D / Guns-n-Butter my Bomb Squad, nigga, duck these,” before rushing off to the next fighting metaphor: “Right now – put your fuckin’ mic down / Nobody wanna hear you, homie, wave the white towel / The fat bitch clearin’ her throat, so pipe down / when she sing I’m pullin’ that thing – lights out.”

Alternatively, he forms “the hood version of Black Star” with the suitably named Bloodsport on “Trigger Talk,” which samples from Xzibit’s classic “Paparazzi.” Never one to hide his light under a bushel, a Big Pun-channeling Cauze invites Kool G Rap and RA the Rugged Man for “Three Greats,” equipped by Stu Bangas with a loaded track heavy with cuts reminiscent of late ’90s underground hip-hop. The show of deference comes somewhat as a surprise if you paid attention to “Bosses,” where Akir, Reef and K-Beta more or less politely invite senior rappers and critics to retire. The until now AWOL Akir comes off strong, showing as much respect as possible while making his point, but K-Beta delivers the album’s surprise guest performance, a convincing combination of multi-syllabic rhyming, literary language and focused writing.

Reef himself shows off his range with tracks like the AOTP-ready “Cut U Up,” the J-Scrilla-laced “What We Rep” under whose dim glow Queensbridge’s Big Noyd feels perfectly at home, or “Get Me Outta Here,” another J-Scrilla production replete with quotables from Reef in his politically conscious mindstate:

“They don’t care at all, isn’t it obvious?
The world is run by crooks and gun-totin’ lobbyists
officials who fail to deliver on promises
Pay to play the only way they ever acknowledge this
Kids can’t afford colleges without scholarships
If you ain’t prominent you not the shit
Blue or white, life is determined by what color your collar is”

Two highlights come late in the album – “Lazy Sunday” is a loose collection of conversations, thoughts and actions occurring on a day off, the relaxed-reflective mood captured perfectly by Bangas on the musical side. “Sun” finally closes the album out on a peaceful note. Chop-La-Rok and J-Scrilla shine on the co-produced beat to which Reef writes a personal song that takes the term Fight Music to a level beyond rap battles and economic struggles.

Reef and Stu Bangas, J-Scrilla, and Chop-La-Rok (collectively known as Guns-n-Butter) prove to be a good combination of roughshod raps, inspiring rhymes and tried and true East Coast beats. Reef knows that rap works with moods and in most cases hits the right notes, not neglecting the lyrical aspect. “Fight Music” may not be a project that breaks any new ground, not for Reef the Lost Cauze and not for rap as a whole, but it is another substantial addition to the MC’s discography. As far as that world supremacy goes, however, Reef still has a few Rocky Steps to climb.