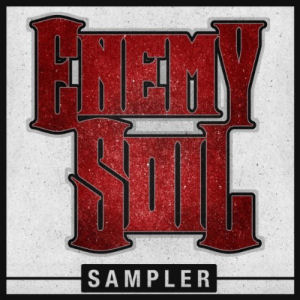 This is one of those “you’d be a fool to not take advantage of it” moments in hip-hop. If you’ve read our reviews of other Enemy Soil releases like “Heavy Metal Kings” and “Violence Begets Violence” and been interested but not felt like risking $5-$15 for a digital or physical CD, you have no excuse for not downloading the “Enemy Soil – Free Sampler” album fromAmazon.com

. It quite literally does what it says on the tin – this is a free sample of the different flavors that Enemy Soil has to offer, starting right away with the JMT song “Target Practice” produced by Hypnotist Beats.

Vinnie Paz: “All you muh’fuckers days is numbered
Attack the winter and I slay the summer
Pressure bust pipes God, I don’t pay the plumber
Y’all don’t put me to sleep, it’s more of a state of slumber
Pimp shit, smash skins like your favourite drummer
I’m a shooter and shooter do what a shooter please
A history of the broken land of the Sudanese
I spit a verse and a motherfuckin computer freeze
The right hand is a bomb, it’ll cost you two emcees
It’s suicide rapper you can han from Judas trees
We destroy and rebuild while y’all just shoot the breeze
Me and Buddha are separated by two degrees
The army gear is military and the boots are trees
The Kevlar isn’t a problem, I’ll just shoot his knees
I rock a Panerai watch, y’all are boostin tees
Dirty money on the block, I recoup with ease
Y’all can’t afford a sixteen, I’m chargin stupid fees”

Although I’m already familiar with many of the songs and artists on this release – Ill Bill,Outerspace and Reef the Lost Cauze among them, the simply named Dutch is something of a revelation to me. She’s on some Jules Verne shit with a song title like “2,000 Leagues Under My Keyboard,” the crooning is more suited to what you’d hear from Adele or Beth Gibbons. I might have thought it was a one-time experiment from the label, but her track “Just Before the Rain” is more of the same. It’s not an unwelcome sound – I like their mixture of her vocals with hip-hop style beats – it’s just not what I expected from a label known for post-apocalyptic songs from conspiracy theorist emcees. If there was only one reason to download this entire EP though it would be the dope DJ Kwestion produced “Drag You to Hell,” originally from “Season of the Assassin”:

If you already own everything here except for the Dutch tracks, which I imagine some underground hip-hop fans might, “Enemy Soil – Free Sampler” might be a waste of your time. Even if you already have half of these songs though, download it and get the other half. At $0.00 cost, what have you got to lose?