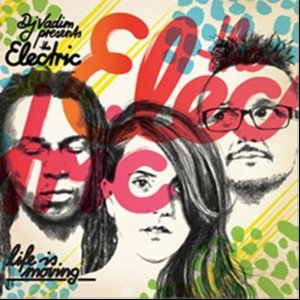 The Russian-born artist/producer DJ Vadim’s reputation is that of aeclectic and innovative musician not afraid to experiment with hip-hop sounds or merge them with other genres. It’s hard to imagine a situation where Vadim will either be satisfied that he’s found “it” and either stick to that one style for the rest of his life, or conclude that he’s peaked artistically and can’t create anything better or more interesting. Some people would be unsatisfied to be on a never-ending Quest like Tribe to create new music, but Vadim seems to thrive on this turmoil. In fact he conceived of the concept for his newest group The Electric while he was on tour in the U.S. and Europe promoting his LAST album. It was only a matter of time before he stopped moving long enough to put theory into practice and record his newest musical experiment.

So what exactly is The Electric? It’s a triumvirate that combines Chicago rapperPugs Atomz, UK songstress Sabira Jade and the instrumental/musical backdrop of “Daddy Vad” himself. The press release accompanying this album goes out of its way to point out the following: “This is more than just sick production, soul, broken beats or battle raps – more than just another ‘indie’ rap record or some passing star spangled new music fad.” DJ Vadim’s involvement makes that a given, but we’ll take the point they are making into consideration anyway. Quite simply they want you to turn your rap ears off when listening to this album. They’d much rather you listen to this album in the mindframe of jazz, funk, R&B, disco, dance and a little hip-hop thrown in for good measure. Think Soulquarians (Erykah Badu, ?uestlove, Mos Def, J Dilla etc.) from the early 21st century and you’re headed in the right direction. In fact songs like “Beautiful” give off a very Slum Village/Little Brother vibe:

“You’re beautiful, head to your cuticle
Eyes, your fingers, put this CD in your stereo
Usually in heels, or, whatever’s suitable
You’re always on the other, never on the usual
Give me 60 Minutes, ha, like channel two
No tellin what I’d do to you, no tellin what I’d do to you
My theme music swingin – like the little dudes
at the playground, sayin ‘Push me too’
Thinkin ’bout the day when I was like ‘Who is you?’
You was like ‘Who is me?’ I was like ‘Ask your dude’
Yeah a little cocky – but what’s a man to do?
And anyway, ha ha ha, you liked it too”

“Life Is Moving” is a trip, but it’s not a short flight. The album as it stands with this promo copy is 16 tracks and over an hour long, with all but three songs clocking in at longer than 3:30. Thankfully the time it takes to complete this journey is worth the investment. The whistling backdrop of “Life Is Moving” and guest vocals of Abstract Rude make for a mellow vibe – even DJ Vadim’s scratches seem to be letting out a long relaxed “ahhhh.” The electrified funk of “You Can Try” combines musical ideas from Gorillaz and Pharrell into a seamless whole. “The Way It Is” is a 9th Wonder track in all but name, and Sabira’s sultry voice fits it like a glove. It’s hard not to enjoy her even when she’s just going “la la la la” in outro to the harmonized and stripped down vibes of “Questions Questions.”

To be fair there are times when The Electric may be a little too eclectic for some. The techno-electric sound of “Let’s Celebrate” featuring Wes Restless is one such example, although in the context of hip-hop history it builds a bridge between the “Planet Rock” days gone by and modern rap music, plus it gives Sabira more of a chance to show off her soulful voice. The loping three time of “We Rollin” will definitely not be everybody’s cup of tea. And to be fair, even though I enjoy the elements of ATCQ that appear throughout this CD, it seems a little cheap for Sabira to start out copying “Stressed Out” at the beginning of “Hands Up,” and she seems to be trying too hard to get in touch with her Baduizm and ought to stick to her own natural vibe. This album is fun though – the bombastic hip-hop funk of “Overloaded,” the futuristic “Electric Company” showing what BEP could be if they didn’t suck, the deep bass and seductive party vibe of “I’m All In” and more. Electric turns out to be a good word for this latest DJ Vadim creation – sometimes it empowers you, sometimes it shocks you, and sometimes it’s a bit dangerous. We’re better off with The Electric’s “Life Is Moving” though – it shows that the future of the music industry is not as dark as it once seemed.