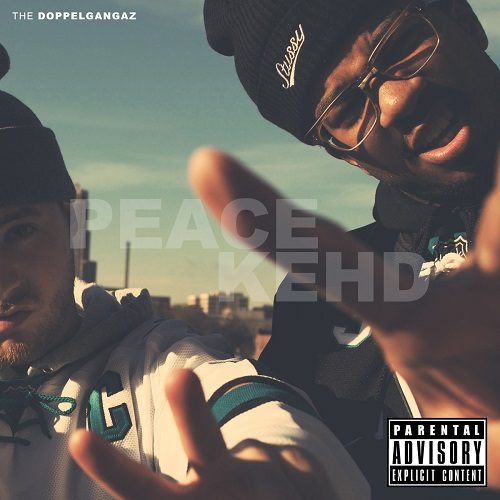 Hip hop is often susceptible to the mantra ‘too much of a good thing’. Annual installments in an artist’s discography has always baffled me, as nobody has ever released five dope albums in five years (hit me up if you can prove otherwise). The Doppelgangaz are a group that have generated a healthy buzz over the last few years, and it’s a shame to see their records starting to suffer from quantity over quality syndrome. I’m fully aware that the duo have a following that will lap up their latest record, but it could have been so much better. Let’s recap for a second.

The Doppelgangaz made a name with their album “Lone Sharks” back in 2011, a traditional, East Coast throwback record that stood out because of unique slang and impressive production. Their nomadic values has slowly built the guys a characteristic that separates them from numerous other similar styled duos (Epidemic, Tragic Allies). Given the duo’s penchant for self-producing their albums, they slipped some instrumental releases out before 2013’s “Hark” found its way in to rotation, but with 2014’s “Peace Kehd” showing signs of impending familiarity and a shorter collection of songs, could The Doppelgangaz be losing momentum?

It’s a tough question, because “Peace Kehd” certainly has its moments. “Knowntchootahlie” is a hypnotic head-nodder with a rare glimpse at melodic rhyming, while “Live Rugged” showcases a wackier side which whilst childish (talking about wiping back to front, from crack to cunt) – does prove entertaining (check the video). Fair play to Matter and EP, they have pushed themselves a little bit more here, but as far as the album overall goes – it’s a shade disappointing. Decreasing the number of tracks from 14, to 12 and now to 11 (including a few instrumentals in there) and it’s a slim album you’re working with. Much of it is enjoyable hip hop, but having followed the guys releases, it is underwhelming.

Despite my reluctance to splash the cash this time round, some of the best emcees in the game would do well to listen to this record, as Matter Ov Fact and EP both demonstrate their varied vocabulary throughout “Peace Kehd”. Rhyming ‘blue heather’ with ‘bruschetta’ shows they are far from typical rappers, but this does lead to some nonsensical verses, but it never stopped Ghostface or MF Doom from blessing beats, and when The Doppelgangaz get the formula right, it can make for some special music. “Holla x2” is arguably the best song here, and stands head and shoulders above the rest of the record thanks to the infectious ‘ella-ella’ effect coupled with a depressing piano loop.

Reminiscent of earlier productions that ingrained themselves in your sub-conscious (“Doppel Gospel”, “Barbiturates”), it’s a shame to report that these moments are too few and far between. Where “Peace Kehd” falters is in its sleepiness. “Sh*t Rock” is dangerously slow, perhaps aimed at stoners but does actually possess some fun flows from both members. The majority of “Peace Kehd” just doesn’t really take The Doppelgangaz anywhere different, and having blessed us with “Lone Sharks” and “Hark!”, “Peace Kehd” unfortunately finds itself third best, despite being a good example of The Doppelgangaz style.