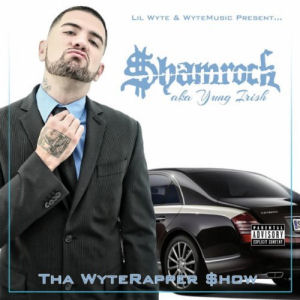 It’s been four years since Timothy Rasmussen a/k/a $hamrock won VH1’s “The (White) Rapper Show.” He got $100,000 to help launch his career, although on receiving his prize he announced his intentions to use the money to repay his friend Black Josh for paying his rent while he was on the show, taking care of his parents, and helping his sister with college tuition. That was and is noble of him (’nuff respect $ham) but his music career definitely stalled while he was helping out his fam. In fact despite the fact winning the show gave him a visibility and notability most rappers would kill for, his name evaporated to the degree that when you try to Wiki search, you get redirected to a page about the reality show he was on. Even though they’ve got some funny ideas about who and what should be notable, in this case it might actually be fair. He dropped one album called “Worst 2 First

” in 2009 on G.E. Entertainment as a download only… and that’s about it. Whatever he’s been doing, it hasn’t been in the mainstream music spotlight.

2011 is the year $hamrock looks to change that, and he may have found the ideal partner to help him do it – Hypnotize Minds alum Lil Wyte, the self-described “Bad Influence” in hip-hop. There’s a certain natural camaraderie there given that both are white rappers who come from well known Southern rap scenes: Wyte is North Memphis, TN and $hamrock hails from Decatur, GA. Wyte of course earned his claim to fame by being the only white boy hardcore enough to get a stamp of approval from Three 6 Mafia, and thanks to their large and loyal fanbase his name has stayed bubbling as a soloist over the years. Wyte has now franchised that fame with his own record label, signing other rappers to his Wyte Music Records to give them the same break he once got from Three 6. Now $hamrock might not need that break since he already got the biggest break anybody could thanks to the ratings “The (White) Rapper Show” delivered, yet he’s smart and humble enough to know signing with someone who has already been a success in the industry can relaunch his career and take him to the next level thanks to increased exposure. With that in mind, Wyte and $hamrock used a play on words to put out “Tha WyteRapper $how.”

Now if that was the end of the story, $hamrock would go down as one of the greatest comebacks in the history of hip-hop – mainstream fame to no name to record label re-debut to adoring fans worldwide. Real life doesn’t always end like a feel good Hollywood movie though, and there are some problems with “Tha WyteRapper Show” that simply can’t be overlooked. The first problem is the production, which could be called monotonous, except that description would be a fairly gross understatement. It’s not that $hamrock doesn’t work with a diversity of producers looking for the right sound, it’s that none of those producers ever find it. Amber Cheri tries to strike a balance between Paul Wall and Ke$ha on “Name In Lights,” and even sings the hook to help it out, but the tune for the melody isn’t catchy and neither is the chorus. Ribah On The Beat tries to give $ham a somber keyboard feel for “Penitentiary,” but there are too few notes in it and they repeat too frequently. Juney Boomdata tries that Soulja Boy/Gucci Mane sound on “Big $tacks” and he too tries to help out with a cameo on his own beat. Neither helps. How does Crazy Mike fare on “Round Tha Corna” featuring Lil Wyte and Partee? No better. A rare track that works perfectly is Lune Tunez-N-Yo Area, lacing “Count Your Money”:

“I ain’t a new jack, I’m a vet to the game
Cause I learned the same just like I learned the slang
All I need is a lo-fi speaker to bang
a good microphone and I can do my thang
Yeah I’m on top, I’m the one they gon’ jock
cause I stay so fresh in my Polo socks
like I’m doin flip-flops, all white tank top
And I just seen a Gucci hat I wanna go cop
I count that money every day and every night
And I never let my shoebox out of my sight
I been broke befo’ but that’ll never be right
It’s your boy $hamrock so I gotta keep it tight
It’s that flow that you can’t deny
Cause when I hit that verse I’m fin’ to +Hypnotize+
I’m fin’ to spit that fire in every line I write
You can +Doubt Me Now+ like my name was Lil Wyte”

When $hamrock gets a beat that presents him in the right light, his vocal presence is that of a more dusty Paul Wall, yet somehow yielding slightly less charisma than his counterpart. The irony is that $ham won the VH1 show by showing MORE charisma than his fellow finalist John Brown, who had better lyrics but a far less likable personality and vastly inferior stage presence to boot. I suspect the change here is the amount of pressure $hamrock feels to create a winning album and be taken seriously both in hip-hop generally and the music industry specifically. “VH1, that’s a hell of a plug, but it’s Wyte Music that showed me love” quips $ham on “Name In Lights.” Given that’s true, Wyte should have suggested he take it up a notch, since one of the reasons Wyte stood out as a hip-hop artist rocking with Three 6 Mafia was his unapologetically aggressive attitude and flow, and since he cameos on “Name In Lights” he unintentionally shows up his new signee with both of those traits.

There are songs that work well out of the 13 tracks on “Tha WyteRapper $how,” but the problem is they are too few and far between. Luney Tunez produces another winner for $ham on “5 to 10” which features a cameo from the Crime Mob. Ribah redeems himself with the sparkling backdrop of “Top Notch,” which is also helped out by a choice sample of Pimp C. (R.I.P.) Lil Jay’s whining synths and whistling backdrop on “Str8 From Tha Dec” are effective, and the stripped down bass and finger snap behind $ham lyrically clearly inspired him to show off more of his personality. Personality is what lacks the most in “Tha WyteRapper $how” lyrically and musically, an album I genuinely wanted to like a whole lot more but just couldn’t get into that much. We’ve yet to hear $hamrock’s best work.