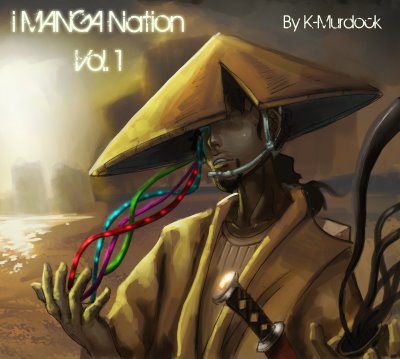 Those who have been paying attention to my writing over the long haul here atRapReviews may have gleaned that I like anime. If you didn’t catch it from sampling my writtens before 2006, my review of Samurai Champloo’s “Music Record Katana” would certainly have given it away. It’s a habit I picked up in college over a decade ago that I just haven’t been able to shake. To be fair there are plenty of animators around the world doing creative and innovative things outside of Japan, but there’s not a manga culture in many of those places which spawns the animation Japan does. For the unfamiliar, manga could be poorly summarized as “comic pulp.” They may be the work of a single cartoonist who is already widely published serialized in a book form, or they may be wholly original in content, but either way they are a cheap and popular way to disseminate the art and stories of very talented people. In the same way that the popularity of Superman comics led to the creation of cartoons, movies, TV shows and a line of collectibles, manga have the same effect in Japan. Chances are if you’ve seen any anime at all, whether on [adult swim]or Ani-Monday or elsewhere, it was based on a manga popular enough to spin off an animated series and a slew of merchandise.

Now here’s where I confess to not being a very hardcore Japanophile – I don’t buy a lot of manga. It’s not that I have anything against the format. Most “authentic” manga even when translated into english are meant to be read from the back to the front, right to left, something many Westerners have trouble with since we are taught the exact opposite way to read growing up. I’m fine with this format, and since manga have more in common with comics than traditional books, it’s not hard to unlearn what you already know – you just follow the illustrated action as it occurs. My real problem is that I got started with anime first, never realizing the manga roots it had, and to this day my gaijin ass still says “man-jah” as though the word was Italian (in Japanese the “ga” is a hard syllable). Unintentionally I learned that any manga that was good would eventually be animated, so why not just wait for the anime? Why spend $7-$15 apiece on the books? Furthermore there’s a bit of manga culture that’s too nerdy even for me, and that’s the people who obsess over the differences between manga and anime version of the same story. It’s good enough for me to KNOW there’s a difference between the two version of Full Metal Alchemist or Trigun without having to choose sides over which is BETTER. By not reading the manga I can be somewhat “blissfully ignorant” and not let it bother me that a character in anime doesn’t act how he or she should act based on the manga. I pick up a book now and then out of curiosity but that’s about it.

What’s the point of this overly long introduction? I assure you it’s not to annoy you. I’m trying to give you a little background on why Panacea, would release an album titled “i-MANGA-Nation Vol. 1” for free online. The first reason is very simple – Murdock is an anime fan and not the least bit shy about it. In fact a few years ago Murdock flipped up some clips from Naruto on his official MySpace and got such a positive reaction to it that he decided to go ahead and put together a full album. The second reason is that as a true head Murdock is acknowledging the roots of anime, but in doing so he’s also drawing a parallel to what he’s doing as a producer. The people who spend so much time in online forums complaining that anime are not faithful to the manga they’re based on miss something essential – animeREMIXES manga. Anime takes that manga, flips it up, and converts it into a mainstream TV format. “i-MANGA-Nation” is no different. K-Murdock is taking audio clips from shows like Samurai Champloo, Naruto, Bleach and Fist of the North Star and remixing them for a hip-hop audience. It’s probably not a coincidence that Murdock chooses to sample from a lot of bloody, violent or confrontational scenes – no doubt easier for an audience weaned off gangster movies, TV shows like A-Team and Knight Rider, hardcore Wu-Tang songs and the like. For those not familiar with anime, these remixes are a perfect start – Murdock’s unique Neosonic beats and the dialogue from the shows as the “rhymes” without the cheesy (but enjoyable) overdub of 70’s Kung-Fu flicks. This is clear english dialogue ripped right from the American anime releases.

Musically the album is just about everything I could like – it’s a little bit MF Doom (see “Flying Free” and “A Journey’s End” – perhaps “Star Stories” too), a little bit RZA (see “The Tale of the Princess” and “Razor’s Tongue” – perhaps “FOTNS!” as well) and a little bit Primo (see “Ronins”) and Kanye West (see “Invisible Seas”) as well. That’s unfair though, because K-Murdock has a very unique sensibility to his beats gleaned from his years of hip-hop production for Panacea and others that’s all his own. Perhaps it would be better to say that THEY sound like him instead of the other way around. In a sense though K-Murdock is remixing the music as much as he is the dialogue, taking a whole range of hip-hop styles that work, and incorporating them into a soundtrack of anime appreciation the likes of which has never been done before. It’s fair to say no one else will even come close to making something like this, not without the same amount of love for Japanese style and Western hip-hop that K-Murdock has. Some may try but the results will undoubtedly be inferior andCERTAINLY won’t be free. FREE. Sleep if you want but you can try “i-MANGA-Nation Vol. 1” without it costing you a dime – so really, what are you waiting for?