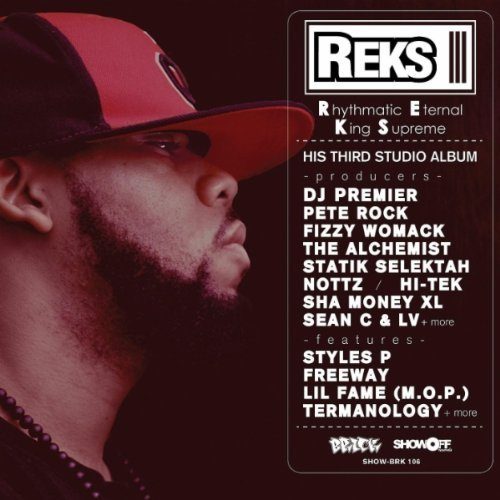 If 40 is the new 30 then 30 must be the new 20, because at 33 years old Reks still sounds like he was born yesterday. After ten years strong in hip-hop he seems to only get better with age, although some may have thought he peaked in 2008 with the critically acclaimed “Grey Hairs.” Not so. Quietly behind the scenes Reks was working on his next big release, dropping “More Grey Hairs” in the interim to appease the fans who wanted more. What is it about Reks that creates that demand though? Well for one this Boston based rapper has a witty delivery that mocks the conventions of rap music while at the same time celebrating the art of creating hip-hop classics. On the Blaze P produced song “The Underdog,” Reks uses the hook to sardonically call himself “the greatest rapper no one heard about,” then goes on to prove it might be true:

“You see, all of my life I’ve been considered as the worst
Lyin to my momma, even stealin out her purse
Even worse I was, birthed in dirt, immersed in rotten
Best believe Corey was a problem
Trapped by them street designs, tryin to find a sign to read
World mind, murdered line for line at shows, climbed to dope
Boston elite polls, but universally, nobody heard of me
The poems in me, told me I was born to be
Big, Nas, Jay, debaters say that I’m gassed, ego inflated
Made it my mission to silence ’em, deaf blind and I’m not, aided
by improper ear, what they hear, from the radio
See from the video, Waka Flocka’s silly flow
Underdog killin those, silicon fakers
I do this for the DJ, do it for the breakers”

Then on the Sean C and LV produced “Kill Em” he mocks the idea that rappers have to figuratively slay their competition, and in the process manages to name check a lot of his fellow “underdogs” that he respects:

“(Dead!) Off with these rappers’ heads
Termanology – DEAD; Skyzoo – DEAD
Slaughterhouse, talkin ’bout, how my eyes see RED
Why live? Let them die, I kill ’em, willing
Try feeling sympathetic for Blu, like poor Blu
Pour you, a cup of acid, drink splashin
Think as if killin rappers is so fantastic
Statik hurry let’s get this track mastered fast kid
Murder he wrote, leavin they throat slash, it’s
mad sick, I fuckin hate dope rappers!
If you ain’t made it big, I’m killin you, ridicule
anyone without whips and bitches in their videos
Little Brother – DEAD; Elzhi – DEAD
Slaughterhouse, talkin’ bout, how my eyes see RED
I is, sick in the brain, R-E-Cocaine-Kid
Had a talk with my conscience my conscience said
‘Reks kill ’em kill ’em kill ’em!'”

I’m a sucker for harps in hip-hop beats, but Reks wrecks the best one that I’ve heard since PaceWon had rap “Locked” while simultaneously threatening to blast Torae with his own double barrel while asking the question on a lot of hip-hop fans minds: “I wonder if Jean Grae would let me sit on top of her?” That’s Reks. He’s a fan of double entendre, stringing together multiple rhymes over interlaced lines, and weaving complex concepts that leave your head spinning nauseous. To call him “talented” would at the least be an understatement, and when you pair that talent with the producers assembled on “Rhythmatic Eternal King Supreme” it’s truly a sight for your ears to behold. It’s an all-star cast providing the Reks megablast, not the least of which is DJ Premier on the opener “25th Hour” which rocks an ideally chosen Nas sample on the hook – “no time for looking back it’s done.” Peep the verbals:

“I’ma write this here rhyme like Guru’s in the passenger
Standin on the East coast, starin out to Africa
Accolades, Escalades fade
My vernacular remain in tact for the generation that’s comin after
The average rapper you praise days numbered like a calendar
Challengers caliber mediocre enter the catheter
IV’s, wrap ’em up, mad as fuck, need a ladder up
Escalator, elevator, skyscraper, hella haters
On Primo beats, meditate a bit to elevate my spit
Scribble daily scripts, hell in wit
Angels I strangle the instrument mangle chop can’t go pop
I gotta remain boom bap, true dat, who dat be?
Mr. ‘Say Goodnight,’ I’ma blaze the mic willingly
Kill or be killed industry, and the realest of the real emcees
Solo flow enemy, future of the rap
Golden Era dead (no time for looking back it’s done)”

Cold chills down my spine with each line. The intensity with which Reks flows over Primo’s beat is a cold chiller thriller and even though he’s no murderer what he does with these bars is definitely killer. If “25th Hour” were the only example of his menacing superbly constructed flow you could buy the album and go home happy, but Reks wrecks this album again and again. Pete Rock gets minimalistic for the intense “Thin Line,” Nottz bangs out the pianos for the amusing “Limelight” where Reks asks “Nicki to Minaj me quickly” then blasts know-nots with the line “You ain’t heard of Rakim – please tell me how come?” The old school R&B soul of “This or That” may make you think you’re listening to a Jay-Z rap on a Just Blaze track, but it’s Reks ripping to Statik Selektah. From the wailing liftoff of Alchemist on “Why Cry” featuring Styles P to the understated electronic Hi-Tek style of “The Wonder Years” to the soulful Fizzy Womack track for “Cigarettes,” each song on “R.E.K.S.” comes correct.

It’s often been said, particularly on this website, that rappers from Boston or the surrounding Boston area don’t get an equal amount of recognition and exposure compared to their counterparts from New York City. “Rhythmatic Eternal King Supreme” is thus in many ways a landmark game changing moment. It’s built on the foundation of great men like Edo.G and Guru who came before Reks, but will take the respect Boston gets as a hip-hop mecca to a whole new level.