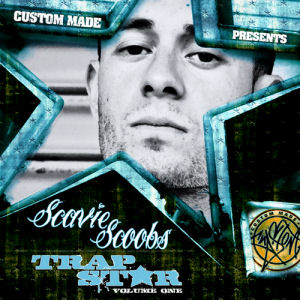 The Los Angeles collective Custom Made has been putting out albums and mixtapes since 2002, and we’ve been covering their efforts since 2004’s “L.A. State of Mind.” They’ve had more than their fair share of trials and tribulations in that time. Some members of the crew got sent up the river, while others move outside of L.A. and fell out. When they finally got mainstream distribution via Babygrande’s release of “Original Dynasty” the deal fell apart due to the all too typical #4,080 syndrome and they wound up independent again. Through it all three members stuck together and stayed on their grind – Bluff, Element and Scavie Scoobs. Now in 2011 Custom Made’s remaining trio are on their grind through both mainstream distribution of “Hi-Def” and solo albums like Scavie Scoob’s “Trap Star Volume One” for their loyal fans.

“I’m in that city where them guns bursts
L.A., you know I had to rep it for my thugs first
Bad bitches, big money got my squad cursed
Drug sales hit, got ’em fiendin cause we bloodthirst
You gotta give me mine, cause I redefine
thug shit, we livin in a different time
Fuckin livin poor, if you ain’t gettin yours
You better hit the floor, even if it’s pitchin raw”

“Gangsta Shit” does a good job of summing up Custom Made generally, Scavie Scoobs specifically and “Trap Star Volume One” exactly. Even though “trapping” is something that’s more generally associated with Southern locales like Houston and Atlanta, guest star Supa Sonic describes himself and his rhyme partner Scoobs as “trappin on Crenshaw, trappin off Peachtree/and just like them white +Boys+ I’m feelin kinda +Beastie+.” Pharmaceutical raps have been prevalent from West to East for a long time now, but Scavie’s flow and his pronouncement “the rap game slow/so I gotta get that dough” lend credence to the topic as do the fact former Custom Made members are currently incarcerated. Understand we’re not saying there’s a one-to-one correlation to Scoobs living how he talks, but how many bids has Gucci Mane done by now? He talks more about trapping than anyone in hip-hop.

Given the recreationally medicinal sales game is not exactly a new subject for rap stars, it’s up to the personality of Scoobs and the production of his tracks to take things to the next level. Let’s start with the latter. There are a wide variety of musical contributors who each do their things for Scoobs effectively. Tone Hookz gives “Bigg Bad Wolf” that big bopping sound heard on so many E-40 tracks by Rick Rock. Frank Dukes likes a sparkling waterfall of sound to splash on his instrumentals and “Highway Muzik” is no exception, although it’s also got a good bass kick. Ressa Exxel tinkles the ivories and ties it together with riffs and a simple but hard drum track on “No Drama.” The simply titled “Gold” features a perfect 8Ball sample, a harmonized (and slightly eerie) chorus, and dramatic cinematic overtones for Scoobs to drop bars on. Abstrakt Soundz is a frequent contributor, and he does nice work on the Custom Made group tracks “You Can Find Me” and “Hang Here” featuring Scooby Doo’s crew. They even make the same joke I just did on the Abstrakt produced track “Scooby’z Anthem.” You’ll also hear Element dropping a very Kanye-esque beat on the closer “These Dayz.”

After a ten year run in the rap game and a couple of flirtations with getting full blown major distribution, it’s really not surprising that Custom Made has their sound locked down whether as a group or solo. Now as for the bars, Scoobs is arguably not the strongest member of the clique. “Who the hell is Scoobs? Better ask your hoe/And if the bitch can’t tell you, better study my flow.” So I studied. After 15 songs the conclusion is the same going out that I had coming in – Scoobs raps about his hustle constantly, sometimes the hip-hop one, but more often the one that would land him in prison taken verbatim. Now to some degree he can pull this off because he’s playing his position and not trying to be a tongue twisting rapper or a lyrical intellectual kingpin. He’s telling stories at a measured paced which doesn’t cause his flow to break down or fall apart, and the diction makes each word crispy clear over these quality beats. You can’t call the topic matter original, but you also can’t call the way he does it faulty or flawed. In the end “Trap Star Volume One” is an album that rides on its beats and is helped by a slew of cameos from Scoobs’ family and friends, and for any Custom Made fan this one will fit perfectly into their catalogue.