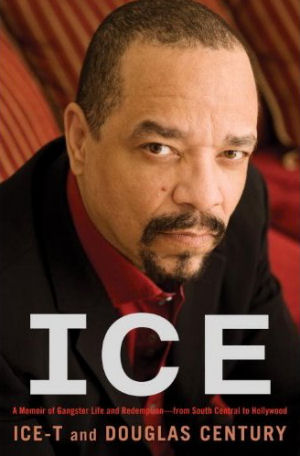 Douglas Century and Ice-T :: Ice: A Memoir of Gangster Life and Redemption

Ice-T’s first foray into the literary world, 1994’s “The Ice Opinion,” was a collection of essays offering his unsolicited opinions on everything from police brutality to Bryant Gumbel. His latest effort, Ice, should find a wider readership as it operates as a more conventional autobiography.

The O.G. born Tracy Marrow has been a bona fide media superstar for upwards of two decades, making his fortune with a diverse portfolio including music, film, television, and business ventures. He’ll forever be known first as a rapper, though, for his pioneering of the West Coast style and influential catalog blazing trails for gangsta rap and even rap-rock fusion. Today I find he has a somewhat peculiar status in the rap game, having attained the infamy of LL Cool J and Ice Cube for his acting and endeavors apart from music, yet despite countless hours of “Law & Order: S.V.U.” viewing and ogling at his live-in girlfriend’s silicone chest, most folks my age wouldn’t know “O.G. Original Gangster” from “O.C.: Orange County.” Ice fills in the gaps for the older generation who grew up with his timeless music and for the younger fans who know him best as Detective Tutuola.

Ice is marked by a blunt, crude literary style. Throughout the entire book I couldn’t help but imagine Ice-T’s inimitable voice and enunciation narrating the passages. His take on the funeral atmosphere in the opening chapter provides a representative sample of the insight and language found throughout Ice:

“Even today, I don’t dig the whole scene of a funeral. Funerals are ugly. I never go to them. I’d much rather remember the person alive. I don’t want to see anybody lying in a box.”

Ice-T was born the only son of a working-class couple in suburban Summit, New Jersey, and came of age in a tough love household. Ice recalls, “It was quiet, simple, and suburban. An almost perfect childhood—except, for me, every couple years, losing a parent…” Indeed, Ice had lost both of his parents to heart attacks before he was a teenager, at which point he was shuttled across the country to relatives in Los Angeles, thrusting him into the burgeoning West Coast environment of gang warfare and crime.

I found interesting the amount of attention devoted to events and episodes that I would expect to be significant in relation to others. Ice recounts his entire childhood in the space of about twenty pages but goes to great length to describe the hostile gang environment of 1970s Los Angeles right down to individual blocks, and his take on the pimping game comprises a long break in the narrative. I was similarly surprised that his seminal albums “Power” and “O.G. Original Gangster,” both classics of the genre, were each mentioned only once in passing, whereas an entire chapter is devoted to the formation of his heavy metal group Body Count and the subsequent tours and controversies that made headlines throughout the early 1990s. In comparison to his solo masterpieces from the late ‘80s and early ‘90s, I tend to consider Body Count somewhat of a self-indulgent side project, but it’s clear that Ice believes it is an essential piece of his catalog and legacy.

The core of Ice is fairly predictable to anyone remotely familiar with Ice-T’s career as a performer. He recounts his experiences as a musician coming to prominence in a growing genre and his encounters with rap pioneers such as Afrika Islam and Grandmaster Caz. He describes his introduction into film via “New Jack City” and how he parlayed his first performances into a lucrative career. Unfortunately, he also uses parts of Ice in his own defense, attempting to justify long-buried headlines such as a violent altercation with a fan in Italy, the infamous “Cop Killer” debacle, and his son’s run-ins with the law in high school.

The most compelling passages of Ice detail his days as a wayward young adult, beginning with his time at Crenshaw High School. During Ice’s high school career, the halls of Crenshaw High were disputed territory for the upstart gangs that would run street life within a few short years. His recollections of muscle-bound gangsters roaming the halls of his high school and giving him cautionary bruises in the weight room almost romanticize a more innocent gang atmosphere before drive-by shootings became daily events. Faced with slim financial prospects as a young father and little support from family figures, Ice joined the military for a few tumultuous years during which he received extensive combat training which he later parlayed into a criminal lifestyle once he returned to L.A. It was during his time in the military that he also became fascinated with the pimping game, which even became the source of his stage name: constantly reciting the Iceberg Slim books he read in his free time, a friend would say to him, “Kick some of that shit by Ice, T.”

His deliberations on the pimp game provide the most thought-provoking passages of the book. For the uninitiated, Ice breaks down the world’s second-oldest profession in a way that’s not only inoffensive, but actually insightful and relatable. He likens any occupation which involves bringing profits to an employer, or “legal hustle,” to the pimp game, even his work in Hollywood for NBC producer Dick Wolf:

“Sometimes you’re lucky. You’ve got a good pimp. Dick Wolf is cool; he don’t whoop me. But don’t get it twisted. Don’t mistake what it really is—ever. If you’re not bringin’ home the lion’s share of the check, in a sense, you’re hoin’. The key thing is that you don’t mistake pimpin’ for hoin’. When you’re hoin’ know that you hoin’.”

His tales of robbing malls and jewelry stores are also riveting and could have come from any desperate black man in California during the 1970s and ‘80s. Ice-T built his first small fortune as a prolific retail thief, but turned to rapping after a car accident robbed him physically of his getaway capacities.

Ice never looks like a saint in his autobiography, and some elements leave a bad taste in the reader’s mouth. His children are born, and this is the last we hear of them. He admits to not spending much time with his kids but expresses little regret. Each of his women has “a round, fat ass, just like I like.” In these instances and many others, the honest frankness that proved so effective in his raps does him few favors as an author.

Ice revisits his recent feud with Soulja Boy and comes off looking like a hypocrite. Based on his own accounts of his getting into the rap game, the two stars actually had very similar aims in their early music: to explore a new art form, vent some self-expression, but most of all, to make some money. Ice is never holier-than-thou in his values, and growing up a hustler, his primary ambition above all else was to make money. Some might see this as shallow, but this same approach was carried into his earliest recordings as he sought the “Power” he notoriously rapped about. His raps contained his unfiltered observations of life on the street and his own experiences in his criminal past. It isn’t until he addresses the Soulja Boy episode that he even mentions his disapproval of today’s rap scene, reminiscing over the better days of Eric B & Rakim, Big Daddy Kane, and Grandmaster Flash, when in reality even his own accounts of his younger days cast him as an artist surprisingly similar to his teenage target: young, broke, and fortunate enough to score a record deal.

The book’s final portion consists of very clichéd motivational material as Ice offers the reader advice on how to achieve their goals. While he has every right to be pleased with his fortune, it doesn’t make him a great motivational writer. Those who picked up the book to learn about the man behind “O.G. Original Gangster” and “Cop Killer,” which will ostensibly be most of Ice’s audience, will be quick to skip these passages.

Ice is frequently a compelling read and goes fairly quickly, especially during the portions in which Ice recounts his lesser-known exploits as a young man or offers commentary on subjects with which he has extensive knowledge and experience. However, fans of his music will find that it often comes up short on insight and depth in areas they might hope to learn more about the man who created such timeless and influential rap. That said, some of his listeners may want to hold off until it comes out in paperback.