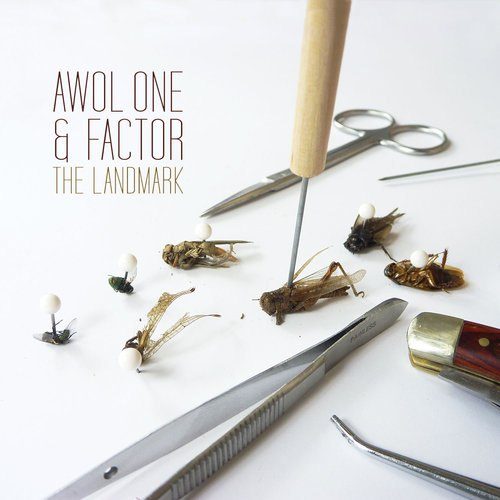 Awol One may be one of the most divisive rappers out today – not just amongst underground hip-hop fans but amongst the RapReviews staff. A wide array of writers for this website have tackled his music, and each came to a different conclusion about his skills. Pedro Hernandez said “Anyone with an affinity for good music and original concepts should be happy with what Awol One cooks up.” Andrew Matson wrote “Awol One could have been an intriguing example of the many ways to interpret life, hip-hop, and the combination of both (but is) maddeningly frustrating.” Arthur Gailes may have had the most scathing critique: “If you don’t enjoy AWOL One, and few people will, stay FAR away.” Bringing it full circle my own assessment back in 2001 is much closer to Pedro’s: “Awol may not be everyone’s cup of tea, but (he’s) for people who like left of center topic matter that’s not about drinking Cristal or driving a Bentley.”

The one fair conclusion one can draw from Awol One reviews over the last ten years is that there’s very little middle ground – critics and listeners alike seem to think he’s either brilliant or boring. The curious thing about his latest collaboration with Canadian producer Factor is that it’s neither. “The Landmark” might actually be one for striking a rare balance for Awol between arthouse and accessibility. It’s easy to envision that “People On Drugs” was written about rock ‘n roll/Hollywood excess. The protagonist proudly boasts that he’s “driving drunk/driving fucking wasted” and that he “forgot what I did last night.” Charlie Sheen, anyone?

There’s no question that Awol One’s flow puts the UN in unconventional. At times his raspy voice barely rises above a whisper. He’s more likely to remind you of Vanilla Ice than Ice Cube, but that’s only if Robert Van Winkle spent the last twenty years chugging vodka by the gallon while smoking Fidel Castro’s finest cigars. It probably doesn’t help matters that Awol has a tendency to sing at times. If you ever wanted to prove the theorem that some people are born only to rap and not croon, well, he’d be the ideal case. The difficulty here is that he’s so bad at it it’s actually somewhat charming – not unlike a genetic experiment gone awry splicing Biz Markie and Everlast together to create a pop star. As such you can find yourself nodding your head and tapping your feet to the folk pop hip-hop stylings of “Rewind Yourself” with no guilt. Awol One might be the only man alive today who can pull it off.

The one thing that will probably put off newcomers to Awol One’s style is that he’s unrepentantly dark and brooding. He’s hip-hop, but he’s the kind of hip-hop that likes to pull wings off insects and then pin them into a collection. Even when he’s melancholic though, he’s braggadocious. It’s the kind of contradiction that will confuse many listeners on songs like “Coming to Town” where he simultaneously sounds sad and egotistical:

There are some songs that even the admittedly odd Awol One probably should have rethought. “Perfect Opposites” is one long cliche based on its title, and the singing is not so charming on this one. “Lonely Again” relies heavily on modulation and a vast empty expanse of echoing drumbeats that Awol’s voice simply can’t fill. The good songs outnumber the bad though. Eclectic meets eccentric when Awol teams with Moka Only over a smooth flowing guitar melody on “The Wasp.” “Recognize Your Frienemies” is East meets West meets up-tempo hip-hop, and features the strongest and most traditionally hip-hop flow found on this album. “Daze Go Bye” featuring Buck 65 pounds a harrowing beat into the dust as two of rap’s most unconventional and dire try to one up (or in this case one down) each other. “One Live Tape” is a genuinely fun throwback to the 1990’s where the letter A reigns supreme thanks to Abstract Rude and Ahmad. “The Landmark” will challenge many listeners, but in my eyes Awol One has created an album that will make even his most ardent critics give him one more chance.