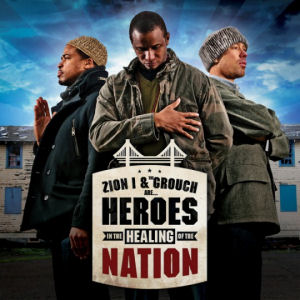 Zion I & The Grouch :: Heroes in the Healing of the Nation

Zion I. Collectively the union of Zumbi (formerly Zion) on the mic and AmpLive on the boards and decks. Highly critically acclaimed. The Grouch. Three decade representer of West coast hip-hop. Living Legends member. Prolific artist with over a dozen solo albums and at least half as many more in collaboration. One of those collaborations occurred back in 2006, when all of the artists named in this paragraph declared themselves “Heroes” of Oakland, California and in the process brought a renewed spiritual and physical energy to the scene as well as the larger hip-hop diaspora.

Any time you do a critically acclaimed collaboration you run the risk of disappointing your loyal fans if you don’t do it again, and you run the risk of disappointing them even more if you DO and it doesn’t live up to expectations. Happily both The Grouch and Zumbi have mas cajones than the average rapper, and if you’re familiar with AmpLive’s production style you know he doesn’t rely on the same old humdrum samples and styles as every other beat maestro. Often when listening to the music that these artists produce, you feel like it’s actually PRODUCE, as in food from the supermarket meant to feed your soul. Their songs aren’t so much created as they are grown, and “Heroes in the Healing of the Nation” is another outstanding collaboration highlighting their organic approach – even as they make fun of taking going green too far on “I Used to Be a Vegan”:

The Grouch: “Blueberry Pom, goji acai drinks
Do they give you energy, or just make your pee stink?
Boy, you could be unhealthy off soy
if it’s GMO’d out or fried to enjoy
Eatin good’s a lifestyle baby
If you think I ain’t into livin it you’re crazy
Got my glass water bottle, plastic leaches
With coconuts stacked and I’m back to the beaches
Yoga on Mondays, massage is good healin
Cause it’s mind, body, soul you feel me?
Ain’t been to Mickey D’s since Kaplan was on fry
Don’t believe what the FDA say, they lie!”

Zumbi: “I used to be vegan, but I missed mozzarella
My diet real strange but I’m a real healthy fella
No, swine on my mind, I heard that’ll kill you
Cause foods alter moods I had to stop eating Jello
Yellow #5, #6, they preservatives
I even cut bean bread, meat made me murderous
Too conservative, living off herbs
Fruits, vegetables, I learned roots
Cayenne, ginger, a side shot of garlic
Walk around town breath smell like a toilet
He said he vegetarian but now he eatin chili
With a hot link sausage – c’mon homey, really?”

The Grouch and Zumbi take a lighthearted approach to even serious issues, but that doesn’t mean their writtens and their flows aren’t seriously well put together. You couldn’t call it flawless because that would be a gross overstatement, but if you said it was hard to find the flaws in it that might be a slight understatement. It’s incredibly refreshing to see the team go one step beyond sampling from a classic Roy Ayers record and actually have him ON the record on “Be a Father to Your Child,” as worthy a successor to the Edo.G original as anything to come along in the last 20 years:

Zumbi: “It only took you three minutes to make the baby
It was all about you, must be crazy
Forgettin while you hittin it’s a sacred act
At least have the decency to keep it shrinkwrapped
A slap to the ego, this one’s for them
Many men can’t comprehend the extent
of responsibility, you too content
It’s a job being daddy, this is no pretend”

The Grouch: “Be a father, if not, why bother?
Don’t let down your sons, raise your daughters
You don’t want to have to regret it, later
and think about the years you missed, being afraid
to just face the greatest gift you ever gave
or ever given you cause you wasn’t that brave
to grow into the man you were supposed to become
and show up for your fam – damn, that’s dumb
So many problems, so many excuses
None good enough to neglect the youth”

There are many emcees who would come off preachy with this kind of “Healing,” but neither Grouch nor Zumbi are pushing anything but the truth. Sometimes the truth hurts, but it also leads you to right and correct ways of thinking that will make your life better, so a little pain gets a lot of gain. There’s nothing painful about the collaborations on “Healing of the Nation” though. Casual and Fashawn both come on to “Plead the Fifth.” Freeway spits frantic Philly flows all over “Victorious People.” Brother Ali accepts the “Invitation” to drop rhymes for the nation and blends in perfectly. The collabos are carefully chosen to fit the format and theme of their album. That’s not to say anyone involved is knocking Drake, Nicki Minaj or Jay Electronica, but it is to say that getting the flavor right is more important than getting the flavor of the minute to drop 16 bars.

“Heroes in the Healing of the Nation” has a timeless quality, one that makes radically different sounding songs like the bass heavy “Drop It On the 1” and the light and Carribean influenced “Journey to Forever” with Mystic fit together seamlessly. The Grouch & Zion I are serious about their craft, but this album is seriously fun. They may not work together every time out, but when they do it’s a natural fit and a surefire hit.

Zion I & The Grouch :: Heroes in the Healing of the Nation
8.5Overall Score
Music8.5
Lyrics8.5