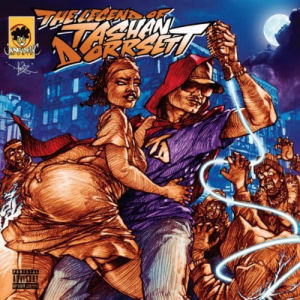 “Legend” is such a small word compared to the largess of Keith Thornton. The man is hip-hop’s reigning king of dissociative identity disorder. Far from confounding his fans, hip-hop fans treat each change like Tara Gregson’s family on Showtime – they show love and try to roll with the punches no matter how crazy things get. Not every personality results in #winning rap music. Sometimes that’s due to Keith’s inability to reign in his fetishistic impulses, but more often it’s his insistence on self-producing noisy electronic beats. When Keith marries a new personality with a great producer the result is compelling, bizarre, raw hip-hop that leaves you greatly entertained. That’s why despite the flops Kool Keith fans keep coming back for one more fix.

“Tashan Dorrsett” was originally one of those flops. Mr. Thornton does so many side projects, bootleg albums and spur of the moment recording sessions that even the most dedicated Wikipedia editor would not be able to keep up with his prodigious output (not to mention his/her work would be undone by some Notability Nazi). As such bad Keith projects can fly under the radar to even his most dedicated fans, although “Tashan Dorrsett” did make a couple of blips here and there in the music world. Tashan was billed as Keith’s most down to earth new alter ego, “being real and regular, dealing with daily life situations.” Fans chose not to buy the hype and the press releases full of sound and fury ultimately signified nothing but #epicfail. No birdies gave a tweet about it.

“The Legend of Tashan Dorrsett” gives Kool Keith a second chance to do it the right way, enlisting a star-studded crew of remixologists to take the best songs from the 2009 release and re-imagine them with 2011 beats, nearly halving the number of tracks in the process. Gary Grice may be tired of getting quoted for it but “half short and twice strong” is still a great rule of thumb for hip-hop artists, and on this new release Keith definitely benefits from application of the rule. Some of the producers reinvent themselves in the process. Those who had written off Marley Marl as unimportant in 2011 may want to listen to his remix of “Supa Supreme” and reconsider. This tracks snakes, rattles and rolls over crispy drums, echoing ambient sounds, strong bass and audio snippets of almost human voices throwing out almost human syllabic sounds. The instrumental would be a star on its own, but Keith’s keep it real lyrics stick to the track like Krazy Glue:

“The Screen Actors Guild is overcrowded with nothin right now
Everybody’s bluffin right now
Wastin film and camera time, tryin to expose yourself
to the masses with a camera rhyme
New York and Hollywood don’t need you there
Better people than you comin from North, South Caroline
You just a shipmate, ready for me to Elimidate
Cancel your network, feed the canaries that’s right y’all
Now you’re officially over”

Agallah Don Bishop goes in on “Above Sea Level” and takes it to the next level on a track that hangs with Keith no matter how deep he delves into his concept, “with heavy EQ/mechanical nigga workin hard like R2-D2.” DJ Junkaz Lou comes through several times. He gives a sexy deep bass funk to “Glamour,” Keith’s duet with Marc Live, and Big Pun scratches hold it all together. “New Shhhiiit” is overloaded with samples, but Lou manages to give the rapid-fire spoken word poetical ramblings more than a semblance of actually being song. “Magnetic Junkadelic” is what happens when a throwback track complete with cameo appearance by Ced Gee meets a minimalistic modern day track by The Pack. “Flow Smooth” was the only track Lou didn’t create magic with – ironically it’s lack OF smoothness left me flat.

Other winners on “The Legend” include Domingo’s revisitation of “Black Lagoon,” which rises up from the depths like Loch Ness over banging pianos. He also gives a 1970’s TV detective bow-chicka-POW swing to the title track. Still the hits do come with misses, as I’m not sure what the fuck Ariel ‘The Cartel’ Caban was going for on “The Real Beginning.” It’s quiet, it’s lacking thump, it’s totally uninspiring. Mr. Sche’s take on “Booty Clap” is going for a P-Funk kind of appeal, but it feels like a poor imitation of George Clinton. Above all “The Legend of Tashan Dorrsett” is an improvement on the original, but those who are not fans of Keith’s eclectic rhyme style will not be won over by lines like “ladies purr, when I put my hand in they fur/they all scream for food, extra ketchup on the hamburger.” WHAT? Sometimes the less you try to make sense of Keith Thornton, the better. If you weren’t feeling the original give “The Legend” a chance, and if you never heard the original but are a Keith fan you should grab this one too. Keith’s the original #tigerblood emcee of hip-hop, with a girl on each arm, who is so alpha his mind reached Alpha Centauri a long time ago.