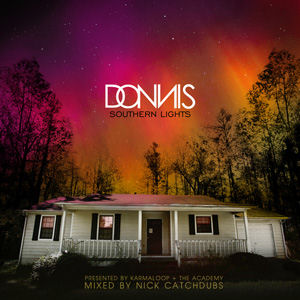 I forgot what the Bubba Sparxxx-coined New South stood for (in case it was more than an attention-craving catch phrase). If it served to drum up interest for a new generation, the south steadily broke artists in the last ten years, so there certainly hasn’t been a shortage of new southern rappers in the past years – B.o.B., Waka Flocka Flame, Big K.R.I.T., Yelawolf, Dorrough, Pill, CyHi Da Prynce, Playboy Tre, Travis Porter, et al. ATL MC Donnis basked in the spotlight a few years back thanks to his breakout hit “Gone,” being signed to Atlantic in 2010 and subsequently joining XXL’s Freshmen. The major label full-length has yet to materialize, so Donnis hits us with another free offering, “Southern Lights.”

A female voice welcomes us to the “New South” (or “new south” in case Bubba got that one trademarked), with another woman translating to Japanese. With its lush beat by Needlz and vocal contribution from Big Rube, the intro combines a laid-back atmosphere with artistic ambition, as Donnis provides the ambivalence fit for these uncertain times:

“I have nightmares of fallen rappers
Kris-Kross-ed, Jump-ed ship and rockin’ clothes backwards
30 million dollars blown, MC Hammer
Nail in the coffin, career turned disaster
I don’t wanna see what come after
the lights go on and the fans leave the rafters”

The self-proclaimed ‘Atlanta Brave’ chases the nightmares away with daydreams, confident about his potential: “I’m 3 tapes in it / But every hit a homerun, Donnis want the pennant.” The title of the following “Get Up Get Out” makes one think of a legendary OutKast/Goodie Mob collaboration, yet the song lacks the deeply inspirational vibe of “Git Up, Git Out.” Instead, Donnis celebrates a daring lifestyle on “Y.W.I.,” whose antics are summed up by the hook “Young, wild ‘n ignorant / we don’t really give a shit.”

Throughout “Southern Lights,” Donnis’ lyrical concoction of hedonism, sincerity and punning falls in line with the current crop of up-and-comers. These youngsters have yet to reach the level of Devin The Dude, but they have time to grow. In 2011, Donnis is still testing the waters, with some indie sampling (Lykke Li for “Everybody”), a Dev feature (the girl behind the “Like a G6” hook), a consequential Cataracs production (“Penthouse Suite”), etc.

Organically enhanced elevation is a frequent topic (“Eyes Low,” “Penthouse Suite,” “Everybody,” “Me & My Boo”), while a handful of tracks delve deeper. “Blackberry Molasses” revisits the soulful (and surprisingly mature) ’96 single by Organized Noize protegÃ©s Mista (Bobby Valentino’s first group), Donnis traveling back in time to his school days in the first verse and coming back to the present in the second:

“PSA” deals with the career woes of the former US Airman, Donnis closing with the well-put “Fuck famous, let’s get legendary / so all our mamas and our sisters ain’t secretaries / cause as of now it look hereditary.” (Although, just for the record, secretary is a honorable profession and certainly beats the occupations rappers often champion.) “Move On” is a cocky put-down of the rap competition, and the closing title track confirms that Donnis has a strand of Dungeon Family in his artistic genealogy.

“Southern Lights” ain’t no “Friday Night Lights” (J. Cole’s acclaimed release from last year). But it is more than your typical tide-you-over tape. It’s a mixtape nonetheless, perhaps even in the best sense of the word – a little something to vibe to (with subtle mixing provided by Nick Catchdubs) from a vocally versatile and potentially worthwhile rapper.