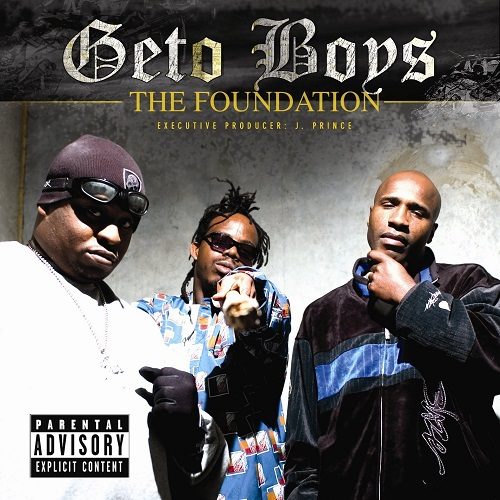 The Geto Boys have always been a little bit ahead of their time, which is why after a career spanning three different decades they’re still having to fight for the props and recognition they deserve. Early in the life of the group when the membership had settled into the familiar trio of Bushwick Bill, Scarface and Willie D, the Geto Boys proved to the rap world that there was no such thing as negative publicity. When Geffen records refused to distribute “Grip It! On That Other Level” due to the graphic nature of songs like “Mind of a Lunatic,” they unintentionally made the Geto Boys a cult phenomenon, assuring both the album and the group’s future success. Things got even hotter when the trio released “We Can’t Be Stopped” in 1991, which depending on your point of view featured the most disturbing or most brilliant cover art of all time. The album shows Bushwick Bill being pushed on a gurney through the hospital by his labelmates, talking on a cell phone, shortly after his eye had been shot out in a drunken domestic dispute (Bushwick later recounted the story on the song “Ever So Cleer”). Parents and media critics were outraged, but the more they decried the album and the group the more they fueled it’s success. With almost no radio or video exposure save for the brilliant “Mind Playing Tricks on Me” single, the record pushed platinum status and assured their iconic status not only in Southern rap but in the hearts of hip-hop fans worldwide.

Unfortunately the 1990’s proved to be a perplexing time for the group’s fans, as the trio seemed at times more interested in their solo careers than achieving more success as a unit. As a result the group went throughs several lineup changes, with Big Mike replacing Willie D on “Till Death Do Us Part,” Willie D returning on “The Resurrection,” and Bushwick Bill completely absent on “Da Good Da Bad & Da Ugly.” Some even started to wonder if the Geto Boys had been a fluke from the start, since the most famous version of the group only came about when the original members Johnny C and Jukebox quit and forced Rap-A-Lot CEO Lil’ J to recruit two solo artists and a dancer (Bushwick) to replace them on the next record. By luck or design the combination was so dynamic that the original group became an afterthought (do yourself a favor and avoid their “Making Trouble” debut, it’s a terrible record) and for all intents and purposes they became the REAL Geto Boys, but they just didn’t seem fated to stay together for more than one or two records at a time. Try to imagine De La Soul records with Plugs One and Two randomly deciding whether or not they wanted to work together, or Run-D.M.C. records without D.M.C. (actually that more or less happened on their final album “Crown Royal” and it sealed the group’s fate even before Jam Master Jay’s death). Rap fans really only wanted to hear the Geto Boys one way, and weren’t afraid to crap on anything less than the trio together at their best.

Fortunately with the passage of time (and/or the lure of big money to be made) the Geto Boys have realized that as great as they are on their own (Scarface’s solo career in particular has made him a household name) they’re even better together. “The Foundation” is an aptly named record since it reunites the three members who to the public and their fanbase are indeed the foundation of what the Geto Boys have been and should be. Their record is a testament to how hardcore reality rap should be done, and it starts with the explosive Scarface produced single “Yes, Yes, Y’all.” Pounding dark piano keys, booming bass, and perfectly chosen synth weave together the individual rappers into a cohesive whole, each sounding like they were ripped straight out a cryogenic deep freeze lasting since ’91:

Scarface: “Give it up for the invincible, it’s H-Town’s finest
The GB, the general, the street shit, the timers
The motherfuckin criminals, see we keep it grimy
You niggaz chemicals, the weed got you blinded
I’m the original, the author of this G-shit
You niggaz pitiful, cause y’all be on some weak shit
Me I’m a nigga from the gutter motherfucker
If rap wasn’t payin I’d hit the street cause I’m a hustler”

Willie D: “It’s Willie D y’all, it’s been a minute y’all
I’m still in it y’all, fuck the critics y’all
Hoe niggaz make me hotter than tabasco
Play with my money I’ma kick you in your asshole
I see the videos, I read the magazines
Don’t watch award shows, too many faggot scenes
I’m a machine, got a pistol in my loose fist
I’ll leave you twisted on the ground in your boots bitch”

Bushwick Bill: “Well this is Chuck Dawg (will you ever love another bitch?)
Fuck nah! (What’s your position on a snitch homey?)
Fuck laws! (They say the Beatles was the biggest)
Nigga fuck Paul, and the rest of y’all!
I’m the little motherfucker with the big dick swangin
Nuts still hangin, got hoes singin the blues
Geto Boys in this bitch still bangin
And ain’t shit changin (uh-uh) ain’t shit changin
Don’t like faggots, hate politicians
Can’t stand snitches, know the Feds listen
So I, send the whole world a fuck you note
Schumaker’s got a desk job, fuck you hoe! (Aww nah!)”

It’s violent, misogynistic, homophobic, and definitely NOT rated E for Everyone. Then again, the Geto Boys never have been – other than 2 Live Crew or AMG they may be the epitome of why many rap albums carried not only a parental advisory but a “must be 18 to purchase” sticker throughout the 90’s. The Geto Boys have not changed up their approach, delivery, or “to hell with you” attitude one bit, and that’s why they’re still relevant. Fans want to hear Willie D spit lines like “we chin check bitches, we don’t go for that hoe shit” on “When it Gets Gangsta.” Rap heads want to hear Bushwick Bill at his sadistic best saying “cops ain’t about shit; want us to walk the straight and narrow when they crooked like dicks” on “What?” The hip-hop heads are waiting for Scarface to offer classic street knowledge like “you fuck around, get indicted, ain’t no tomorrows” on tracks like “Dirty Bitch.” It’s all about giving the people what they want, and the Geto Boys don’t try to fuck with the formula that made them popular back in the day. If you read between the lines, the Geto Boys are not actually advocating rape, murder and mayhem though – they’re giving a graphic, cinematic portrayal of the best and worst that Houston, Texas’ own 5th Ward has to offer. Pay close attention and they’re actually sending the message “this is what happens when you fuck with drugs, guns and gangsters – if you want to live this life you’d better know what you’re getting into.” They even offer a surprisingly thoughtful and somber song on the Tone Capone produced “I Tried,” a track which one might expect on a Scarface solo album but which is a pleasant surprise halfway through this CD.

It’s hard to capture lightning in a bottle twice, and the Boys have been down this “let’s get back together” road before, but this attempt may be as successful if not moreso than any other to date. Only a few tracks seem to miss the mark, and that has more to do with the production than the rhymes. “We Boogie” doesn’t feel like anything you’d gangsta boogie to – in fact the track is vaguely unpleasant and doesn’t improve with repeated listens. “Leanin’ on You” is another surprising song on the album, in this case for Mr. Mixx’s attempt at a Kanye West style R&B backdrop. For the most part it works, but it doesn’t seem to match the Geto Boys style, so it’s not something they should try again. “Real Nigga Shit” has an annoying whistling backdrop that sounds like somebody leaning on the pitch shift wheel of an expensive keyboard while holding just one note. Thankfully these flaws are few and far between, making “The Foundation” an impressive comeback for a group many people wrote off a long time ago. Scarface may be a big shot as the CEO of Def Jam South and a successful solo artist, Bushwick and Willie D may have their own solo projects, but they all still sound great together – better yet, they sound NATURAL together. This is a lineup that works, and let’s hope they’ve finally realized it and never fuck with it again.