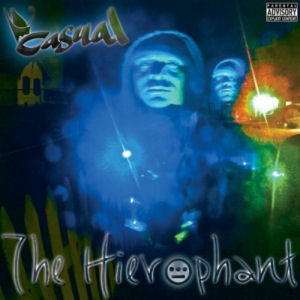 There are at least two definitions of “hierophant” depending on which sources you check. The common dictionary definition describes a person of religious importance who leads his congregants to what is holy. The rap dictionary definition by Jon Owens b/k/a Casual is “a person who deciphers arcane knowledge.” That’s arguably related since a high priest with the title of hierophant would certainly translate arcane knowledge so the religion’s followers could heed its doctrines. I’ll propose yet another definition though, one which many readers probably came to on their own: “founding member and spiritual leader of the Hieroglyphics.” When the history of this important and influential rap crew from California is written, his name along with Del the Funky Homosapien’s will be in the first paragraph of the first chapter.

Despite his importance to their history, “The Hierophant” has been far from prolific as a recording artist. Casual goes anywhere from three to six years between albums, and several of his releases have only been available through the Smash Rockwell” dropped. He had been quiet as a soloist since, but as has been true throughout his career he’d always pop up for a cameo appearance or a single remix here or there both in and out of the Hiero camp. It’s probably safe to say that Casual doesn’t feel any pressure to crank out music, but it’s also safe to say that his low profile doesn’t lead to high demand. Casual lives up to his name – relaxed and chillin’. He’s not taking the game over, just playing a hand when he wants to.

This time out “The Hierophant” is a little more broadly accessible, even available on Amazon.com

. To get the facts out of the way in advance, all songs other than “Shrimp Fried Rice” are produced by Toure, well familiar to Hieroglyphics fans as both a DJ and producer. (Incidentally that other track is produced by The Elect.) Depending on which version you get, “The Hierophant” comes with either 13 or 14 tracks, the floater being 160 seconds called “Alligators, Gumdrops, Jelly Beans” – the title sounds more like a Kool Keith bonus track. He sets out to define his style on the opener “Man Wit Hustle”:

“Y’all niggaz wanna bang? I’ll have you like ‘Casual be trippin!’
Wore blue to the Republican National Convention
I’m a boss – no that’s my actual position
With chicks, I take my pick, like I just got my natural conditioned”

He’s a little pimp to be sure, but he wants to make sure you don’t take him lightly lyrically on “Mic Memorial”:

“Aiyyo just so you boogie don’t overlook me
I still rock a show with rookies, the flow is cookies
dipped in milk, Spider-Man dipped in silk
I gangsta lean and live to tilt
Sit and mic check H deuce
See the seven-deuce Monte Carlo? Yeah that’s the Gray Goose
I’ll right hand your hype man
While the crew bogart your bodyguard
We so hard, yakuza leave your body scarred”

First timers to Casual will quickly learn two things – he’s got a deep commanding voice, and his name doesn’t just reflect his attitude ABOUT rapping but the WAY he raps. In pacing his closest contemporaries would be Evidence and PMD. The song titles tend to reveal as little regarding the content as possible. “Bombs” has a shuffle drum track, gospel singing and braggadocio like “you speak of emcees, half of ’em fear me/I step in in African jewelry from Alpha Centauri.” The laid back jazzy track “You Like That” is a throwback to the early-to-mid 1990’s Hiero sound. At first you might think “Where Do I Go” would be inspired by Casual’s guests Nate’ and Thomas Pridgen (on drums) toward the more profound, and he talks about “making it through this” and “finding the power in you” between verses, but mostly brags about his “marvelous sculptures” lyrically. It’s not a negative to say he’s not preaching or teaching though, because the ease with which he flows is a lesson in itself.

Sadly I’m here to say that “The Hierophant” is one of those hip-hop records in 2011 that’s probably going to slip below the radar. Some (perhaps arguably most) Hiero-related records aim for a discerning fanbase with a specific taste and don’t really worry about creating crossover hits. If internet radio were the predominant format for exposing people to music or college radio had the broadcasting tower power of its commercial counterparts, there’s still no guarantee this would be a big seller. The irony is that Casual’s solo debut album “Fear Itself” is one of the highest commercially charting Hiero albums of all time, which says a lot about how the Jive/Zomba label he was signed to at the time cherry picked songs to create videos and release singles for, upping his exposure and creating more demand. That market hasn’t disappeared in the last 17 years, but it’s harder to reach now than ever before. You shouldn’t let that dissuade you from checking it out if you’re a fan of Casual or the Hierogyphics crew as a whole, but it’s fair to say this album expects you’re already one or both. This is an insular album.