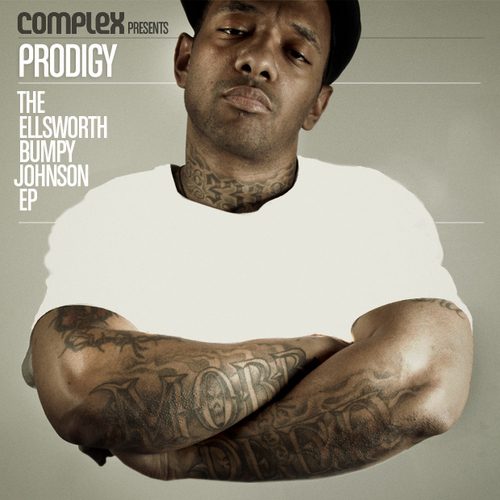 With a name like Bumpy, you have to be bad – and he was. In fact Ellsworth Raymond Johnson may be one of the top criminal minds in Harlem history, let alone in the annals of organized crime in the United States. In an era where Italian mobs held power and control over every racket in New York City, Bumpy stood toe to toe with them and gave no quarter, and in due time Bumpy not only earned their respect but that of Harlem’s criminals as well. He progressed from running a numbers racket to being an out-and-out kingpin of crime, and it was said during his heyday not a deal went down in Harlem without Bumpy’s approval or say-so. His story has taken on legendary and arguably mythical qualities, and he’s been portrayed accurately or otherwise in dozens of movies.

Just released from a three year stay in prison on gun charges, Albert ‘Prodigy’ Johnson was “Infamous” long before that as one half of the now legendary rap duo Mobb Deep. They don’t play on illegal firearms charges in New York City – just ask Plaxico Burress – but some would argue he had a right to self-defense given he’s been held up for his jewels before. Then again when you’re a famous rapper, that’s what you pay a bodyguard for, and New York rappers often get an extra unwanted scrutiny that could result in his bust anyway – their relationship with the police has a long acrimonious history. The point is Prodigy knew the risks and took them, just as he is taking one now by giving away his first new music since being released from prison for free. He’s not necessarily looking to win new converts though – just to remind people he’s still a force to be reckoned with.

“You can call me – whatever the F you feel best
Just as long as you spell my name right on the checks
I’ma, keep doing what I do so well
Truth be told, without money I would still spill
all of my thoughts into the beats
This is my passion, my baby, I breathe…
… eat sleep and shit soul music
Watch how my song touch you, it’s spiritually moving”

After a short skit The Alchemist produced “The One and Only” opens up the presentation. Older heads may recall that Parrish Smith from EPMD was affectionately called “Slow Flow” for his delivery on the microphone, but Prodigy could make Parrish sound like a methylphenidate addict by comparison. Even “laconic” would be an understatement, but long time collaborator Alchemist understands this and provides a slow rolling dark and gritty beat for P to flow to. Sid Roams seems to be a prodigy of Alchemist in that respect, as he employs an equally dank and measured musical prescription for what ails P on “Go Off.” There’s an interesting twist here given that Prodigy told Complex that at one time he thought Notorious B.I.G. was “corny” and was biting lines from Mobb Deep. The opening verse is either payback or an apology to his fans as a tribute:

“Ha ha ha ha, I’m laughin with my Mobb
While you remain confused by me, the Prodigy
I put my verse you put yo’ verse in, we see who really burnin
And spittin flames, for certain, yo check it
My 16 pon’ fire, the rap Spike Lee
Lot of multi-million dollar rapper don’t like we
But they can’t do shit, cause I’m too consistent
Plus my street power not to be test, no”

Roams spices up the melancholic melody with sparkling instrumentals and sample stabs of R&B singers. The tune gives one the feeling of stomping through a dark haunted forest from a fairy tale, with owls crooning “WHO… WHO” every few seconds. Prodigy describes his style here as “not the punchline rapper […] no gimmicks, no artificial flavor” and it’s likely no assessment of his style here could be more accurate than his own.

As what was apparently a short EP grows longer and longer, clocking in at over a half hour, Prodigy’s insistence on sampling from the movie “Hoodlum” grows a bit wearying. It’s not as though the dialogue adds or subtracts to the point he’s making, or as though it’s being chopped up to sprinkle into his songs, proving he’s a worthy Bumpy Johnson successor. The usage could have been clever but instead makes you just want to pull out your copy of the DVD and watch Laurence Fishburne do his thing on the big screen. Let’s give Mr. Johnson credit where it’s due for sharing a last name with a known criminal and deciding to tie that into marketing a free download, but one can only imagine what a more imaginative mind like DJ Premier would have done with the movie samples as opposed to cut and pasting monologues before each song.

Roams continues to work his dusty magic on “Black Devil,” where P notes that “the devil doesn’t have a skin color or complexion” as he rails against those of any race who would betray or sell him out (perhaps an allusion to his feelings of ill will towards another New York rap group). “Twilight” reunites P with his Mobb Deep brethern Havoc, although here Roams actually shortsells what should have been a much bigger moment by not capturing the “heavy metal for the black people” sound Mobb Deep had for much of their career. Alchemist takes control again on “For One Night Only” but he too falls short of the mark. His beat fits Prodigy’s experiment with a speedier flow well, but lacks in the head nodding department that would make it bump in the whip. P’s lyrics keep it interesting with metaphors about investing in him like the stock market, promising “healthy returns” and if “you buy me I pay you with music that’s amazing.”

King Benny may be the unsung hero of this EP, as his work on “Stronger” is a spartan affair that seems as well tailored to P’s flow as any of the opening work by Alchemist or Roams, although the latter returns to strength on the closing bonus track “Told Ya’ll.” On the whole “The Ellsworth Bumpy Johnson EP” is enjoyable, but for a rapper who professes to be beyond gimmicks his first release post prison is relying HEAVILY on one to create a mood and atmosphere for his music. I think given a three year layoff P can be given the benefit of the doubt for a while, especially since he’s not charging for this one, but on his next full length solo album or Mobb Deep group album the bar has to be set higher.