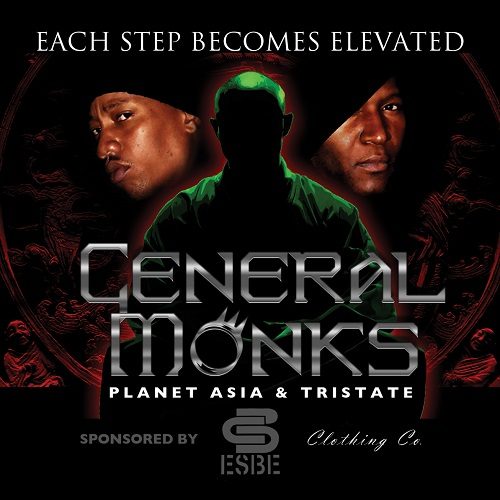 “Each Step Becomes Elevated” is a free album being released by Cali rappers Planet Asia and Tristate as General Monks. The concept of the album is that they are warrior Buddhist monks using any means necessary, including rapping, drinking, and fighting back. Each song is set up with an audio clip of what sounds like a BBC documentary about Buddhist monks fighting oppression in Rangoon, rapping as MC Happiness, and getting their drink on.

As the concept suggests, this is a sometimes uneasy combination of hardcore hip-hop and conscious rap. There is an aggressive, militant vibe to the album that is tempered by the Buddhist bent of righteousness. There are also jarring transitions between fist-pumping calls to action like “Moors Code”, and more mundane celebrations of hedonism like “Bar Season.”. It’s another example of hip-hop criticising street life while celebrating it, but the addition of the militant/Buddhist angle makes it even more confusing.

Speaking of confusing, some of Asia and Tristate lyrics are downright impenetrable, coming off more as disjointed conspiracy theories than profound statements, dropping bars about being “surrounded by a circle of fire/God in person of the highest, the Messiah” right next to lines about “smacking the shit out the flow.” You get the gist of what they are saying most of the time, but there are moments when you ask yourself, “how the hell do UFO’s fit into this?” It works better on tracks like “Trouble” and “Keep It G,” when the rappers concentrate more on street life than the philosophy. There are only a handful of moments where the album threatens to be too self-serious for its own good, and Asia and Tristate’s commanding flow manages to make even the most confusing or overly ornate lines work.

The beats, like the lyrics, offer a combination of hardcore hip-hop and backpack rap, vacillating between scratchy samples and pounding synths. The best tracks are Khrysis and Evidence’s futuristic funk “Hand Blocks,” DJ Wool’s soulful loop on “Keep It G,” Religion’s chopped-up loop on “1080p,” Josh the Goon’s hard-as-nails “Trouble,” and Jansport J’s piano loop on “We That Shit.” Asia and Tristate are backed on the mic by Styliztik Jones, Ras Kass, Killer Ben, Montage One, Killa Kali, Krondon, Phil the Agony, and female rapper Rogue Venom.

“Each Step Becomes Elevated” is a solid mixture of Wu-Tang type mythology, conscious rap, and street rap. The ghetto monks theme is sometimes confusing and contradictory, but Planet Asia and Tristate are excellent rappers who manage to sell the concept. The beats are solid throughout, making this feel more like an official release than a free download. While not perfect, the General Monks’ hardcore approach to conscious rap makes this worth the download.