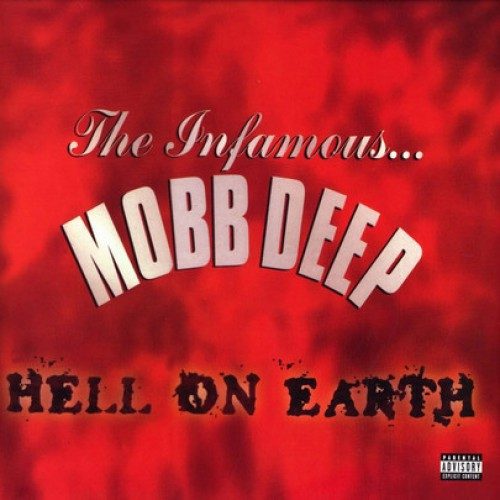 It’s the Infamous, back in the house once again… but they weren’t always infamous. They used to be signed to Island Records, where they released a little known album called “Juvenile Hell” featuring dope songs like “Peer Pressure” and “Hit it From the Back” (even Ras Kass mentions this one in his cut “Drama”). With no label support and no media push, the album went nowhere. Fortunately, Mobb Deep left Island and got signed to Loud/RCA, and the careers of Havoc and Prodigy blown up ever since. At last, with their solid third LP, Mobb Deep has come full circle from a Juvenile Hell to expanding their personal hell outwards – bringing Hell on Earth with guests like Nas, Big Noyd, and the Wu.

Mobb Deep is not a bastion of positivity or a carrier of the afrocentric torch. Their lyrics are uncut, unpolished, raw and hardcore; their beats are equally creepy and ominous. Mobb Deep’s unapologetic flow and subject matter make the album work; there’s no crossover songs or dedications to mom and baby boo — it’s pure male machismo and fat rhymes. Lamer MC’s couldn’t pull off this much violence in rhyme without coming off perpin or fake; but the Mobb are veterans despite their young age and they know how to flow on the mic and make their topic both credible and intriguing.

A perfect example is “Extortion,” their duet with a fellow Loud/RCA artist, Method Man from Wu-Tang Clan. Havoc and Prodigy toss back forth rhymes about doing ninja style shit, and leaving unsolved mysteries for the cops to discover. The beat is composed of a wailing shriek, some low bass organ keys, and a thumping heavy bass – pure hip-hop bliss. Havoc sets up Method’s introduction with the admonition “Take it like a man you little bitch!” and Meth immediately backs it up with “I blaze yo britches, PLO extortion, you forcin The Hand that Rocks the Cradle…” This is not a song to dance to, this is a song to snap your neck to and get a chill down your spine at the same time.

Like the second track of this album, the Mobb is dropping gems all over. Especially on “Drop a Gem” they take no prisoners with lyrical jewels, including the now deceased Tupac Shakur (who made some rather vulgar references to Mobb Deep in his song Hit Em Up). From the opening through “G.O.D.Father Pt III,” the album is almost nonstop lyrical molestation, and although it slows down a little towards the end, the overall result is still a suprisingly good third album. It’s not necessarily new or innovative, but if you can do one thing and do it well, keep doing that shit. Mobb Deep knows.

ORIGINAL HEADz UP! score: 5 out of 6 (converted to RapReviews.com)