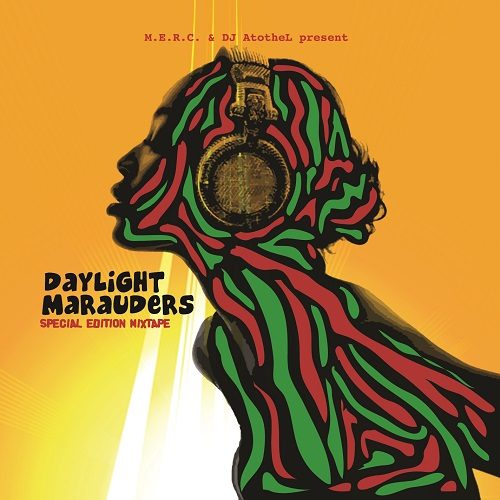 There are various ways to pay tribute to the music we love. For a period, cover versions were quite popular in hip-hop, but even coming from professionals too many of them sounded like rap karaoke. In a genre where originality is key, there are definitely classier ways to pay tribute. Hence M.E.R.C. and DJ A to the L give us – free of charge – ‘a tribute to a classic.’ The classic being A Tribe Called Quest’s “Midnight Marauders,” the classy tribute going by “Daylight Marauders.”

Here’s how they did it. Whenever possible the duo used the original beats. The rest, four tracks out of fourteen, were reinterpreted with the samples Tribe used (one stemming from producer The ARE’s 2007 project “Manipulated Marauders”). These ‘reproduced’ tracks end up adding a special note to the project, not only lending musical credibility to the team, but also acting as a promise for future, original ventures. On the vocal side, they have a capable leading man, who, although soft spoken and relaxed, doesn’t automatically recall Q-Tip. A Phife there is not, but a variety of guest rappers (among them an opinionated DJ A to the L) make sure that the ‘tribe’ idea is sustained. Penning their own lyrics, the vocalists on “Daylight Marauders” still manage to reference the Abstract, Phife Dawg and their guests with short puns and brief quotes. I don’t want to spoil the experience, so I’ll just say that if you know “Midnight Marauders,” you will definitely notice the subtle tributes. The fact alone that they even tracked down the computer lady from the interludes and got her to adapt her announcements shows the level of dedication at work here.

But “Daylight Marauders” is more than a bow to bygone times. For instance M.E.R.C. points out how much he values daytime. He offers to make “a way like I’m leadin’ the blind” if you “let the daylight just bleed through the blinds” on the opening “Tour Guide,” and on “Midnight to Daylight” he discloses that he likes “to come out when street lights go out,” presenting himself as a working man in whose life music still plays an essential part: “Gotta start the day on my 9 to 5 / You know rappin’ to these beats, that’s the way I survive.”

Another aspect unique to “Daylight Marauders” is the local pride shown by the Tallahassee residents. Instead of a world (‘award’) tour, they take us on a “Florida Tour” (with Kim D taking the place of De La Soul’s Dove). While hazarding that this project might not find too many listeners around his way on “Stir Crazy,” M.E.R.C. doesn’t hesitate to name-check Florida rap veterans JT Money and 69 Boyz in the same song. More commonplace is his dissing of the current rap scene. Him and Kim D “throw the ‘sucka’ in the front for the ones that front” on “Sucka.” The criticism isn’t always particularly original, but can hit where it hurts, like on “Let’s Roll”:

“These labels don’t feed you like they used to
They got you tryina figure numbers out like Sudoku
Think that you’re the shit but you’re just a pile of doo doo
Think you kill ’em better than M.E.R.C., you must be cuckoo
I got a clock with your name on it
Hannibal Lecter, I got a plate with your brain on it
Bon appetit; have a parade, so I can rain on it
No white tee cause I surely put a stain on it”

But while A to the L lets loose on “Get Down” (“I still be playin’ KISS tapes in the car, and WHBI and ‘BLS, too / cause that old shit still be soundin’ better than you”), M.E.R.C. opts for socio-political observations (“The rich folks’ stomach on sumo / they proud to go to Harvard, we proud to go ju-co”). Which brings us to the mixtape’s standout track. Striking in several ways, “8 Million” only initially recalls Skeff Anselm’s original beat because the duo samples Bola Sete’s “Bettina” more extensively, the melodic guitar creating a meditative atmosphere that fits M.E.R.C.’s existential ponderings like a glove:

“I don’t pray daily
And I don’t even blame God if He don’t save me
And I know that sounds crazy
but I wonder what makes Lucifer chase me
Whatever it is, I’ma persevere
Right now I can’t afford to be cavalier
cause my ceilings got cracks, no chandelier
All that’s left in the fridge is a can of beer
So I go to work, no breakfast
Hunger pains in my stomach big like Texas
Hit the clock, breathin’ in asbestos
Bottom of the totem where them mo’fuckers left us
And now my fat supervisor
talkin’ ’bout a deadline, sparkin’ up a lighter
suckin’ down cancer, smellin’ like a diaper
I ain’t no company man, I’m a writer…
Yeah, but I’m a slave to machines
Keep ’em buzzin’ like bees just to make a little green
This is everyday routine, makes me wanna scream
The ones who have color are the people that they screen
randomly, it’s insanity
to have that lumen overhead like a canopy
I feel like the system keep slammin’ me
into the wall, can’t provide for the family
If money is the root of all evil
and people make money, then what do you call people?
When God was creatin’, did He see this on the easel?
Did He mean for our minds to be feeble?”

Ten years ago this website went ‘Back to the Lab’ with “Midnight Marauders.” Author DJ Flash praised the fusion of beats and rhymes, saying he couldn’t ‘even imagine them separately.’ M.E.R.C. and DJ A to the L have the audacity to not only imagine a separation but to perform it and present it as a ‘tribute.’ Some might view such a thing as a sacrilege or just plain unnecessary, but I am convinced that they pretty much made the best out of the premise.